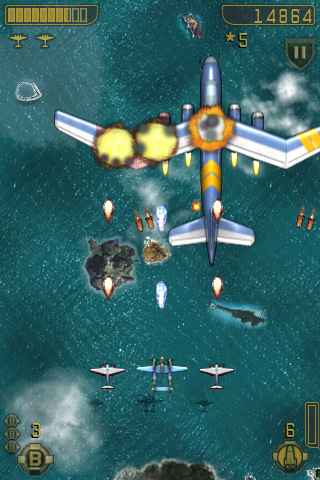 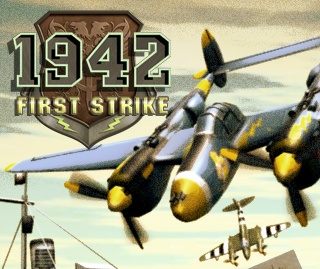 In 2010, Capcom brought the series into mobile territory with 1942: First Strike for the iOS, which is actually a whole new game, despite some similarities with Joint Strike. The game has a similar look and practically identical menus, although it’s entirely in 2D. The touch controls aren’t nearly as precise as the ones in Cave’s mobile games, considering there’s quite a bit of lag in movement, but the screen is rarely hopping with enemies, so they function well enough. The pace is slow and plodding though, keeping with the XBLA/PSN release. The playing field is fairly wide, requiring the screen to scroll back and forth, which leads to lots of annoying blind spots.

The major difference here is the inclusion of weapon upgrade elements, similar to the NES version of 1942. As you earn coins, you can upgrade your ship/s speed, attack power, defense, and enhance various weapons. In addition to the heat-seeking missiles available at the outset, you can also buy a shield, as well as the ability to heal yourself. While the shop gives a nice incentive to score well so you grow stronger more quickly, it also necessitates the need for grinding, which is annoying.

There are also two “chapters” – the original one, consisting of eight stages where you fight against the Japanese (who seem to use zeppelins this time around, apparently), and a second one, consisting of five stages where you fight against Nazi Germany. The second campaign is quite a bit more difficult and adds a new boss plane. There’s also a stupid trench-run bonus stage that’s completely unsuitable for the games’ touch screen controls.

It’s visually bland and outclassed by many other shooters on the iOS marketplace, but 1942: First Strike is actually fairly feature rich, and given the incredibly cheap price, may be worth a bit of time, even though that’s damning it with faint praise.