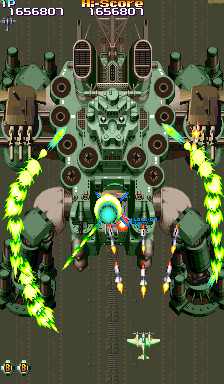 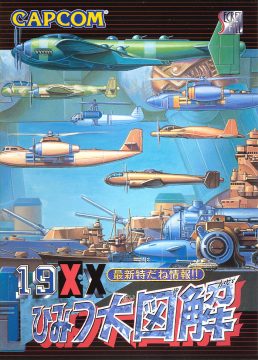 19XX is an even bigger improvement for Capcom’s series than 1941. Dropping the World War II setting, 19XX takes place during a fictional war, possibly set in the future. Everything from artillery cannons with ten guns, to trains that shoot lasers, to walking tanks is present, showing some very imaginative enemy designs. 19XX‘s graphics are easily some of the best in the series. The sprites are large and colorful. Most of the levels take place in very lush, natural environments such as dense jungles or remote and beautiful islands. 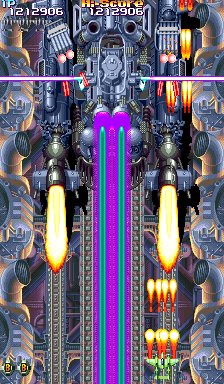 19XX drops the health bar in favor of a more traditional shooter feel, so you now die in a single hit, and it uses a standard bomb stock instead of spending health to clear the screen. The bullet patterns are also thicker, While there are bullet patterns to navigate, 19XX opts more toward faster, Raiden-style bullets and never makes the patterns too complex. It works very well, as 19XX feels both contemporary and old school. The arsenal has been reduced to three weapons: the vulcan, the 3-way missiles, and the laser. You also have the ability to charge your bombs. Hold down on the bomb button and release when the bar fills up. Your bomb will be much more destructive and inflict a lot more damage the more you charge it. Unfortunately, lower level bombs do not clear the screen like normal bombs, and the higher levels can take a while to charge up, leaving you a sitting duck while you charge up. It’s a cool idea, though.

While 19XX does a lot to revolutionize the series, its biggest contribution is the addition being able to select your fighter. There are three planes to choose from, all of them being powerful in their own way.

Lightning is good all around. It has above average homing and speed, but it is a bit lacking in power. Its special weapon is a powerful vulcan cannon that pours molten hot lead into anything dumb or slow enough to get in its way. Fitting Lightning’s theme, the vulcan shots do not do too much damage, but their rate of fire is very fast, making it deceptively powerful.

The Mosquito hits hard, so hard that it sacrifices its homing and speed. Its special weapon is a spread gun that shoots in three directions. At first, this seems like a pretty bad weapon, as it spreads out The Mosquito’s deadly power and makes it harder to hit with. However when it upgrades, the spread shot shoots three additional tiny missiles in the center, not only focussing the attack, but keeping your previous spread shots to cover you from the sides. It is an ingenious weapon that takes some time to get used to, but quickly becomes one of the best weapons in the game.

The Sinden (sometimes spelled Shinden) is the fast plane of the bunch, being easily the fastest of the selectable planes. Its power and homing are pretty bad, but all that speed can make jetting around and blasting enemy formations a breeze. The Sinden, like the other planes, has a special weapon that easily compliments its strength. It has a laser that pierces straight through enemies and is great for clearing out formations. With the Sinden’s speed, you can zip across the screen and sweep away anything that even tries to get close to you. When upgraded, the laser doubles in width and power, making it easier to sweep the screen than ever. 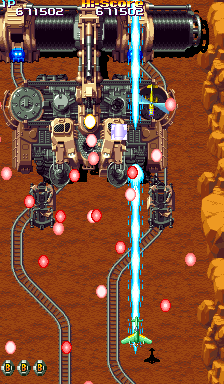 There are seven levels in total. It’s not nearly as lengthy as some of the other games in the series, but the levels are decently sized and portray a variety of exotic locations. The missions are also more interesting, from fighting a diving war machine in the Red Sea, to a battleship raid in The Arctic, to a secret tank base in the jungle behind a waterfall, 19XX takes you all around the world. All of this culminates in the main villain, a nameless pilot flying a black fighter jet, shooting two nuclear missiles that must be stopped.

A few new scoring elements have been added. 19XX keeps with the trend of grading your performance, even giving you a letter grade after every battle based on a number of conditions. It also adds medals. There are three sizes of medals, small medium, and large, that are dropped by certain enemies or are revealed from blowing up scenery. Medals increase your score and are sure to give you a higher grade. Unfortunately, despite its quality, 19XX was never ported.