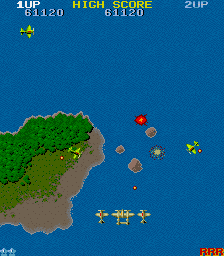 Capcom entered the arcade game market in 1983, with its first shoot-em-up being Vulgus, which had a very typical science fiction theme. Its second shooter, 1942, went for a vaguely more realistic setting, putting you in the role of an Allied World War II fighter pilot fighting in the Pacific Theater. Many have noted over the years how unusual it was that a Japanese company would develop a game where they positioned their grandfathers as the bad guys, but given the burgeoning arcade scene in North America and Europe, decided it was worth it from a commercial standpoint. Indeed it was, and it launched the company’s longest running shooter series.

The naming conventions are slightly confusing, largely because the series does not run in date order. The first is 1942, the direct sequel 1943: The Battle of Midway, with a revision called 1943 Kai. The third game is 1941: Counter Attack, the fourth is 19XX: The War Against Destiny, the fifth is 1944: The Loop Master, and the sixth (and most recent) is 1942: Joint Strike. Compared to other shooters, they’re more grounded in reality, although they quickly delve into sci-fi and fantasy elements as the series goes on, particularly with the ability to control lightning storms and tidal waves in the second installment, plus technological designs far beyond the capabilities of 1940s technology. Government secret weapons are all over the place including lasers, nuclear war machines, tanks and planes the size of buildings, and even alien technology. The series is generally known as either 1942, or 19XX, and is not to be confused with Psikyo’s Strikers 1945, which rips off Capcom’s series wholesale. Most English speaking gamers are only familiar with the first two entries, seeing as 1941 was initially only ported to the SuperGrafx in Japan (although it shows up in various Capcom Classics Collections), and 19XX and 1944 did not receive console releases at all.

In 1942, you control the Super Ace, a plane that looks suspiciously like a Lockheed P-38 Lightning. It’s your mission to fly all the way from the United States to Japan, clear the way of enemy weapons so that the main fleet can get through, and ultimately destroy Tokyo. There are 32 levels in total, with very little variation in scenery beyond the blue expanses of the Pacific Ocean, making it feel rather long and visually repetitive. The goal is to shoot down as many enemies as possibly, which you are graded on at the end of each level.

Every so often, a large group of red-colored enemies will fly in formation and taunt you. If you can shoot down all of these planes, you receive extra points, and either a firepower upgrade or options. The firepower upgrade is pretty weak and hardly essential. The options on the other hand, put two smaller planes that fly next to you and fire when you fire, effectively tripling your firepower. The downside is that they can be destroyed if an enemy shoots, or more likely, rams them.

One feature that is unique to 1942 is a special move called “looping” (not to be confused with the shooter term where beating the game will cause the game to start over at a higher difficulty). You get three loops per stage that are activated by pressing a special button. During a loop, you temporarily become invincible, but you are also unable to attack, making you somewhat vulnerable after your ship returns into play. The upside to looping is that you can use it to temporarily plan your attack and get out of a tight spot at the same time.

Having been published in 1984, obviously the game’s a bit dated compared to its successors. The graphics consist of very small sprites, lots of palette swapped enemies, and the aforementioned repetitive backgrounds. The background music tries to sound like something out of a marching band, but sound technology was not nearly good enough to pull this off. The result is the same squeaky drums being played over 32 long levels. 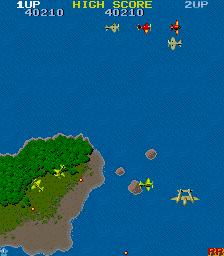 Given its popularity, 1942 was ported to numerous consoles and computers, and most of them are fairly faithful, although they all run in a horizontal 4:3 ratio than the vertical 3:4. The NES port was handled by Micronics, a company that did historically bad arcade to console conversions such as Athena, Ghosts ‘n Goblins, and later Raiden Trad. As with other Micronics games, it’s a bit dicey, plus the music ends up sounding like random morse code beeps. The Gameboy Color port is based on the NES version, except the smaller screen makes it a needless strain on the eyes.

1942 also appeared on the 8-bit Japanese computers, MSX, PC88, and FM-7. The MSX port was by ASCII. It has severely downgraded graphics, including plenty of flickering sprites, but plays well. The PC-88 port actually has more detail in its sprites due to its higher resolution, but has less colors overall.

The game was ported to European computer platforms and published by Elite Systems. The CPC port crunches down the usable space and puts a huge scoreboard that is always visible on the right and takes up a third of the screen. It’s pretty disappointing, especially next to their surprisingly good Spectrum port. The Commodore 64 version has a new opening screen with strange, ominous music. Unfortunately, the controls are a bit jerky, so it’s not as good as the Spectrum and CPC versions.

The definitive home versions, however, are on the PlayStation and Saturn, released as part of the Capcom Generations Volume 1 package, which also included its follow-up 1943, and its pseudo-sequel, 1943 Kai. In Europe, the first four Capcom Generations discs were also compiled and released together. These versions were used for the basis for the Capcom Classics Collection for the Xbox and PlayStation 2, as well as Capcom Classics Collection: Reloaded for the PlayStation Portable. They are essentially arcade perfect, and also include various unlockables like concept art when certain milestones are reached. 1942 is also featured on the Capcom Arcade for the iOS, which is basically an emulation of the original game with absolutely horrible touch controls. 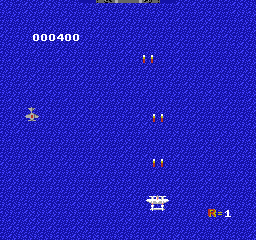 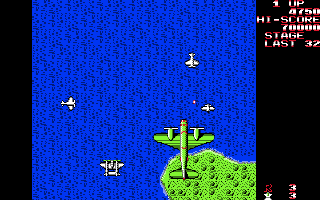 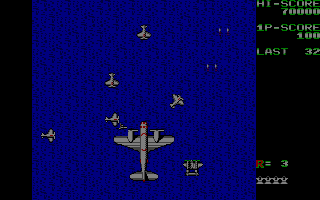 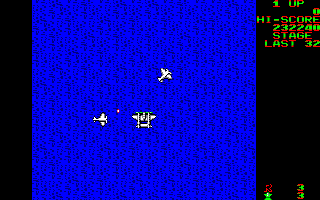 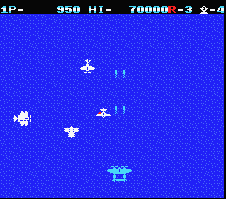 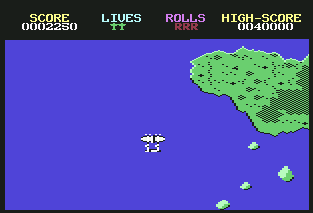 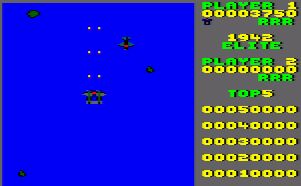 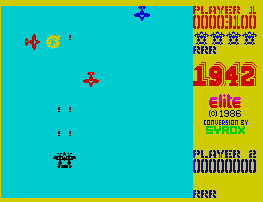