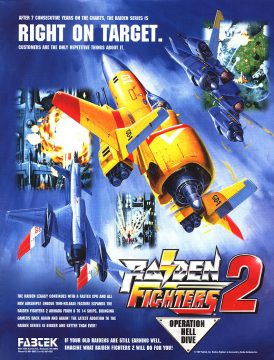 Raiden Fighters 2 essentially follows the formula and format of the first game, but this is in no way a bad thing considering the awesomeness of the first game. Much like Raiden II was to the original Raiden, Raiden Fighters does little to mess with how the first game played, and all changes made are in its favor. The graphics are more or less the same, and the sound design keeps up the trend of pulsing rave music. The somewhat ambiguous method of increasing the point value of medals via Slave ships and other bonuses remains in place, and Miclus and Fairies can be found for those who keep shooting everywhere. With all of these similarities, one may wonder how exactly the game was changed, but there is no need to look further beyond the gargantuan roster of available fighters. 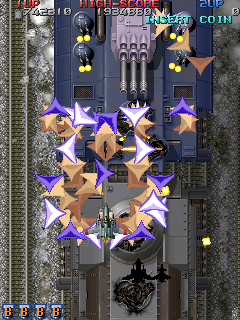 RF2 ups the ante by upping the roster, doubling it from seven fighters (plus one hidden) to fourteen fighters (plus two hidden). The Aegis, Beast Arrow, and Chaser all return with visual and weapon enhancements, now known as the Aegis IV, Beast Wing, and Chaser 2000 respectively. The Aegis IV is the same as the original, but the lasers look different. The Beast Arrow has replaced its straight laser with a kickass flamethrower but retains its homing missiles. The Chaser 2000 has similar missiles but a somewhat different laser, which fires out straight to start but bends and hits several enemies the instant it makes contact with one. The newcomers include the Death Header, the Eraser, the Flying Ray, the Griffin, and the titular Hell Diver, continuing the trend of alphabetical names. The Devastator and Endeavor have vanished, but their weapons have been inherited by some of the new fighters that continue the trend of alphabetic names. For example, the Death Header, a “flying pancake” style ship, has the closing lightning L weapon of the Devastator, as well as missiles that fly out, spin around for a second, and make a beeline for the nearest enemy. The Eraser inherits the straight/spiral laser that the Beast Wing had in the first game and acquires the super-powerful missiles of the Devastator, making it more effective for big enemies than waves of smaller ones. The Flying Ray has the wild lasers of the Endeavor from the first game and semi-homing missiles that fly around in slight arcs and with big smoke. The Griffin has the shot-blocking mines of the Endeavor and these odd energy canisters that fly out for a second before blasting out lasers toward the nearest enemy. The eponymous Hell Diver shoots out smoky missiles that behave like a combination of the Chaser 2000 and the Flying Ray’s missiles, and its L weapon shoots badass energy crescents that fly around in wild arcs and just look really freaking cool. 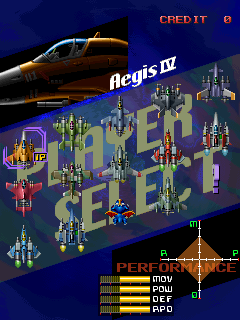 The Raiden Mk-II and Judge Spear return without any changes from the first RF, but two of the new ships, the Raiden Mk-II Beta and the Blue Javelin, are actually their blue player 2 counterparts from their respective games. The Beta’s main weapon causes it to shoot a large spread of bullets exactly like the classic red weapon from the original games. It also uses the classic napalm impact missiles as its sub-weapon and even drops the multi-bomb spread from Raiden II! The Blue Javelin is less quick than the Judge Spear but still pretty fast and also has the spherical bombs of the JS. Its main gun has a bit more spread than the narrow JS gun and also uses the burst missiles from Viper Phase 1, wider in spread than the JS’ napalm missiles.

However, out of all fighters, the coolest is not a machine, but rather a magical being who sticks out from the cast like a blue thumb. It is none other than Miclus, the former Raiden point icon now reincarnated as a surprisingly super-powerful-yet-slow dragon, kinda like a cuter version of Dragon Spirit. It only has a main weapon, a straightforward three-way fire shot which might not seem like much and can’t even be charged. Yet, somehow, it is the absolute strongest weapon in the game and can terminate bosses in relative seconds. Miclus’ “bomb” is a flamethrower, like the Beast Arrow, but it is invincible over the duration of the bomb, can obliterate bosses even faster than the main weapon, and qualifies the dragon as borderline broken! 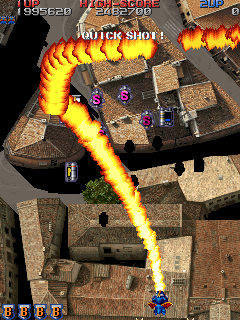 One of the odder fighters available for play is the Aegis II-c, a dull gray version of the Aegis IV that actually appears in one of the stages as an assisting fighter that randomly decides to help you. It essentially functions like the Aegis IV but cannot charge its weapons, so it appears to not be as good unless its main weapon is somehow more powerful. There is also a super-secret ship known as the Dark Sword, which is a black version of the Judge Spear and Blue Javelin. It has the main weapon of the Judge Spear, the sub weapon of the Blue Javelin, and even MORE speed than either of them. It is selectable after all other ships are made available and holding down-right while highlighting the random select icon. Finally, as in the previous game, you can select the Slave ships for each fighter, offering surprising firepower for such a tiny ship. Miclus’ Slave, the Fairy, uses the flamethrower bomb like Miclus instead of the standard starburst as do the other ships.

The stage format is exactly like the first game, only with different landscapes for you to destroy. The first and second levels (a run-down airfield and murky swamplands), as well as the fourth and fifth levels (a beachfront and an aerial armada among clouds) swap places with each other randomly while the third, sixth, and final stages stay in place. The third stage boss is the dubiously named “Violet Head,” a massive armored train that you fight your way up to at what are likely nigh-sonic speeds. The sixth stage boss, “Sand Lobster,” is a mobile desert fortress with more turrets than your average Compile boss. The last stage is a raid on the main enemy base, leading up to Rafflesia, a large multi-turret command console like the last boss of the original Raiden Fighters except it also has the assistance of seemingly infinite tanks. However, nigh-perfect players will be treated to a bonus “surprise” after the ostensible final boss is vanquished. There is a chance you will fly past the wreckage of Rafflesia to duel against Red Eye, the true final boss, a really mean mega-fighter jet. 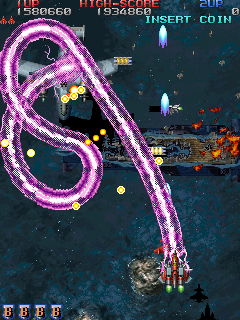 As always, the game is fun for one player but even better with two. Two-player mode even offers a neat addition for well-synchronized players that can coordinate a charge attack right next to each other. This hybrid charge attack makes the two temporarily invincible as they lock together and fire out a massive twin spiraling beam which can potentially destroy bosses in a matter of seconds. It’s a relatively minor addition, but it makes a cooperative game just that much more fun. Available via dipswitches are the addition to unlock the “Expert” mode (where enemies fire off bullets after being destroyed) and the “Special” mode (the obligatory boss rush). Raiden Fighters is a bit easier than the first one (partly due to the overpowered Miclus), but it is no less fun and is still a challenge for any shoot-em-up player fighting for the highest possible score.

There exists a version of the game named Raiden Fighters 2000, but whether or not this is a bootleg or re-release seems to be undetermined. It only seems to have been released in China, with a major notable difference: All fighters are unlocked from the beginning. The definitive version now is the one released on Raiden Fighters Aces, which allows the same customization options as the first game. If you can’t seem to reach Red Eye at the end, go to training mode and tackle it there, or reach it at the very end of the boss rush.