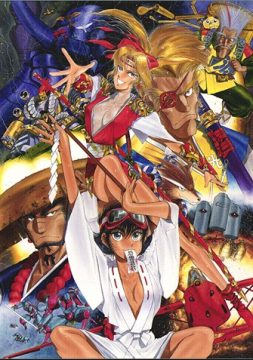 The era just after the chaos the industry barely survived in the mid-80s was a spawning ground for upstart companies who’d have never had a chance in a world controlled by Atari. Publishers sought fresh, new talent and gamers sought fresh, new experiences, and the arcades were a veritable paradise for an entirely new set of genres. From this era arose many of the most prominent developers and publishers of today’s gaming industry, but for every modest upstart company that made it, there were about a dozen that didn’t. One such little company was Video System. One of Video System’s chief programmers was Shin Nakamura, who’d garnered cult fame after creating Rabio Lepus in 1987, an extremely odd shooter starring flying rabbits. Video System itself became quite popular in the early ’90s after the release of their most prized property, Sonic Wings (known as Aero Fighters in the US), also helmed by Nakamura. 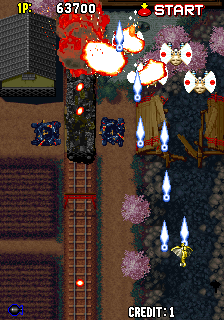 However, for some unknown reason, Video System thought it’d be a good idea to begin developing exclusively for the Neo Geo, a system which, due to the multi-selection and various other factors, didn’t support shoot-em-ups with vertically oriented monitors. Thus, unable to make the kind of games he wanted, Nakamura made the decision to jump ship, take his small team of programmers, and start his own company, which he christened Psikyo (pronouced “Sai-kyo”, which sounds like “strongest” in Japanese). Psikyo would go on to become one of the chief proprietors of commercial tate-shooters the world over, whereas Video System would enjoy only a sparse few minutes of success with its Sonic Wings brand until it would eventually fizzle out sometime in the late ’90s.

Psikyo’s first game was Sengoku Ace, which borrows from Sonic Wings (and in turn passes it on to almost all other Psikyo shooters) the option to play as different characters. You can select from 6 different characters with their own planes that have unique primary, secondary and bomb attacks. This led to some more personality than most space shooters, and also to this: 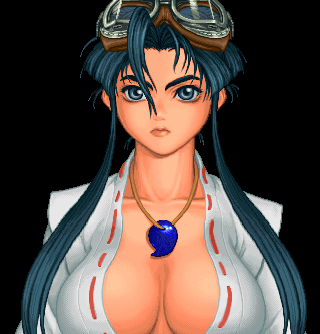 This is Koyori, not technically the main character in any of the games, and yet is ostensibly the most popular. Yes, the Sengoku Ace series ups the boobage quotient much higher than practically any shooter out there, mostly because it’s not a genre where you’d figure that breast size would enter into the equation. Psikyo found a way, though, and God bless them for that. The second and third games, Sengoku Blade and Sengoku Cannon, feature artwork by the (at that time) underground artist Jun Tsukasa. Along with the earlier Sonic Wings, Sengoku Ace and Gunbird helped add a bit of personality to the shooter scene, not only by sticking in identifiable characters, but also creating brief story scenes between stages. 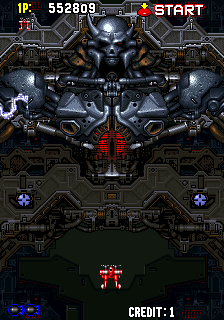 Samurai Aces is Psikyo’s first shooter, and what a debut! Rather than enter the fray with a typical space shooter, Psikyo went off the beaten path with a feudal-esque yet postmodern Japanese setting. While this isn’t exactly original (Compile had already done this with a few of the Aleste games), it’s definitely a refreshing departure from the norm. Aside from the setting, however, Samurai Aces is a pretty standard tate shooter. It’s eerily reminiscent of Nakamura’s previous title Aero Fighters, in both design and visual style (i.e. similar explosions, bomb icons, etc), which makes sense considering that it was developed by the same team of programmers. Almost all of Psikyo’s shooters from here on out would use similar visual styles to Samurai Aces.

A female ninja who flies an odd-winged ship that looks like something out of Da Vinci’s filing cabinet. Fires streams of kunai that get slightly wider with each power up. Her secondary weapons are some typical spreading missiles. Her bomb is probably the best in the game. She ascends closer to the screen and circles around, causing a storm of cherry blossom petals that damage or destroy all enemies.

A monk who flies around on a bird-like plane. His plane has surprising maneuverability considering that as a character, he looks to be the big, slow type. Fires a very dense ray of beams that gets wider with each power up, and a ring of Shinto beads as his secondary weapon. When using his bomb, he fires glowing blue symbols of energy for a few seconds, and these do massive damage.

Somehow manages to fly what looks like a… F15(!) that fires needle-thin spreading beams. His secondary is a giant, spiked dog collar. His bomb causes him to fire large, spreading flame beams for a short duration.

An old man who appears to be some kind of scientist and has a puppet/robot tagging along with him called Ranmaru. He flies a small, agile plane that fires two lasers in rapid succession. His secondary attack consists of lightning bolts that extend upward, hitting everything in a linear path. As Gennai’s plane powers up, the lasers become more powerful and more bolts appear, striking in more directions. For his bomb attack, he calls on giant versions of Ranmaru that bombard the screen, causing explosions.

A one-eyed, blonde samurai looking for his sister Asuka. He flies a small, narrow-nosed fighter that fires a series of very thin energy beams. His secondary weapon is a fairly strong arrow. When using his bomb, he creates a silhouette of his ship made of energy that flies forward and damages anything in its path. It’s fairly strong, but its small area of coverage limits its effectiveness.

A young, tomboyish priestess flying an A-10. Fires cylindrical bolts of energy, while her secondary is a pair of ofuda that fly forward in hawk wind motion. Her bomb is a symbol made of lightning that stays in place for a few seconds and works great against more stationary bosses. 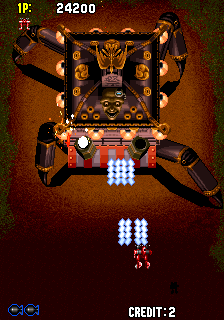 For the most part, Sengoku Ace plays and is structured almost exactly like Sonic Wings. You select your ship and begin blasting through a stage randomly selected from a pool of several, getting powerups and memorizing enemy shot patterns. Fairly standard shmup stuff. The true beauty of Sengoku Ace is in its intense and eclectic pacing, a characteristic of both Sonic Wings and, for the most part, the rest of Psikyo’s shooters. There’ll be times where you’re bombarded with intense bullet-hell tossing enemies for only about a minute before a large boss lumbers into view and then wham, you’re off to the next stage just like that. The game is constantly throwing you around and that makes it pretty hard to get bored.

And then there’s the game’s aesthetic, which is quite possibly what Psikyo shooters are moreso about than their gameplay. Sengoku Ace, especially for a shmup as old as it is, looks really cool. There’s a lot of detail in both the enemies and the scrolling backdrops they emerge from. There’s also a lot more interactivity with the background than in most shmups. You can hit high-reaching rooftops for extra points and destroy parts of the landscape (although it seems that they will suddenly transform and become part of the enemy entourage just as often). The boss designs are really rad looking; Mmost of the enemies are a “Sengoku-meets-mecha” hybrid, with beings from Japanese mythology melded onto gigantic tanks and trains, similar to Compile’s Musha Aleste and Robo Aleste games. Here you fight everything from gigantic versions of the Japanese wind and thunder gods Fuujin and Raijin, or against steam-powered robots wearing shogun masks, or even crazy huge walking Buddha things. You also encounter a team of flying warriors as mid-bosses, usually once per level, each signified with their own color. As you get into the final stages, you need to fight all of them together at once. And apart from technical detail, the game’s stylistic motif, including its music, is charming and ties everything together into a very consistent and overall enjoyable package. In short, you really can’t go wrong with Sengoku Ace. While it stays safely within the confines of the genre conventions of its time, it still manages to be a unique and fun experience. 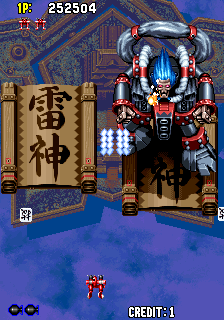 Sengoku Ace was not ported to a home console at the time of its release – perhaps it was too powerful for the 16-bit systems in 1993, and too outdated by the time the 32-bit era rolled around. It was included in the Psikyo Shooting Collection Vol.2 for the PlayStation 2, released by in 2004 by Taito in Japan, and by 505 Game Street in Europe. It’s pretty much a straight port. It includes a tate option, but like most PS2 shooter ports, the visuals are upscaled and interlaced. It was also released standalone on the PC in Korea.