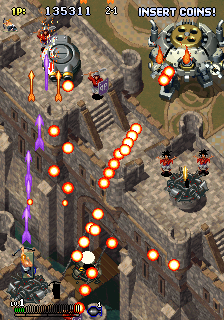 Gunbird 2 takes everything that Gunbird started and cranks it up several notches. It has a much more refined scoring system, modernized gameplay that adds in elements of danmaku, and replaces most of the cast with new characters. The same thing happened with another one of Psikyo’s series, Strikers 1945 when Strikers 1999, the third game in the series, was released. The two games even share a few sprites!

Other things borrowed from Psikyo’s Strikers 1945 series are the more elaborate bosses and the charge shot power bar. Like in Strikers 1945, bosses typically have more than one form and get progressively more powerful as the fight goes. Some of them even have the same attacks as a few of the bosses from the Strikers series, making the games very similar. While their mechanical designs are closely related, GunBird 2 has slightly more cartoonish enemies. 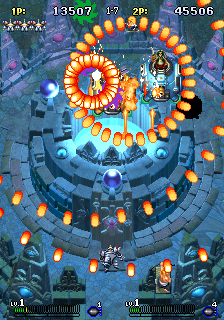 The charge shot power bar can also be used for close range attacks, something completely new to Gunbird 2 and appears nowhere else in any Psikyo game. You press a third button to activate it, and it eats up only one power bar level. These attacks typically do a lot of damage and are great for taking out bosses, but thy have very bad range, making them a little hard to use, but completely worth it when they do hit. Some of these attacks are clearly better than others, though.

In addition to the more refined gameplay, Gunbird 2 has an even more crude sense of humor than the first one. If you’re easily offended, then you might want to skip this one, but if you don’t mind that kind of humor, Gunbird 2 can be pretty hilarious. Aine from Sengoku Ace and Morrigan from Darkstalkers appear as guest characters. Aine seems to have lost his characterization from the Sengoku Ace series, though. Now the once noble samurai keeps bottles in his underwear to keep his butt cool and tells Marion that he wants to make a potion to turn people into homosexuals.

The scoring system has been refined, adding in flashing medals that replace the gold coins. When the medals are brightest, they are worth the most points. You can get extra points by medal chaining, which involves grabbing medals at their brightest many times in a row. It takes a lot of timing and precision to get medal chains right. This medal chaining system would be reused in Strikers 1999. 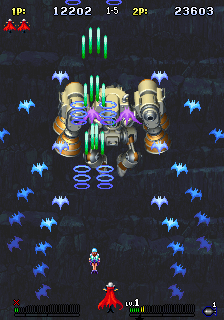 There’s also a new feature called “Nice Bomb!” It’s activated when you use a bomb to clear a bullet that’s hitting your character’s sprite but not its hitbox. Nice Bomb triggers a multiplier that depends on how many bullets you’re grazing. It’s very risky, but can boost your score immensely. You can also score “tech bonuses” by hitting bosses with close range or charge attacks when they show their weak spot. This feature was borrowed from the Strikers 1945 series.

Lastly, every so often, a huge wooden head will come out of nowhere and rain down green gems that are worth a lot of points when you shoot them. The heads can drop a blue gem as they disappear, which is worth more than the green ones. This feature gets reused in Dragon Blaze, Psikyo’s final shooter, but with coins instead of gems. The sprites are identical too, which can be seen as either a fun little easter egg or a mark of laziness. 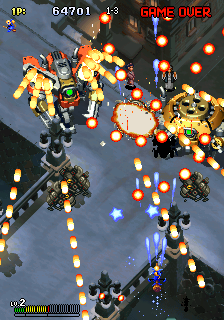 Another fun thing that not very many people notice is a reference to Aero Fighters, a game series made by Video System. Near the end of Gunbird 2, you fight a large, dark colored eye in a temple. Aero Fighters 2 had Lar, the gigantic eye that was a possible final boss that was fought in a temple. It’s a fun little shout out that adds a bit to the game’s personality.

While Gunbird 2 has a fairly simple scoring system compared to other shooters from other games at the time, it makes up for it by being Psikyo’s hardest game. It’s not actually bullet hell, as many of the bullets come out pretty fast, though not as fast as the first Gunbird, and the shots are aimed. There are some thick bullet patterns, but they aren’t as elaborate as the ones seen in games by Cave or Shanghai Alice. It’s a pretty daunting challenge, but a lot of the cheapness of the first game has been eliminated with the relatively slower bullet speed, giving bosses weak spots, and generally more powerful playable characters. It’s a very solid game all around, and quite possibly Psikyo’s best.

Gunbird 2 was ported to home consoles, thankfully with XS having nothing to do with them. Capcom published the Dreamcast port of Gunbird 2, adding in Morrigan as an exclusive character that does not appear in any other version. In addition to a tate (“Arcade”) mode, there are two “Original” modes that will either keep the view static, or move up and down. There were also further Capcom/Psikyo crossovers. Psikyo produced Cannon Spike, an overhead shooter starring many of Capcom’s classic characters such as Cammy, Mega Man, and Arthur. There was also a Capcom vs. Psikyo game, but it was produced and released in Japan, only on the Dreamcast, and it is not what you would expect. Instead of a fighting game, it’s a mahjong game, featuring Capcom and Psikyo characters playing mahjong against each other. Psikyo did produce a pornographic mahjong series called Taisen Hot Gimmick, though Taisen Net Gimmick Capcom and Psikyo All Stars was for the most part clean. 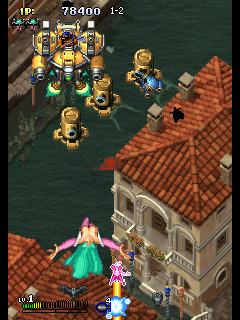 The PS2 port, as mentioned before, includes both Gunbird games. Again, it has slightly wonky sound and it’s missing a low res display mode, plus since it’s based on the arcade version (and not published by Capcom), it’s missing Morrigan. There are also slight loading times before boss encounters. There was also going to be a PSP port called Gunbird 2 Remix. Unfortunately, it was cancelled, though some screenshots and footage exist of what the game could have looked like.