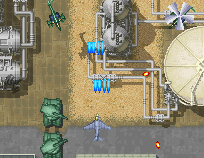 Genres rise and fall in popularity. Whenever a huge breakout hit emerges and the me-toos swarm in, the limited store shelf and arcade floor space causes many losses and forgotten titles in their wake. Even from a major company like Namco can pop out a game that fizzles without even a port onto one of its multitude of museum collections. Fighter & Attacker is another soldier lost in the kerfuffle, hit with the worst of ailments within the war of arcade dominance: brutal tepidness. 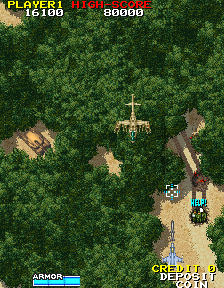 The gameplay is similar to Namco’s own classic Xevious. The screen scrolls vertically with air and ground targets to blast. However, F/A did take pages from other popular vertical shoot-em-ups of the era, particularly Raiden‘s bonus system. Hidden within buildings, tanks, and enemy ships and jets are POWs to save, be they diplomats or GIs. Collecting them and making it to the end of each of the 8 stages unscathed nets the player or players large bonus points. Set over the skies of an Middle Eastern conflict, the setting and theme is a lot more down-to-earth with its Gulf War-era current-day setting. The campaign even plays out as one continuous stretch of ground to cover within a 24 hour period, complete with a transition to night and back to day. The only break of the near-seamless shift from level-to-level is the jump to aerial-only dogfights on two of the stages, negating the use of any ground attacks.

Fighter & Attacker‘s major twist is the large selection of planes to pilot. All of the 16 aircraft jets are based on real models outfitted with various strengths and weaknesses. There’s the balanced and game’s namesake American F/A-18E Hornet, the speedy British Harrier GR.5 variant, the missile-packed Swedish JA-37 “Viggen” interceptor, and the slow-but-punchy “Stealth Bomber” F-117 Nighthawk, to name a few. Each plane is equipped with their personal set of fire methods and air-to-ground blasts, with many unable to rapid-fire. Thus, you have to weigh whether you want to have the wide spread spray of an F-14D “Tomcat” or the narrower-but-faster gunning of an Dassault Rafale. As an added strategy, there’s 3 kinds of ground attacks assigned to the ships: a standard bomb deploy, a lock-on missile strike, or a short-range Vulcan/Gatling cannon; naturally the power and speed behind each type is further varied among the classes of ships given. 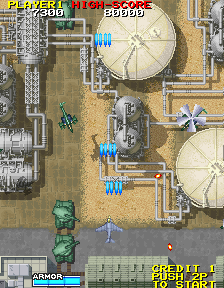 The plot is basic and flimsy, but that’s typical of the genre. The assignment is to topple an evil dictator along with a few key targets that serve as bosses. Through the string of levels, the player will fly over deserts, jungles, rugged mountains, harbors, and sun-bleached cities to reach bases and a legion of planes and tanks aimed at gunning you down. Aside from rescuing prisoners, the only real task is to destroy the bosses at the end of each level: a battleship, an aircraft carrier, and various cargo planes and armored bases, as well as the dictator’s stunningly purple helicopter. Or you can take the pacifist way and bypass shooting the targets at the cost of score. Much like Gradius, it is possible to reach the final boss without blowing up one ship, if you’re willing to take that grueling added challenge.

The road to blasting the dictator to dust is as difficult as sending one or two planes to battle a fleet would truly be. There are no lives or extra ships given the player. Instead, planes have an armor that can withstand 3 hits (on default) before being blown out of the sky. Earning enough points will refill a lost bar of an aircraft’s health. However, the tens of thousands of points necessary to repair damage is overshadowed by the bombardment of enemy fire coupled with each plane’s brief mercy invincibility from each hit taken. Lose your armor? Then it’s game over. Adding to the “realism” is the lack of any powerups. Your only source of offense to work with is the weaponry given to each plane at default. The fact alone that there isn’t even the genre’s stock screen-clearing bomb (outside of continuing from a downed life) should be a sign of how ruthless and unforgiving the game is on your survival. Adding insult is the relative weakness of your air firepower to threats blitzing the player later in the game, with many intercepting planes better armored than you. The better alternative is to play more defensively to dodge the curtain of orange-yellowy death with the peppering of air and ground button-pressing to immediate danger. 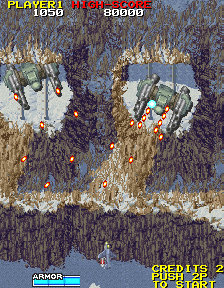 Graphically, Fighter & Attacker suffers. It’s not that it’s bad, but it feels two years behind the pedigree of its contemporaries. A few stand-out rock cliffs and intricate bases are padded with bland sand, sea, and asphalt backdrops. Worse yet, the lack of stark outlines of your ships can lead to losing them in the texture of the level, leading to cheap hits. A few touches like tank tread marks and destructible buildings don’t make up the flashier, more colorful titles from the competition. The less serious and more forgiving Aero Fighters of the same year serviced as the better military vertical shoot-em-up experience overall for the arcade public.

As consolation, F/A does have a soundtrack that proved far more recognized and remembered than the game itself. Composed by the Sampling Masters of Shinji Hosoe and Takayuki Aihara, the music of the game is chock-full of hardcore techno and rave that the duo would be known for better in the like of Ridge Racer along with various album sets of their J-death techno tunes of the same vein. Even the female voiceover follows the dancehall theme with each coin chiming a “Get Down Everybody!”. The Sampling Masters’ own Sweeprecords has rearrangements and nonstop mixes of the score available, which are far more easily available now than the game itself.

As for Fighter & Attacker, Namco never saw to port or make it available anywhere else beyond its NA-1 board. It is a servicable title, but beyond its hardcore music and high level of difficulty, there’s little hook grabbing players outside of shooter enthusiasts. The no-frills militant visuals lacks a fantastical and inviting thrill, leaving this fighter stuck on the runway. Namco has only made a couple of cameos for F/A: placing the logo on the stock red Hornet car in the first Ridge Racer and having the third round song “RAVE WAR” (coincidentally a working title for the Tekken series) in the Taiko no Tatsujin rhythm game series.