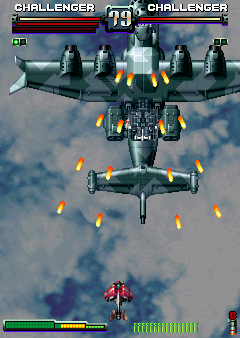 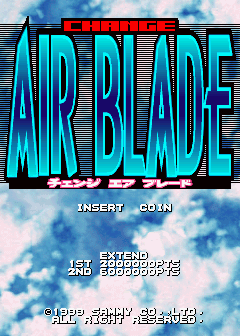 Ah, the shoot-em-up. A genre that has existed in some form since Space Invaders and Galaxian. Through the course of its history, it’s evolved into games all about exploding the crap out of everything, like, say, Raptor. Other games, such as DoDonPachi, are more focused on skill and tight reflexes. Out of the many, many different kinds of shoot-em-ups, however, one has always been neglected: the competitive shoot-em-up. Most shoot-em-ups offer a two player mode where you and another player work together to clear the game. On the other hand, how many do you see about going against another player? Sure, there was Twinkle Star Sprites, a game so cute and colorful it could just about give you diabetes. The goal was to defeat the other player, yes, but you never directly attacked them. So, Sammy decided to take this concept and make it a more direct. A bit manlier. Unlike Twinkle Star Sprites, where you took control of several brightly colored anime characters, here you’ve got fighter planes and jets more along the lines of something like Raiden.

When you start the game, you’re given the choice of eight different ship types. The one you pick will determine your shot type, what happens when you use a bomb, and your “boss” form, which will be covered later. Aside from that, you can increase the speed of a ship at the cost of its power by hitting the “bomb” button on the character select screen, or you can do it the other way around with the “option” button. Which ship is the best is really a matter of personal preference, although some are more suited for boss killing, while others are… well, hang on, we’ll get there.

When you actually start a match, it looks like a cross between your average shoot-em-up and a fighting game. One player stays on the bottom half of the screen, the other hangs at the top, facing towards the player on the bottom. Your objective, basically, is to shoot down your opponent before he can do the same to you. It’s a three button setup, with the shoot, bomb, and option buttons. You can either rapidly tap the shoot button, or you can hold it down to get a more powerful shot at the cost of your speed. Bombs work the same way you’d expect, by blowing up everything on the screen. You start off with one at the beginning of each round. Hitting your opponent will also drop bombs and other powerups. Bombs go towards a small meter that gives you an extra bomb each time you fill it. While bombs will clear away bullets, they do take about a full second to activate, so you can’t always rely on them to save you. It’s also possible to try using a bomb if your meter isn’t entirely full, although the less of the meter is full, the less of an effect it’ll have. 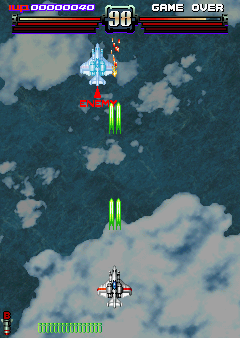 Aside from bombs, you can also collect options, which are basically special attacks. Each ship gets three, one for the different color of option powerup you pick up. The bottom player uses these as direct attacks, some coming out instantly, while some take a few seconds to lock onto your opponent. However, options are generally harder to dodge than your standard shot, so they’re worth using as you pick them up. The top player’s options are a mix of direct attacks, as well as being able to summon enemy ships onto the screen to give the bottom player problems. You’ll also want to get the pickups that power up your standard shot. What you really want to try to go for, though, is a powerup that will make you and your opponent switch sides. You’re going to want to grab these because the player on the top side on the screen is generally at an advantage for several reasons.

For one thing, power increasing pickups will make the bottom player’s shots faster and do more damage. If you’re on top, however, any powerups to your firepower won’t affect your shooting, but will instead make it so you fire out small bullets instead, which will instantly take away a whole third of the bottom player’s health if they connect. The top player, instead of getting a bomb meter, also gets a three level super meter that wouldn’t look out of place in Street Fighter Alpha. The meter charges up automatically, and the top player can hit the bomb button at any time to empty their meter. What happens when you do this depends on how full the meter is. Using it at Level 1 will attack the player on the bottom with a lethal bullet pattern, Level 2 will give a different, harder to dodge attack, and Level 3 is where things start to really get fun.

Hitting the bomb button at Level 3 will call in a much bigger “boss” ship to dock with your ship. Each ship has its own “boss” form, with its own attacks. Once you’re the boss, each of the three buttons attack the player on the bottom with a different kind of bullet pattern. If you’re unlucky enough to be on the bottom side of the screen when this happens, the best you can do is hammer the boss as hard as you can until you can destroy it. Destroying the boss won’t kill the other player, but it will leave their super meter drained until they can get it charged again. As you’d expect, the bosses are pretty difficult to fight, with how fast their bullets move, so if somebody manages to get boss form, you’re probably going to be in some serious trouble. It’s not all bad, though, since bosses in this game tend to take much more damage than your typical shoot-em-up, and the bottom player can blow away parts of the boss to reduce the effectiveness of their attacks.

Rounds are won by emptying the other player’s health, like most other fighting games. Each player gets three bars of health at the start of each round, each representing one “life”. The player on the top side of the screen is generally more dangerous, because not only can he still use his standard shot type, which will do some damage, he can also fire special bullets which take away a whole bar if they hit. As the bottom player, you have to fight your opponent just like a regular shoot-em-up, dodging their attacks while slowly wearing away at their health bar. Once a player loses all three of their bars, they explode completely, and the round ends. Once the next round stars, the top and bottom player switch places.

It gets pretty intense, and it’s possible, if both players have the skill, for matches to go on for a long while. It’s not uncommon to see players switch places and reach boss form several times, slowly wearing each other down until somebody gets some lucky hits in. It does generally feel a little unbalanced towards the bottom player. Since you get to switch sides every round, however, it feels broken for BOTH players. And if everybody’s broken, that means nobody’s broken. Technically. 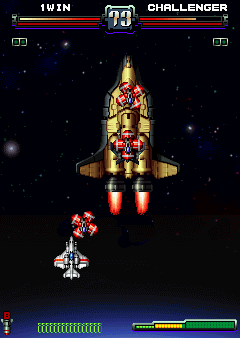 This is how it all works out if you’re playing the two player mode, but single player is more like a boss rush. You fight all eight ships in a row, and if you lose all three bars of your health, not only do you have to insert another credit, the opponent gets all their health back. Not only that, but at no point in single player can you ever take the top side of the screen, ever. So that means no getting to be the boss. What makes this worse is that the AI players don’t even have a super meter, meaning they can fire open you and call upon their boss machines as much as they want. The first few AI opponents don’t abuse this ability too badly, but as you go further on, the game starts to reach SNK levels of assery. Without the whole “play as the bosses” gimmick, the single player mode just feels rather cut rate.

Compared to most similar games released in 1999, Change Air Blade is kind of bland looking. All the ships look decent enough, and each of them have their own background while you fight them, like forests, deserts, and airbases. There’s pretty much no real detail to them, however. The most exciting element of the graphics would be the bosses, which tend to be big military machines. They come in forms like copters, planes, rocketships, and what can only be described as a floating tank. Each machine is usually made up of multiple parts, which can be blown up separately. Another nice touch is that each boss form also has their own background, like how the rocketship has an outer space backdrop behind it. The music’s not really anything of note, though. While each ship has its own theme song, all the boss forms share the same music, which gets a little old, quickly.

Sadly, after its release, Change Air Blade was more or less dead on arrival, and there hasn’t been anything like it since. It never left Japan, so most of the text is in Japanese. Thankfully, you won’t need to know any of it to actually play. It never received any kind of home port, either. Still, if you enjoy shoot-em-ups, and you want to try something a little different, it’s definitely worth your time. Just be sure to bring a friend to save yourself some major frustration.