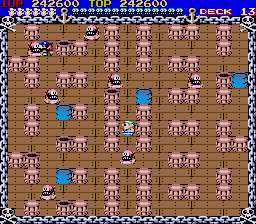 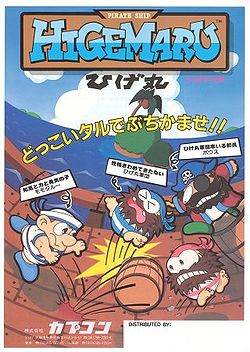 In 1984, a then little-known gaming company by the name of Capcom entered the video game industry. Back then, the company only had two game designers: Tokuro Fujiwara (a.k.a. “Professor F” or “Arthur”) and Yoshiki Okamoto. Both men had previously worked for Konami. During that same year, the company released four games: Vulgus, Son Son, 1942, and a Japan-only action/puzzle game called Pirate Ship Higemaru, which was designed by Fujiwara. Higemaru is Japanese for “Round Beard”. This game utilized the Z80 hardware, the company’s very first video arcade system. 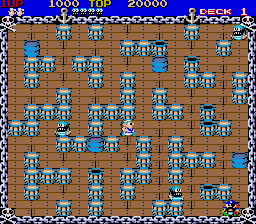 Higemaru also has the distinction of being the first Capcom game to spawn a sequel, which was released on the Famicom and MSX2. Both games are enjoyable in their own way, the former being an overhead-view puzzle game with a pirate element to it, and the latter taking that same basic concept, and expanding on it greatly to form an incredibly fun action/adventure game.

The first Higemaru game was released in September 1984. In this game, players take control of a Japanese sailor named Momotaro. The game begins with a lesson that teaches players how to play game. Afterwards, the actual game begins. Each stage is called a “deck”, and on that deck are barrels, and two types enemies that will try to stop Momotaro: Higemarus (which are generic small pirates), and Bous, a Pirate leader. They will try to hide from (and hit) Momotaro, killing him off with just one hit, and it is up to him to pick up the barrels, or heavy bags, and heave them at their enemies. You can also collect anchors, which will give you temporary invisibility, and items that will help raise your score. One of them is the famous yashichi symbol, which has appeared in a countless number of Capcom games since Vulgus. After all the enemies have been knocked off the ship within the time limit, you can then advance to the next “deck”. The premise of this game, in some ways, is reminiscent of Sega’s Pengo, except that game featured a Penguin throwing ice blocks at his enemies.

The protagonist, it is up to him to defeat the band of pirates, and in the process, reclaim stolen treasure. Momotaro is a young, child-like Japanese sailor who must use barrels to defeat the endless army of pirates who will stop at nothing to put an end to his efforts. Momotaro reprises his role in the game’s sequel Higemaru Makaijima: Nanatsu no Shima Daibouken.

Small, round bearded Pirates, who serve their leader Bous. They are the first set of enemies that Momotaro has to face. Also appeared in the sequel, but in later levels, and only in the pirate ship portions.

Small Pirate leaders, who are also the only enemies that Momotaro must face in the “Hi-Point levels”. Also appeared in the sequel, but as one of the final bosses. 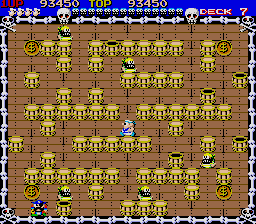 Every 4th “deck” is a special “Hi-Point Stage”. During these levels, only the Bous enemies are the ones the player has to deal with, and it is up to the player to attack them all. Not only do the Bous provide more points than the regular Higemaru pirates, but also available on the “Hi-Point Stages” are three hidden items. The game has a total of 16 different decks. After the 16th, the game starts all over again.

The music for this game isn’t much to write home about, as there are only a few tracks (including the main level theme, and the “Hi-Point” level theme), but is pretty well done for the time. The soundtrack was among the first to be composed by Tamayo Kawamoto, who’s other BGM works for Capcom include the arcade versions of Legendary Soldiers, Commando, and Section Z. She now works for Taito, as a member of Zuntata, a popular (in Japan, at least) band. Graphics are pretty well detailed and animated, especially whenever Momotaro throws the barrels and bags at his enemies. The only downside to the gameplay is that because you can only move in four directions, the controls can sometimes be a bit stiff, because when turning away from an enemy that is about to hit you, or with a barrel, you might not have enough time to react, and could lose a life immediately.

The original Higemaru resurfaced, fourteen years after its original release, on the 3rd volume of Capcom Generations for both the Sony PlayStation and the Sega Saturn, which was subtitled as Dai-san-shū Koko ni Rekishi Hajimaru (it roughly translates into History Begins Here). Also featured in it were three of the company’s other earliest titles in Vulgus, Son Son, and Exed Exes. Other than emulation, the game was never officially released outside of Japan, until 2005, when it was included as part of Capcom Classics Collection Vol. 1 for the PlayStation 2 and Xbox. It was also part of Capcom Classics Collection: Reloaded for the PlayStation Portable. Years later, Capcom would release Pirate Ship Higemaru with other Capcom arcade classics for Xbox Live Arcade and PlayStation Network.