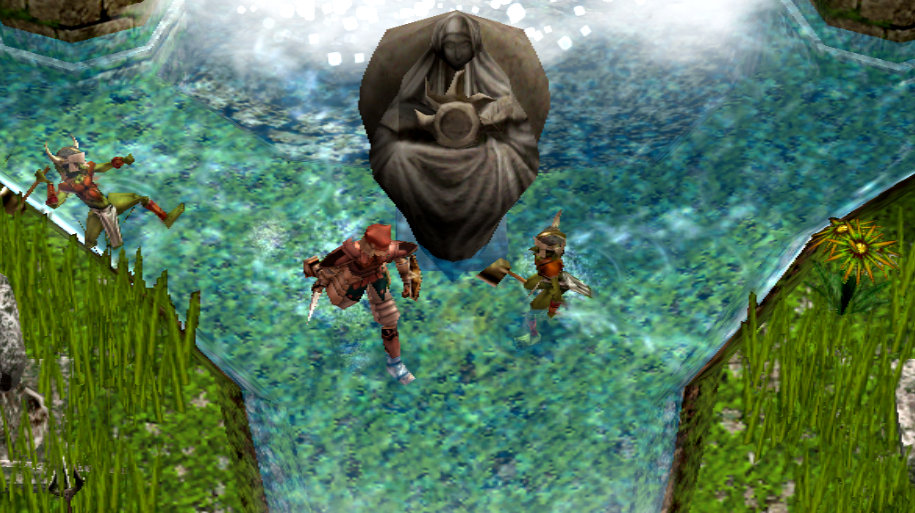 Xanadu Next is a tribute to Falcom’s classic RPG roots, released in 2005 for Windows to commemorate the 20th anniversary of the original Xanadu. As expected of the various Dragon Slayer games, it doesn’t play much like the older titles, but instead it takes some of the basic concepts of 80s RPGs and remolds them in a modern content. It takes the basic gameplay of Diablo, combines it with the action of Ys, injects some Zelda-style puzzle solving, and places it in an interconnected world. The result is an absolutely outstanding hack and slasher. 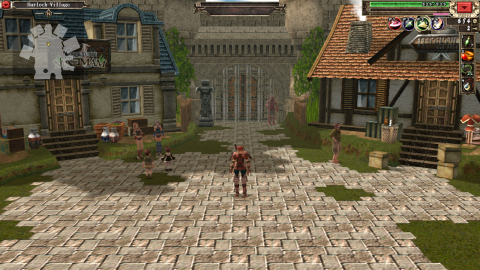 The game begins with two characters setting off on an adventure to explore the mysterious Harlech Island, which is home to a phantom castle Strangerock. One is you, the player character, a knight who has lost his purpose after the end of a war. The other is a young woman, a scholar, who grew up in the same orphanage with the player, and has drafted his protection services. After settling into town, you set off to explore the local dungeon, only to get killed almost immediately by a mysterious swordsman. For reasons that aren’t immediately clear, you are able to be resurrected through the powers of spirits known as Guardians. However, the effects won’t last long, and unless you find a more permanent solution, you’ll find yourself dead again. With more power and renewed purpose, you delve further into the ruins of the island, rummaging through the artifacts of the lost kingdom of Xanadu, in hopes to find the legendary Dragonslayer sword.

Since Xanadu Next is focused on dungeon exploration, there’s little in the way of plot or exposition, outside of the initial setup, with only occasional cutscenes that occur at key moments. Outside of a few townsfolk and fellow adventurers, the only other primary character is Charlotte the girl who accompanied you to the island. She mostly just stays at the inn, making lunchboxes for the hero and occasionally translating stone tablets that reveal bits of history about Xanadu. 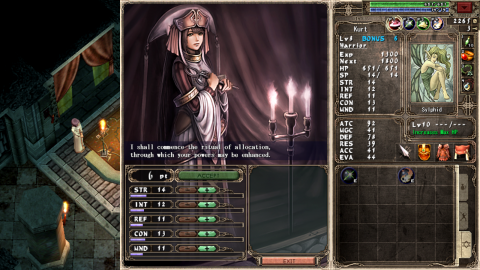 The game was initially designed to be controlled with a mouse, (although it functions with a controller, though navigating the interface is a pain). You can hold down the left mouse button and your character walks in the direction the cursor is pointing to. You attack enemies by clicking the left mouse on them, while right clicking will activate the currently chosen spell or skill. Unlike Diablo, there’s no shared MP pool, as each skill can only be used a limited amount of time. Restoratives are extremely rare, and otherwise they only recharge at save points. However, if one skill is exhausted, you can always just equip another. There’s a lot more to the game than just “click, click, click”, because you really need to watch your opponent’s attack patterns to dodge them, and try to get behind them to score some critical hits. There are a handful of boss fights, which are similar to Ys VI and Ys: Oath in Felghana, though you lack the ability to jump, and sometimes targeting its various parts can be troublesome. Despite feeling a bit odd, it works very well once you get used to it. There are occasional box puzzles, requiring that you push them around or destroy them so you can walk on them, though they aren’t particularly annoying or difficult.

There’s only a single town in the game, which you’ll need to return to quite often in order to buy new equipment, items, and keys, as well as heal and save the game. (Save points are otherwise fairly rare, mostly just showing up before boss encounters.) Much of the early game is spent making keys, or buying and replenishing your supply, which you need to unlock the (many) doors in the opening dungeons. Amusingly, they are “skeleton” keys, which are made from the bones you’ll occasionally find.) There is an item that lets you immediately teleport back to town, but it’s a one-way trip. (There are items that create a temporary portal back and forth, but you need to purchase them and they expire after a single use.) Thankfully, the whole world is connected together, which open up new paths to previous sections as you go through the game. Though initially the only real area to explore is the ruins outside of town, eventually you open up sewers and activate the lift to the nearby mountain, so you can easily double back to town. Later areas also open up warp portals. You can also revisit old areas with new skills in order to get some extra treasure. This creates a much more believable world, far more cohesive than the usual never-ending dungeons often seen in games like this. The initial Japanese release is a little sparse, though a later patch (found on Falcom’s website), adds a bonus dungeon (which is really more tedious than anything), new monsters and rare items, and changes the level cap from 20 to 30. This is already included in later retail releases and in the English releases. 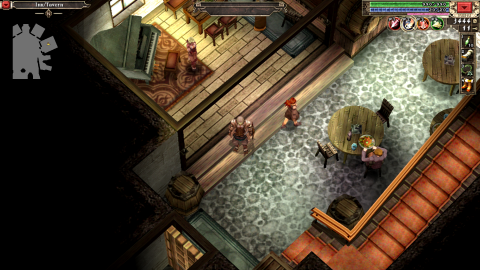 As to be expected, there is a bit of grinding in order to gain levels and afford new weapons, but it doesn’t overwhelm the experience. Gaining just a single level can make a huge amount of difference in the kinds of enemies you can successfully fight, especially since the level cap is pretty low. You can allocate points to different attributes each time you level up, which also determines the kind of equipment you can wield. Each weapon also has unique skill attached to it, which you eventually learn once you use it enough. You keep this skill even if you ditch the weapon, which gives you an incentive to use them all, even if they’re weaker, just to obtain these. Helmets are also important, since they determine elemental defenses. You can also equip a special Guardian card, which level up on their own and enhance other attributes, but you can only have one of these at a time. You need to return to the church in town in order to level up your stats or change your Guardian cards. You can also level down and redistribute your stats, if you find that your build isn’t working out. In general the game isn’t too difficult, as long as you’re properly prepared, though there is one particularly troublesome type of enemy that can reduce your experience level. If you get killed, you can opt to reload your last save, or return to the last save point with all of your experience and items but half your gold.

Graphically, Xanadu Next isn’t amazingly high tech, but still looks decent. The game is entirely in 3D, with the ability to rotate the camera in dungeons. Your character model changes with your equipment too. Compared to the Ys series, it lacks the colorful anime-style characters, and goes for a style closer to Western RPGs, similar to other early Japanese PC RPGs. The music, as usual, is lovely. It’s a bit different from Falcom’s usual fast paced synth rock style, but nearly all of songs are shining examples of how to create atmospheric music, while still possessing a strong melody. 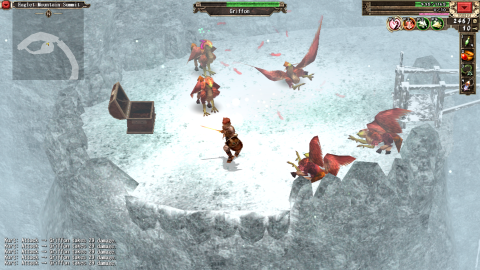 There are a number of references to past Dragon Slayer games, though Yoshio Kiya had long left Falcom by this point, and he had nothing to do with this game’s developments. Beyond references to the kingdom of Xanadu, one of the main quests involves finding the Dragonslayer sword, and each of the bosses gives a crown upon beating them. There are several songs featuring arrangements of the main theme from the original Xanadu, which is one of the few links between the two games. One of the first Guardians you get is a Sorcerian card. 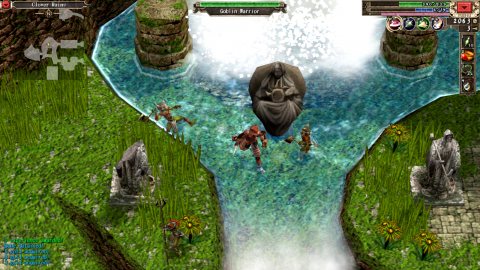 Xanadu Next is one of the best titles published by Falcom. It obviously feels like the later Ys games, but its emphasis on equipment, skills, and dungeon crawling, as well as its aesthetics, give it a distinct feeling. The cohesive world design not only makes the island feel like an actual place but also ensures that navigation between areas is expedient. In many ways, it’s similar to From Software’s Souls series, its emphasis on combat and level design, though it predated Demon’s Soul by a few years, and it’s not nearly as difficult. It takes the best aspects of classic RPGs – exploring dungeons, rummaging for equipment, building characters – while reducing its frustrations and adding in a challenging, satisfying combat system. It’s well paced, and not too long either, with completion probably taking between ten and fifteen hours. It’s a great alternative for players who enjoy the hack-and-slash action of Diablo but don’t like its repetitive, randomly generated levels, and is highly recommended for RPG gamers everywhere.

Xanadu Next remained in Japan for many years, and it wasn’t ported to any major consoles, making it a PC exclusive. For a number of years, an English fan translation was available so it was playable for non-Japanese gamers. It wasn’t until 2016, over a decade after its original release, that it was officially released in English through digital distribution services like Steam and GOG, courtesy of XSeed. This version also modernizes the game a bit by adding in support for widescreen resolutions. However, its graphics programming is still clumsy, and there’s a noticeable amount of stuttering regardless of the power of your hardware. Unfortunately, in spite of the game’s high quality, it didn’t sell particularly well, probably due to the difficulty of selling an old game to a modern audience, especially without name recognition outside of Falcom’s small fanbase. It doesn’t help that the game looked a little dated when it was released, much less ten years later. 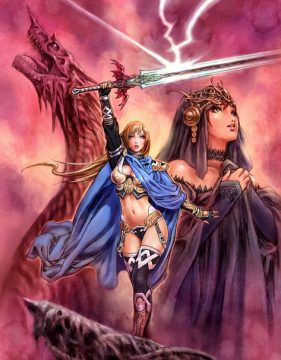 Falcom also hired famed illustrator Shunya Yamashita to provide some promotional artwork, including the cover. The gorgeous woman featured in these drawings are a huge misrepresentation of Xanadu Next, as the bikini-clad warriors are nowhere to be found, though this is at least consistent with the MSX Xanadu cover art from the anime having nothing to do with the game either. 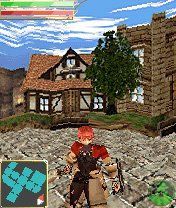 Strangely, Xanadu Next was ported to Nokia’s failed N-Gage system by a company called Script Arts, who also ported several other Falcom games to mobile phones. On the upside, the game was released in America and Europe, and is available in English. On the downside, it’s pretty bad. The whole package is pretty similar to its bigger brother, but drastically scaled back. Most of the storyline has been hacked out, along with what few characters were there to begin with. Instead of questing to save your life, you’re simply off to find the mayor’s kidnapped daughter. Many of the areas are similar, but are much, much smaller. The controls are pretty messy with the directional pad, to the point where it’s almost impossible to hit anything with a projectile spell, and there’s no camera control, which makes navigation pretty confusing. Only a few songs from the original game have made it here as well. 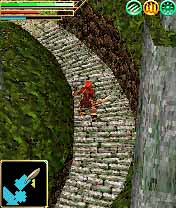 But the biggest problem is the same one facing practically every 3D N-Gage game – it runs terribly. There’s rarely a time that it doesn’t feel like it’s running in slow motion, which drastically reduces a lot of the appeal the game originally had. And since you’re often running back and forth between town, building levels and healing yourself, it gets pretty tedious, pretty quickly. And that’s not even factoring in the numerous loading screens. It’s also quite difficult – if you die in the N-Gage version, it simply forces you to reload your save. While it was nice to see a Falcom game released outside of Japan back when this game was new, it was definitely the wrong platform for it.