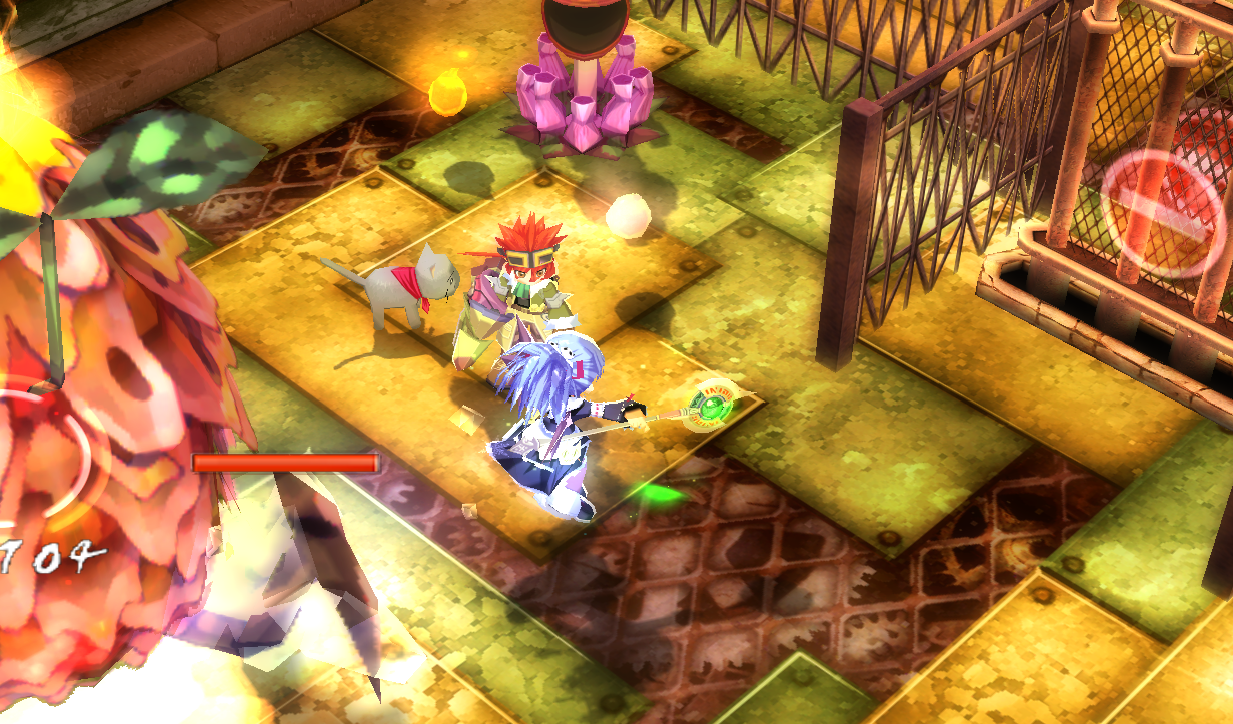 Zwei II (also known as Zwei: The Ilvard Insurrection for its English release) was released seven years after the original, though it still maintains much of the same spirit. The story here takes place on a different part of Granfallen, initially focusing on treasure hunter Ragna Valentine, who jets between the continents on his customized biplane. Unfortunately, a chance encounter with a mysterious cat creature sends him flaming out onto the continent of Ilvard. 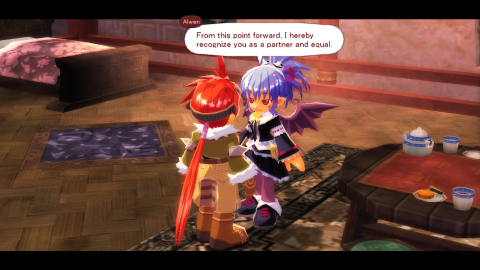 Though his plane is ruined, he (very luckily) manages to survive the crash through the intervention of Alwen du Moonbria, a vampire princess. Having been stripped of most of her magic, she is also looking for her missing castle, and Ragna’s near death experience allows to her to make a “Blood Knight” (i.e. servant) out of him. After some initial squabbling, the two find each other on amiable terms, and set out to find Alwen’s sealed magic…which of course leads to both her castle, and the dastardly foes that attacked Ragna in the first place. 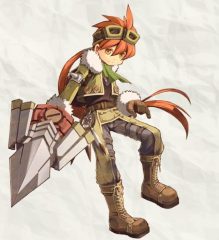 An adventurer from another continent, he’s extremely proud of his airplane, which is unfortunately ruined in the opening moments of the game. He uses a weapon called an Anchor Gear, which is sort of a combination between a sword and a whip, which can also be used to break or move objects. 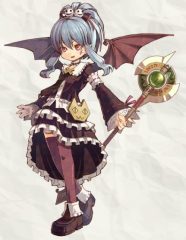 The head of the Moonbria vampire clan, though since her father’s death, she’s mostly just hung around in her castle…at least, until she was tossed out. She’s a magic user, though at the beginning she’s lost most of her powers, so you’ll need to regain them over the course of the game. 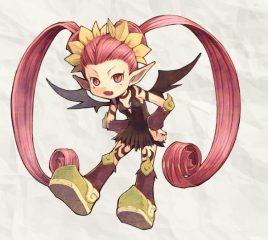 Alwen’s familiar, a dark fairy who grows jealous of her bond with Ragna. 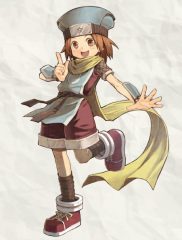 A ninja from a faraway land who begins to hunt Ragna and Alwen from the shadows. Briefly becomes a playable character when the two are separated from one another. 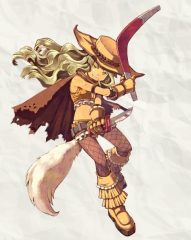 A boomerang-wielding cowgirl, Odessa is a treasure hunter who just happens to get caught up in Ragna and Alwen’s adventure. Like Subaru, she is also a playable character at times when the main duo is broken up. 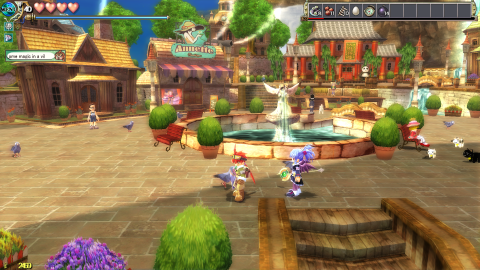 The fundamental gameplay is similar to the original Zwei!!, with a major change: the shift to 3D. One can’t help but miss the beautiful graphics of the original game (though the SVGA graphics seemed quaint in the more modern 4K era of gaming), but Zwei II makes the transition fairly well. The visual style is an evolution of Gurumin (itself sort of a spiritual successor to Zwei), using cel shading that gives a simple and clean anime look to the characters. The game does make the mistake of beginning the game in some boring looking mines, but later levels, particularly the Caiphas Woods, bring back the brightly colored landscapes that set it apart from a typical dungeon crawler.

The move to 3D also changes the default view to an isometric perspective, though it still feels a little too zoomed in and claustrophobic. The action is smoother and tighter than the original, fixing one of its biggest issues, as it feels a little more like a modern Ys title. The special attacks are assigned to their own button and work slightly differently – you get one stock every time you reach 50 hits on the combo meter, which can then be activated at any time. (Your stock is limited by your number of hearts, so you get one per 10 HP.) And instead of gaining power with higher combos, it simply changes based on the type of magic Alwen has equipped. You can also jump, too, giving some platforming segments to some of the dungeon and making it feel a little less repetitive. Most of the dungeon floors also have optional treasure chests, often with a small puzzle that needs to be solved before they can be obtained. There are also a few segments where your partners are swapped out for Subaru or Odessa, giving a little bit more variety. All of that being said, the level designs are still fairly simple, and the combat is still quite straightforward – it really could’ve used a dodge or some kind of defensive maneuver to give it some depth. The boss fights can be a pain too, due to the automatic camera movement that doesn’t always quite frame the action in the best way. 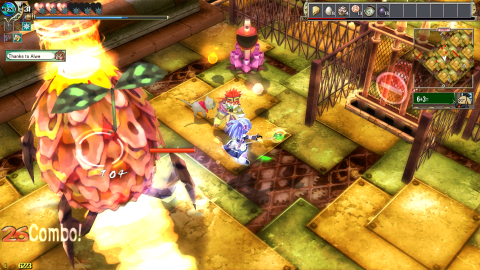 There are a handful of other additions too, including two new pet types – birds and fairies – in addition to the returning dogs and cats. A new area called the G-Colosseum has been added, a gaudy Vegas-style castle run by an over-the-top wrestler, who also acts as an instructor. Here, you can fight various characters for new added bonuses. There’s also an Adventurer’s Guild, where you can deliver the treasures you find in the dungeons, in exchange for money and improved guild rank. In replacing some of the Windows programs from the original game, there are now various “apps” you can buy and equip to serve various in-game functions. Most of these are typical of other action-RPGs – maps, a window that shows enemy names and HP, etc. – but you can also get weird things like a little quiz game, which gives you simple math problems and extends your combo by a bit if you manage to answer them.

As with before, most of the charm lies in the bright world, the character interactions, and the writing. Ragna and Alwen are a likable pair, especially since they set themselves up as equals early on – Ragna insists that he’d help Alwen regardless of their blood pact – and they both having amusing lines of dialogue that helps them transcend being mere RPG stereotypes. Though the story isn’t particularly elaborate, it is more of a presence here than the rather threadbare plot of the first title. In contrast, the dynamic between the heroes here isn’t quite as amusing as Pokkle and Pipolo’s, with their character types feeling a bit more typical and less overly goofy.

That’s not to say the game isn’t funny though – this type of game also lives for all of the weird little details found throughout, like the girls dressed in penguin suits (“Service Penguins”) who provide various guidance, or the little signs in the dungeons that show how each prisoner ended up there (examples include showing too much affection and emitting inappropriate odors). The first enemy you fight in the G-Colloseum is an extremely weak middle aged guy (who looks more like a generic office worker than anyone else in the game world), and it’s cute to see your cat grow a little lion mane when you max its levels. You can even see your character models put on weight if you get the scale gadget. Pippolo and Pockle also show up as NPCs, so it’s nice to see them again, even if they aren’t the stars anymore. 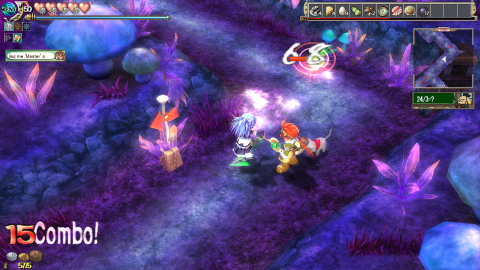 While the enhanced combat make this a substantial improvement over its predecessor, Zwei II is still fundamentally a simple action-RPG that relies on its charm to get by. It’s short enough that it doesn’t wear out its welcome by the time it’s done, but at the same time, it’s still not quite up to the level of Falcom’s better output.

Most Falcom PC games get post-release patches that add extra content. This one was so substantial that it was instead overhauled and released as Zwei II+. This includes a whole ton of extra items (including costumes, pets, and Anchor Gear upgrades), an extra super difficult dungeon, bonus modes at the G-Colosseum, trading figures that can be purchased at vending machines, and various balance tweaks. It also lets you skip movies and fast forward text on subsequent playthroughs. 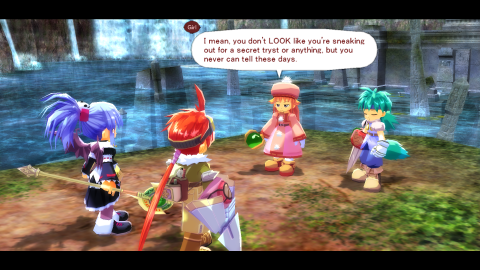 After remaining in Japan for nine years, Zwei II was finally released in English by Xseed in 2017. This version includes everything from the Zwei II+ release, plus added resolution and widescreen support. It also includes English voice acting (with substantially more voiced lines than the Japanese original) and a fantastic translation that perfectly captures the unique qualities of each character, with lots of funny dialogue too.

Zwei II was also the last PC game developed internally by Falcom, before shifting over to console and portable system publication. It seems like it wasn’t quite a success, as it was never ported outside of Windows. However, Nayuta no Kiseki, released in 2012 for the PSP, borrows many of the mechanics of the Zwei games, including the basic structure and the food-eating experience system, while at the same time drastically improving both its combat and level design. However, it trades these for a more typical JRPG story that’s missing much of the goofy charisma of the Zwei games. And despite having “Kiseki” in the title, it really has almost nothing to do with the core Trails of the Sky/Cold Steel series of games.