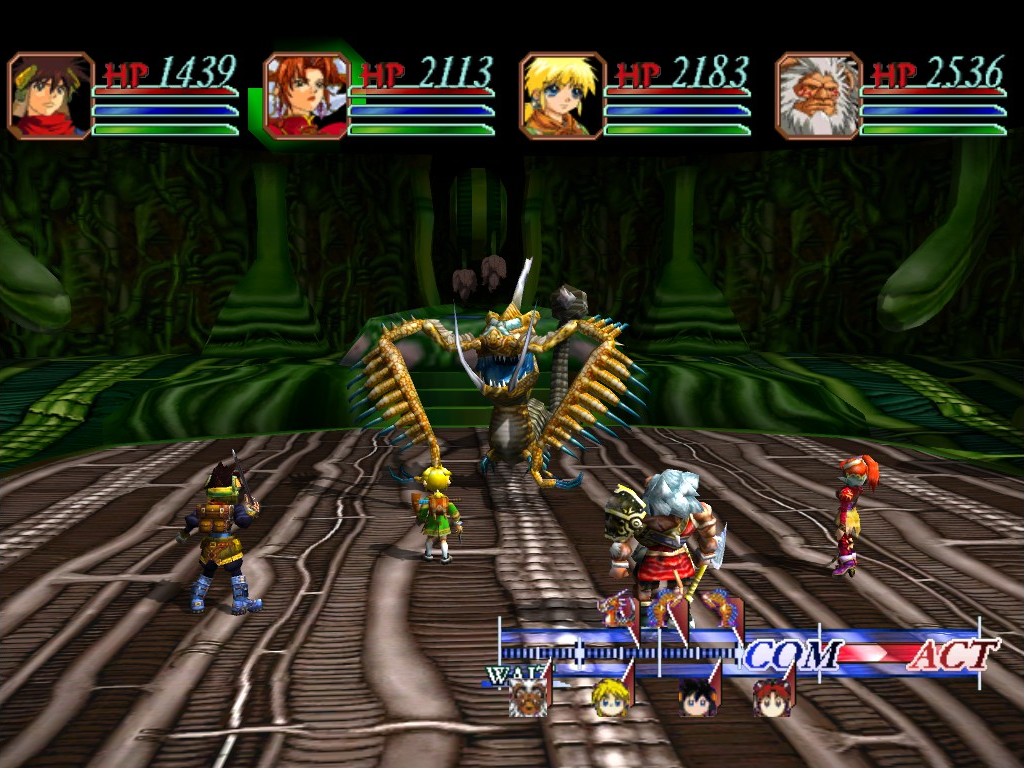 (Screenshots taken from the 2015 Anniversary Edition unless otherwise indicated.)

From the lightheartedness of Grandia, Game Arts decided to develop a sequel with a more serious tone. Though Grandia II maintains a level of silliness that Grandia games never stray too far from (with bright, lively colors, quirky characters and ridiculous situations) its emotional depth, mature thematic content, and somber narrative makes the sequel by far the more complex of the two.

Grandia II is defined by an excellent balance of good features. It is the peak of narrative excellence for the series by a longshot, though not in the battle system, which, while still great, would later be honed to an incredibly fun and more engaging form in Xtreme and Grandia III. But neither sequel matches the second game’s balance of battle mechanics with its exploration, story, characters, and worldbuilding. 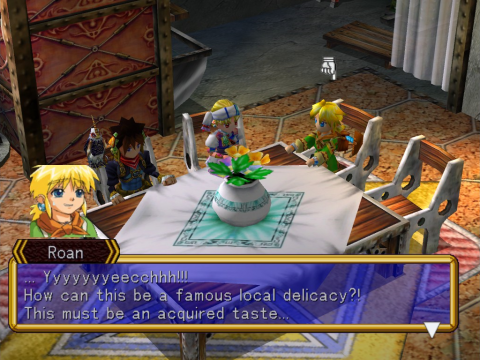 Thousands of years prior to the start of the game, a battle takes place between Granas, the god of light, and Valmar, the god of darkness. The battle nearly destroys the planet and ends with Valmar splitting into pieces, which are then scattered throughout the world. From there, the Church of Granas forms in honor of the god of light. It leads humanity to apparent prosperity.

The story proper begins when Ryudo, a mercenary “Geohound,” is hired by the church of Granas to escort a church songstress named Elena to a tower where she is to partake in a ritual intended to ensure that Valmar will remain sealed away forever. The ritual fails, however, and Elena is possessed by a piece of Valmar. Triggered by the seal breaking, the scattered pieces of Valmar begin to awaken and cause trouble across the land. Ryudo, Elena, and the various characters they encounter along the way have to fix the chaos caused by these pieces of Valmar and attempt to complete the ritual to ensure the dark god is sealed away again.

A cynical, smartmouth mercenary. Where Justin starts out as a starry-eyed dreamer and eventually learns to be more mature, Ryudo does the opposite, becoming a kinder, more positive person to those around him through the course of the story. Travels with his falcon partner Skye. Uses swords. 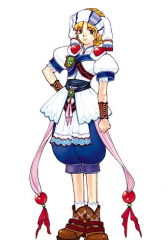 A sheltered, optimistic girl. Songstress for the Sisters of Granas, a convent-like order in the church. Utterly devoted to Granas. She is cursed by the Wings of Valmar during a ritual at the beginning of the game. Uses staves.

The physical manifestation of the Wings of Valmar. Inhabits the same body as Elena. Sassy, impatient and licentious. She takes a liking to Ryudo. Tends to take over Elena’s body whenever a boss battle is near. Uses crossbows.

A bright and energetic boy who joins the party while searching for a lost medal once given to him by his mother. He has connections to Cyrum, a powerful coastal kingdom. Uses knives.

A stoic, experienced warrior beast-man who joins the party on his search for the man who destroyed his village, who turns out to have a connection to Ryudo. Uses poleaxes.

An automaton created by the early followers of Valmar. She is possessed by the Claw of Valmar when the party first runs into her. She develops a close connection with Mareg. Like the famous android Data from Star Trek: The Next Generation, her arc focuses on her trying to be human by learning how to show and understand emotions and feelings. Uses chakrams, which are bladed rings. 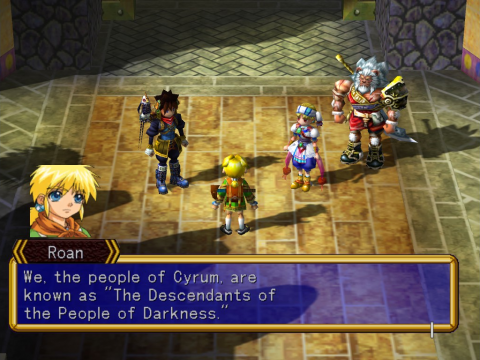 Thematically, Grandia games tend to have something to do with greed. The first Grandia dealt with the corruption that comes from the hubristic striving after technological advancement; Grandia II is about moral degradation. Each piece of Valmar represents a different vice brought to excess. For example, Valmar’s tongue makes a town mayor excessively money-grubbing and gluttonous, while food becomes like sand to his poor constituents and they begin to starve. Valmar’s heart makes someone so completely devoted to one person that no one else matters in their eyes, leading to them to even commit homicide.

Grandia II is also about the complacency spurred on by organized religion. The corrupt religious institution is a common enough trope in JRPGs, but it’s not often as central to the story as it is here. Final Fantasy X is probably the closest equivalent, though Grandia II predates that by about a year. The message here is less that all organized religion is bad, but rather that an excess of unquestioning obedience is sure to be exploited for evil ends.

The character interactions are noticeably more deep and meaningful than in Grandia. Part of this is aided by the fact that they meet much earlier than the majority of the cast of the first game, and thus spend more time together. More than that, though, they have more complicated interior lives. Ryudo’s brashness is revealed to be a facade covering up a deeply broken person. Elena has to deal with redefining her identity after not only realizing that her entire spiritual foundation built on lies, but also that her body has become a vessel for the dark god she’s spent her whole life opposing. Millenia struggles with her newly-acquired human desires and needs while, in fact, coming to terms with being a manifestation of an evil deity. Mareg has to reconcile his drive for personal revenge with the greater good. Everyone is much more nuanced here than in the original and they play off each other well. Even the most lighthearted skits and asides add something to the dynamic between the party. 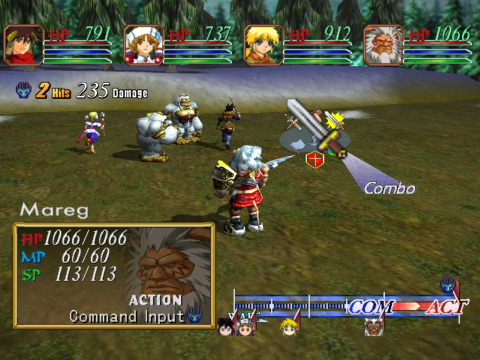 As mentioned, the battle system would go on to be refined further in the next two games, but Grandia II’s system is still wildly fun. Now fully 3D, it is fast-paced, smooth, and features a rewarding character growth systems, all of which the first game paved the way for.

Navigation is much better than the original as well. Although the 360 degree camera can cause minor confusion or disorientation, often the perspective will be locked to make it easier, and maps in general are much more intuitive to traverse this time, thanks in large part to the developers working with a “less is more” philosophy, with dungeons rarely being over long or repetitive.

Grandia II is still colorful, as all the series is, but it uses its palette with more consideration than last time around. Depth of detail is given first to the environments, with jungles, forests, towers and villages showcasing some great texture work given the limitations of the Dreamcast. In the original release, the polygonal models for the characters are fairly flat and blank, though later releases would give them more expressiveness. 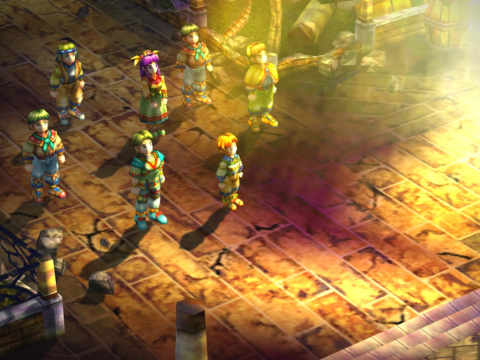 Dungeons are shorter as mentioned, though they don’t get any awards for intricacy or design. Even in the best of cases, Grandia dungeons are still a matter of knocking things out of the way to clear a path, changing water levels to access another floor, activating glyphs, and finding switches to open doors. It’s not bad. Here the simplicity at least carries with it a steady sense of progress, unlike the interminable dungeons from the first game in which you’re never quite sure when they’re going to end.

Instead of use-based experience for skills and spells, Grandia II has magic coins and special coins. These are used to purchase or improve magic attacks and special moves. Boss battles yield Mana Eggs and Skill Books, which boost stats. Both are interchangeable between characters, which is nice for those who might not want to lock characters into a certain battle role. Mana Eggs and Skill Books would go on to become an even more essential and complex component to the battle system in Grandia Xtreme. Here, they are simple modifiers that add some extra character customization, making a relatively easy game even easier if properly exploited.

Noriyuki Iwadare returns as composer for possibly one of his best soundtracks. The songs altogether use more string instruments than his other work, and in cutscenes and calm moments they offer a cerebral vibe to match a narrative focused on inner turmoil and spirituality. The series theme song is back as “Memory of the Gods,” more soft and orchestral this time. “A Deus” is another standout. When the tone gets more battle-ready, in particular in boss music, the sound gets heavier, and the songs incorporate electric guitar and organ pipes, sometimes with heavy synth that leans into an almost 80s hair band approach. 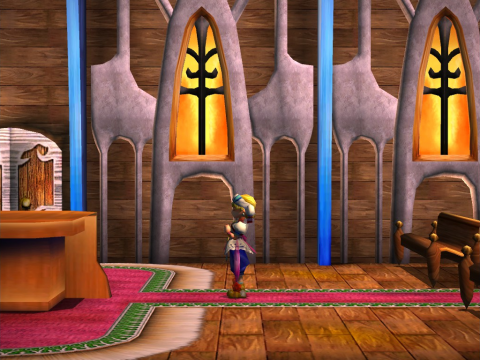 Grandia II has a strange re-release history. It was originally released in 2000 for the Dreamcast, with Ubisoft handling the localization and publication. The translation quality is still rather middling, but the voice acting is much better than the first game, particularly with the famous Cam Clarke as Ryudo. A rushed PS2 port came out in 2002, botched by graphical glitches, bad attempts at re-doing scenes in FMV, and a poor framerate. Unfortunately it was this version of the game that was ported to PC the same year and marred by the same results. This version was also then uploaded to the Japanese PlayStation Store in 2014.

In 2015, though, GungHo America remastered Grandia II using the base Dreamcast version and released it on Steam and GOG.com with the name Grandia II Anniversary Edition. This port surpasses by far even the Dreamcast original, offering gamepad support, revamped graphics with more detailed textures, lighting and shadows, Japanese and English voice options, and a new hard difficulty option. It can even load saves from the Dreamcast version if you can transfer them.

2019 then saw GungHo America update Grandia II Anniversary Edition, renaming it Grandia II HD Remaster Edition. The upgrade was free for customers who already owned the base game on PC. It also came out on the Nintendo Switch in a package with an HD Remaster of the first Grandia. This remaster added further improvements to sprites, UI, textures, the full-motion videos, resolution customization, and new language support for French and German. 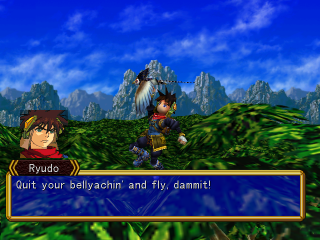 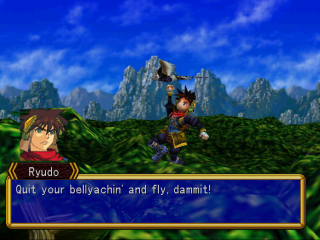