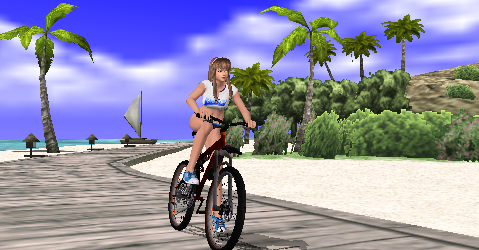 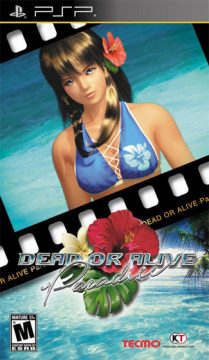 You’d think it would be rather embarrassing to play a game like Dead or Alive Xtreme in public, but nonetheless Tecmo eventually brought the series to Sony’s handheld. Dead or Alive Paradise could be seen as a port of the Xbox 360 game, but the jetski and tug-of-war games are noticeably missing. At first you don’t even have access to the Butt Battle and Beach Flag mini games, but those can be unlocked by watching a certain amount of relaxing scenes. The developers tried to make up for the omissions with the new character Rio, who works in the casino where she can be challenged for a round of black jack. she can eventually be unlocked as a playable character, but doesn’t have much in terms of personality.

For lack of analogue buttons on the PSP, the idiot-proof simplistic controls had to be sacrificed. The same goes for the graphics, which look still nice for a PSP game but the character models are noticeable reduced in detail during the beach volleyball matches and mini games, where there is more than one person on screen at a time. However, the Dead or Alive Xtreme series was always a relaxed couch game, and it’s flair doesn’t lend itself too well to a handheld format. The music comprises only a handful of generic tunes instead of a full soundtrack of licensed songs, too.

Exchanging swimsuits has been made a lot easier, as your partner will now accepy anything proviced they like you enough. But the game is still just a huge grind with no substantial reward, and the rest is the same as before: play monotous beach volleyball matches, engage in the few forgettable mini games and creep up on the girls with your camera when they go sunbathing. Another DOA Beach Volleyball game no one really needs.