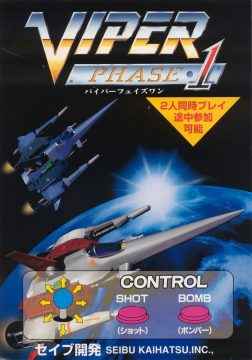 If Seibu Kaihatsu makes a shoot-em-up that is not billed as Raiden and does not look like Raiden, yet its gameplay is somewhat akin to Raiden, can it be considered part of the Raiden series? For the purposes of this series examination, absolutely. Viper Phase-1 could be considered “Raiden in space,” except that the previous games also take place in space, just not at the start of the game. Viper Phase-1 offers the same explosion-filled fast-paced incrementally difficult gameplay of Raiden, perhaps increased to an even faster speed than before. It is generally considered a spinoff of the Raiden series, particularly due to its integration into the Raiden Fighters series. Even before this crossover, Viper Phase-1 exhibits several traits recognizable from the classic games, though they may not be recognizable at first glance. You don’t seem to be fighting the Crassanians in this game, so the enemy is apparently a nameless alien space force. The mission: Blow up everything you can. 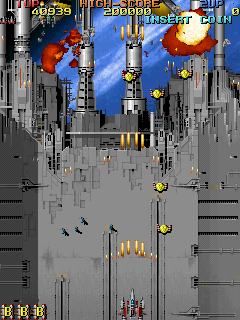 The graphics take on a different look than the naturalistic appearance of the classic games. Everything here is far beyond the stratosphere of Earth, taking place either above deep space or cold steel bases. The little details from Raiden carry over here, like the miniscule sprites of people running around bases and enemy debris flying around until impacting upon the ground with small shockwaves. They’re not particularly colorful (get used to gray), but the detail is rich, smooth, and consistent. The sound design is notably different from that of classic Raiden titles, significantly more upbeat and dynamic. The overall sound quality is better than the classic games, and as always, the first stage tune particularly stands out. You start fighting back enemies on your home base before heading out into a large ship armada, then going on to destroy an enemy spaceport and an enemy production factory. The latter four stages take you through an asteroid belt, another giant ship armada, the enemy home base, and a massive tunnel housing an equally massive missile.

The two player fighters were not named by the time of this game’s release, but when they were factored into the Raiden Fighters series, player 1’s ship became “Judge Spear,” and player 2 is “Blue Javelin.” Viper Phase-1‘s weapon system is altered slightly from the old formula. Your main weapon is a quick and decent-powered laser stream, and there are also four sub-weapons that each have their pros and cons. The blue L gives you a straight laser, very powerful but does little to help your wide attack range. In contrast, the red W gives you a wide vulcan, not very powerful but useful for picking off smaller enemies. The yellow M gives you burst missiles which do good damage and have decent spread, but fire off a bit slowly. The green N gives napalm missiles with explode outwards. Picking up another weapon icon of the one you already have only gives you more points; the only way to power up is by collecting P icons which appear instead of weapon icons at times. As in previous games, you can also pick up B icons to add to your bomb total. The bombs function similar to the classic nukes from Raiden, except they detonate a bit faster and generate a neat-looking perfectly circular explosion. 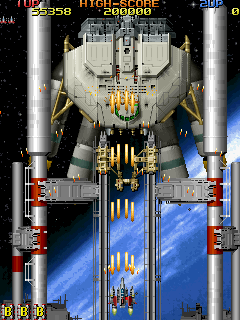 The scoring system is similar to Raiden, albeit with several differences. Aside from destroying enemies, you can also pick up medals under two flavors: Common 500 point red spheres and rarer 1000 point blue shields. This time around, medals aren’t limited to being ground items. Some enemies explode with several medals at a time after you shoot them down, and you should attempt to collect as many as possible before they fall off the screen. You get 300 points for every bomb left over, 100 for all collected medals (red and blue combined), and you also get 10 points for all destroyed enemies. These combined point totals are boosted by a multiplier dependent on your total percentage of items destroyed throughout the stage, including enemies, ground terrain, and all other destructible targets. Anything lower than 80% destroyed gets you a measly 10x multiplier, while you get 20x for anything between 80% and 90%. Higher than 90% can get you 30x, 40x, 50x, and a whopping 100x if you manage the feat of destroying 100% in a stage.

Viper Phase-1‘s level of difficulty is about on par with Raiden II. The enemies are similar to what you’d expect from Raiden: Aerial units that are quick but don’t take a lot of damage, ground units that take a bit more damage but are relatively easy targets, and large enemies that take several hits and often spit out more projectiles than everyone else. The difficulty curve is standard, starting out reasonably easy but getting rough around level 3, and it just gets tougher from there on out. You’re allowed to continue on the spot, so the main challenge is attempting to get as high a score as you possibly can. Viper Phase-1 almost qualifies as a bullet hell, though the amount of bullets normally doesn’t get so Cave-like, and you do have a moderately-sized hitbox. The key is to keep moving and be judicious with your use of bombs. Of course, the game is even more fun with the addition of a second player. 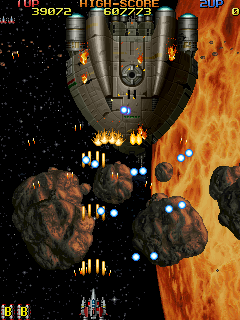 Naturally, the game has a fine array of kickass bosses to toss at you. The overall diversity of bosses isn’t quite as pronounced as in Raiden, but there are plenty of good fights in which oodles of bullets are tossed in your direction. The first boss is a large gunship that gets launched into space via rockets. The second boss is a large red fighter that launches off from within an even bigger battleship. Boss three is a large rail-mounted artillery platform with a red dome for its weakspot. Boss four is the heavily armored core of the weapon production facility which spits out these annoying spherical enemies that dog you throughout the entire stage. Boss five appears to be a large rock-crushing battleship that’s somewhat similar to the first boss, albeit with a sleeker design and even tougher. The most impressive boss might be the sixth, a giant fighter that has six large hexagonal turrets mounted upon it. What appears to be the enemy fortress core is the seventh boss, an ominous purple vortex flanked by a myriad of turrets that becomes gradually unstable as you shoot into it. The final boss, a big red spacefighter which may or may not be a large version of the classic Raiden aircraft is fought after being launched off of the gigantic missile seen throughout the entire stage. You only have twenty seconds to destroy the missile’s weak spot before you engage the last boss in an epic space duel. 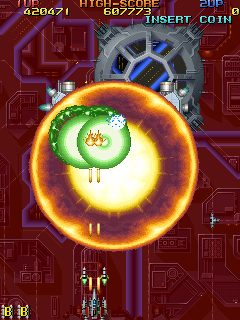 There’s not much else to say about Viper Phase-1 except that it’s a good shoot-em-up and worthy to be counted alongside the Raiden series. It has increasingly crazy challenge, a rewarding score system, and lots of explosions. Viper Phase-1 isn’t quite Raiden and yet has enough design elements that it may as well be considered part of the series, the Salamander to Raiden‘s Gradius. It doesn’t hurt that Viper Phase-1‘s OST is an unlockable bonus in the PlayStation release of Raiden DX. Whether or not it qualifies as a Raiden game does not matter, as the game itself is a fine shoot-em-up in its own right. It is thus a shame that it has not been released to any consoles, but it at least holds up reasonably well in MAME.