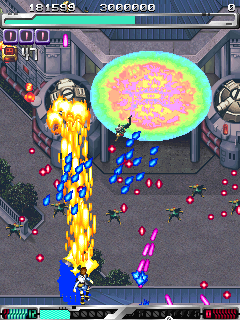 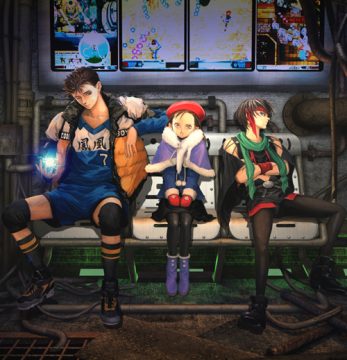 Cave’s ESP Ra.De. (pronounced “esp-raid”) is conceptually quite different from typical shoot-em-ups. Rather than taking the role of spaceships or other similar vehicles, you control one of three espers – that is, humans with extra sensory powers – who have the ability to fly and shoot lasers from their hands. It’s set in futuristic Tokyo in the year 2018, as powerful psychic Mrs. Gara and her goons, The Yaksa, plan on taking over the world. Mrs. Gara has amassed an army of tanks, psychic soldiers, robots, and even clones to remove any opposition by force. The setting takes the characters over school yards, city streets, malls and parks – a definite shift from the usual military installations and so forth – which, combined with the whole flying humans thing, gives it a very unique feel, even though it’s not functionally much different from other danmaku shooters from Cave. It seems to take place around Christmas time, as noted by the signs and the peaceful snowfall in the ending sequence. 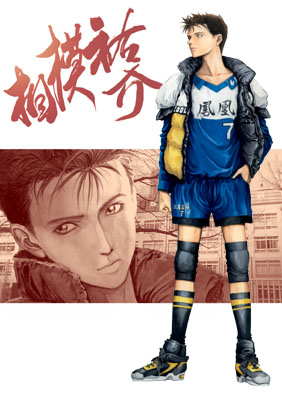 A boy in school that has just learned of his psychic powers and can barely control them. Yuusuke has power over fire. His story begins in high school when The Yaksa burst in and start killing everyone, looking for Yuusuke. Yuusuke embraces his powers that he hardly even knew he had and finds that his school is under siege by an army of tanks. Yuusuke uses fire and only hits right in front of him. He does the most damage and is very similar to the red ship in Dodonpachi. 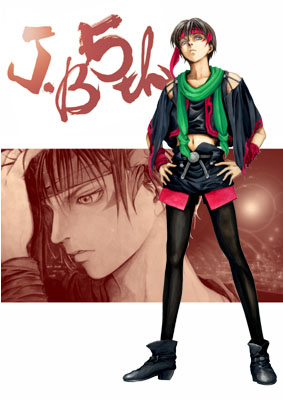 A psychic assassin that has been at Mrs. Gara’s throat for quite some time. He dresses like a superhero and wears a really cool cape that trails behind him as he takes to the skies. His story starts in a shopping mall, at night, and begins as ge swoops down from the sky and smashes a table in front of a Yaksa leader, demanding to know where Mrs. Gara is. The Yaksa refuse to speak, so Jb-5th goes on a rampage, killing everyone in the mall. He shoots powerful dark blasts everywhere and appears to be an anti-hero. Jb-5th has a wide shot that fires balls of purple energy in all directions. He plays similarly to the blue ship in Dodonpachi. 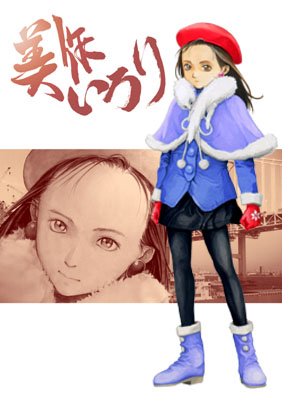 A psychic little girl that was orphaned by Mrs. Gara. She was always aware of her powers and promised her parents she would only use them for peace. Unfortunately, Mrs. Gara thought of her as a threat, so she sent The Yaksa in to kill her. Irori escaped while her parents died fighting off Mrs. Gara’s assassins. Her story starts in the bay area where she saves people from an oncoming missile strike. Irori has the strangest basic attack. When you fire, a green bird will appear in front of her and bullets will fire from it at various points in front of her, depending on where the wings are flapping. 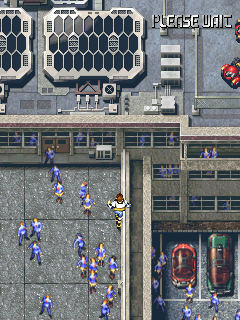 After choosing your main character, you are immediately dumped in the middle of a huge conflict. The first level is entirely dependent on which character you choose, but there is always action. In ESP Ra.De. you will fight hordes of soldiers, tanks, assassins, and many more of Mrs. Gara’s forces. In addition to the stylized tanks and mechas usually seen rolling through Cave games, there are numerous ground troopers, which explode in a splash of bright red blood and leave their crumbled corpses on the ground. Mowing down dozens of these at a time is quite the pleasure.

So, what do the psychic heroes have to fight against these insurmountable forces? Well, there are a handful of changes from the typical Cave game formula, at defined by Dodonpachi. Unlike most Cave games, which have both concentrated Laser and wide range Shot attacks, ESP Ra.De. only has Shot attacks, although you can still hold down the fire button to slow down your movement.

In most manic shmups, you get a screen-clearing bomb in case you get stuck in a bullet pattern or there is simply too much carnage on screen at once. ESP Ra.De. does not give you one of those, instead granting you a force field. Activating the force field makes you invulnerable until the shield button is released, and slowly sucks away your energy meter. While the shield is up, bullets that hit you turn into power-ups or orange blocks. Once you drop the force field, a powerful psychic attack is expelled, destroying everything in its way including bullets. 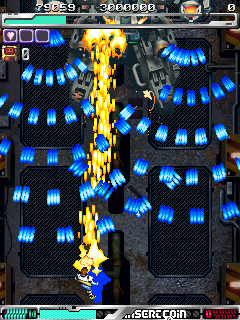 You also have a piercing attack that varies from character to character. Yuusuke has a flame-thrower that is very hard to aim. This makes sense and fits his character perfectly, as he is still having problems controlling his powers. Jb-5th has a concentrated burst of purple energy that goes straight in front of him and is very easy to aim. Irori has a wave of blue energy similar to Yuusuke’s, but it moves slower and is far easier to aim. The piercing attack cannot be used rapidly, however. There is a little bar at the bottom – when it fills up, you can not use your piercing attack until it empties. Fortunately, this only takes a couple of seconds.

The purpose of the piercing attack, besides doing extra damage, involves scoring. When you destroy things with the piercing attack, your enemies will sometimes drop power ups. You get more power ups depending on your multiplier, and you get more multipliers by hitting enemies with both your normal and secondary attack at once. Your multiplier goes up for each piece of the secondary attack that hit the enemy. If the enemy is killed by the primary attack, the multiplier goes up for each piece of the secondary attack doing damage to the target. What can be frustrating is that if a target is killed by a secondary shot, there is no multiplier gain. Normally, the multiplier level is hidden, but you can view it via code at the beginning of the game. You solidify your multiplier by collecting the power ups and orange blocks dropped from the fallen enemy. When your hero is at full power, enemies will start dropping orange blocks instead of power ups. Amassing a lot of orange blocks can give you some good points, but their true purpose is refilling your shield bar. Once you collect over 200 orange blocks (a common occurrence if you are skilled), you start to lose them, which acts as a timer. While the timer ticks down, your multipliers net you rare “E” tanks, which restores your shied bar and is obviously important for survival. Once the timer hits zero, your orange blocks are depleted, and you have to work your way back up to collecting 200 again before refilling that shield bar. Conveniently, your shield bar goes back up if you die, but your orange blocks and power are cut as a penalty. 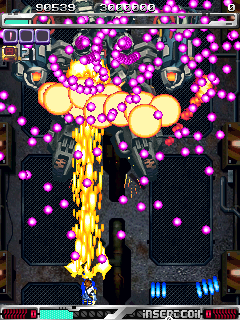 The scoring system may seem convoluted, but once you get the hang of it, you will be collecting orange blocks like crazy and figuring out tricks, such as easy x16 multipliers or other ways to receive extends. Interestingly, your extra lives are measured in hearts, implying that you never die, just lose health. This also ties into the way credits work. When you continue, you not only lose that impressive score, but you are also unable to switch to a different character. This makes sense too, because your character is not actually dead, just temporarily wounded.

Speaking of dying, unless you are a master, you will die a lot in ESP Ra.De., especially when you are still learning the levels. If the huge bosses and insane number of bullets on screen do not kill you, Mrs. Gara herself will. Really, what is a Cave shooter without a final boss that can send shivers down even a veteran’s spine? Mrs. Gara boasts two forms, her second one having an ungodly five health bars. She also sprouts strange, multicolor wings that she uses to launch devastating attacks that you have to slowly break apart. The worst part is that at first it seems like she is getting weaker with each form until you reach her final health bar. Just like how an animal is most dangerous when it is backed into a corner and close to death, Mrs. Gara shoots sprays of psychic blasts everywhere and has this really annoying blue blast that is fast and actively follows you. ESP Ra De would not be nearly as hard if Mrs. Gara were just a normal old lady. Instead, she is one of Cave’s most diabolical creations.

Obviously, like most Cave games, ESP Ra.De. exudes style. Every time you finish a level, newspapers flash on the screen, accompanied by a short message in English that tells you of the urgency of the situation. gProtect the world, even if the future of the world is uncertainh, it stoically claims. Another great moment is when you finally get inside of Mrs. Gara’s stronghold and meet her personal guards – an army of clone girls with creepy dead eyes, all named Alice. Not only is it a scoring wonderland, but it will leave you speechless with how unsettling it all is. 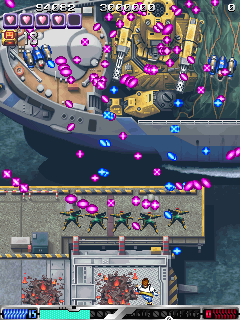 One of the coolest effects is when a cloaked spider tank crawls up to you and turns off its invisibility before attacking. There are also some cool parallax and scaling effects present, notably in the opening for Jb-5th when he dives down onto a table in the middle of a crowded shopping mall and smashes it in the most dramatic way you could possibly smash a table. Cave games are known for their excellent “take-off” sequences, and ESP Ra.De. is no different. Much of the artwork was done by Cave regular Junya Inoue, better known as Joker Jun, the man behind the art styles in Dodonpachi, Guwange, Dangun Feveron, and many other of Cave’s games. You can find a lot of ESP Ra.De. Artwork by Joker Jun that can capture the drama perfectly and other pieces far more lighthearted and comedic.

The audio is also outstanding. It’s typical video game electronica, balancing the upbeat and peppy themes like “Desperate School” (the school stage) and “Act in Judge” (the port) with the darker and more foreboding themes, like “Nightmare” (the mall) and Raging Decide (the boss theme). Characters are also fully voiced, although per usual protocol, much of it is in Japanese. Yuusuke, strangely enough speaks perfect English. He clearly says “Power up!” “Ready!” and many other words. Irori’s voice can be annoying, though. It is high pitched and she talks very fast. When she uses her force field blast it sounds like she is screaming “Tinkerbell!” When she respawns after losing health, it sounds like she is saying “Mr. Tickles!” She is actually talking in Japanese, but the effect is unintentionally hilarious. Other than Irori’s voice, the sound for ESP Ra.De. is awesome.

ESP Ra.De. is an awesome game that sadly, was never released outside of Japan, or ported to any platform. Cave has confirmed that there are rights issues with a home port due to publishing issues with Atlus, who had handled the arcade distribution. However, Atlus also published Guwange, which was released on the XBLA, so there is always hope for more people to experience ESP Ra.De., one of Cave’s underrated classics.

Special thanks to murasaki for clarifying the (rather complicated) scoring mechanics!