Despite the change in name, Aleste (pronounced “alesta”) is the sequel to Zanac. This is because the copyright for the name Zanac was held by Pony Canyon, and Aleste (and most subsequent games) were either self-published by Compile or published by another company. The name was used in many of Compile’s subsequent shooters, though this was typically changed for any of the games released outside of Japan. According to Masamitsu Niitani, it was named after a title of a doujinshi one of them had published. Another theory is that it was named after a lightning arrester, a device used to protect electrical and communication wires from lightning damage.

Aleste was first released on the Sega Mark III/Master System in early 1988, which was followed up by an MSX2 release later that summer. All screens on these pages (other than the comparisons) are from the MSX2 version. The Master System version was released outside of Japan and retitled Power Strike. The North American version was only sold via direct mail order by Sega, and has a different monochrome cover. The other releases use the same cover art as the Japanese version, but otherwise they are all identical.

Fundamentally, the game is extremely similar to Zanac. The main difference is that the trio of power-up boxes are gone, instead replaced by tiny ships that drop “P” chips when destroyed. If you collect enough of these, your main cannon will be upgraded. The buildings that dropped the screen-clearing bombs have also been removed. The subweapons have been renumbered from 1-8 (rather than 0-7), and the default weapon, the all-way shot, is the same. However, many of the other subweapons are all new, including a charge gun, which will create a small ball of energy in front of your ship that acts like a shield until you fire it; a ball that rotates your ship to protect yourself from fire; and a wave beam that you can aim. Many of these weapons became staples of subsequent Compile shooters. It also uses the same AI enemy generation system.

In both versions, the graphics are improved over Zanac, with brighter colors that are both less garish and used more consistently. The SMS version has both PSG and FM support, while the MSX2 version only supports FM through the MSX-MUSIC standard.

The story this time is that evil plant creatures, led by the computer Dia 51, have taken over the planet, so you fight against monstrous vines and other types of vegetation. In the SMS version, this is only listed in the manual, but the MSX2 version has opening and ending cinematics detailing the invasion. It also gives the pilot an identity – Ray Wizn, who has a personal stake in the fight after his girlfriend Yuri is injured in the attack. The planet under attack is also named Rimaru, while the manual says it’s Earth in the SMS version. 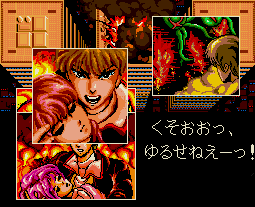 The SMS version only has six stages (plus a secret Area 0), while the MSX2 version has eight, including a brand new first level that takes place over a ruined city. The ROM size of the MSX2 version is twice the size (2 Mb over 1 Mb) which accounts for the difference. The MSX2 version was also released on disk.

Even though it seems like the MSX2 version would be the definitive release, it suffers from massive flickering and slowdown. This is also the case in the SMS version, but it’s even worse in the MSX2 version, as the action routinely drops to a total crawl, depending on what weapons you have equipped. 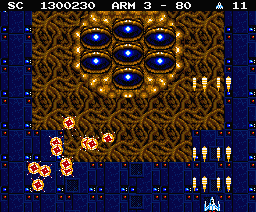 There’s also a bonus version of Aleste on the Disk Station volume 1 for the MSX. It includes an original level, at a very high difficulty setting. English versions of the MSX2 Aleste were originally available for Windows and iOS, distributed by Woomb. However, they are no longer available. 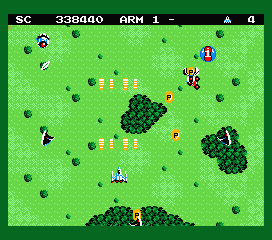