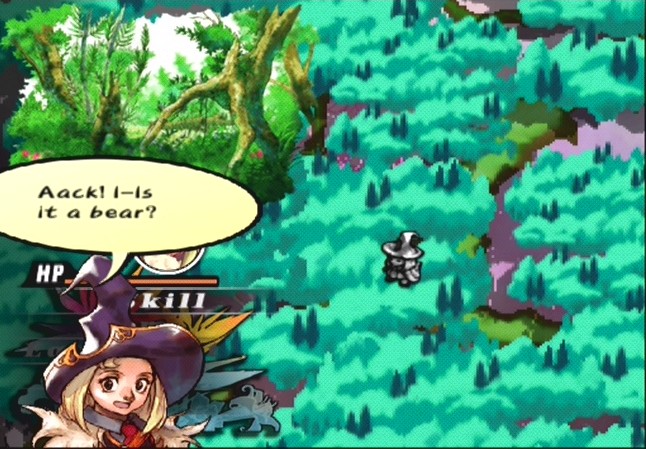 The first SaGa game released on the PlayStation 2 is by far the most controversial game in the series. While a few of the key elements of the series remain, the game includes a massive amount of features that were not only new to the series, but new to the video game RPGs in general. Symbolic of this is the fact that it is the only game in the series not to capitalize the “g” in the title. The highly experimental nature of the gameplay proved to be overly confusing and tedious to most, and the game was almost universally maligned by critics and RPG fans alike. However, there are some surprisingly deep elements, which make the game much more rewarding if you spend the time to learn its myriad of features. There are seven main characters this time, and like SaGa Frontier, each has their own storyline to follow. 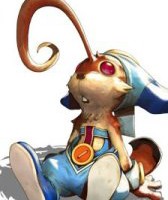 A slow witted, laid back member of the rodent-like Chapa Tribe. Despite his shortcomings, he is selected by his village’s elders to undertake a journey to find the tools needed to end a drought. 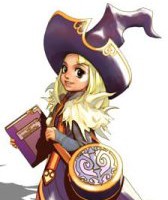 A young witch-in-training, who comes from a long line of magicians. When an old rival of her grandfather traps him in a mirror and scatters the rest of her family, she must go on a journey to locate her missing family members and save her grandfather. 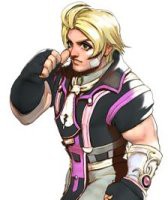 Named “Cash” in Japan, Kurt is a former knight of noble birth, who gave up his title in order to devote his life to helping the common man. He is the bearer of a mysterious cursed gauntlet that occasionally forces him into strange, dreamlike battles. 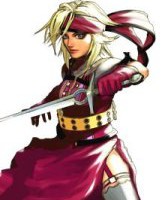 An ex-pirate whose life was turned upside down by the death of her school teacher husband. She finds new meaning by assisting the young Prince Henri, heir to a ruined kingdom. 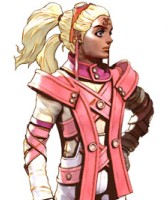 A talented inventor and blacksmith, who devotes his life to wine and women. However, upon seeing a photograph of a mysterious, beautiful woman, he becomes obsessed with her, and leaves on a journey to discover her identity. 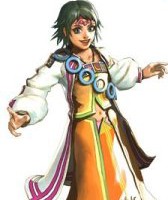 The younger sister of a famous fortuneteller. Though she does not have any clairvoyant powers of her own, she often pretends she does in order to scam potential customers. When her sister leaves with a strange knight to learn more of a potentially disastrous future, Ruby decides to journey with them. 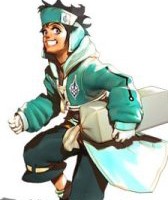 A delivery boy who begins life as a courier in order to find his brother’s murderer. He thinks of himself as a ladies man, but his attempts at wooing women always fall flat. 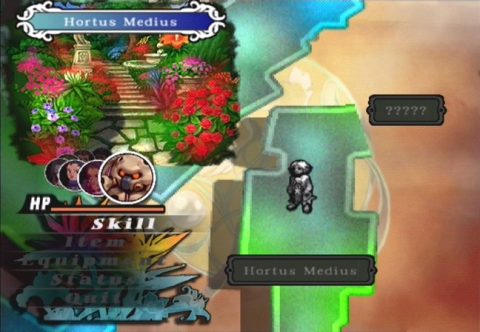 Unlimited Saga is meant to be closer to traditional pen and paper RPGs than any other type of game, so there’s nothing else quite like it out there. Upon beginning the game, most people are immediately taken aback by the rather bizarre method of traveling. The travel map, both on the overworld and within dungeons, resembles nothing more than a giant board game, broken into dozens of spaces, and everything is completely driven by menus. Your characters’ party is even represented as a small, pewter figure. Every “turn”, you can move your party one space, and every monster in the dungeon will do the same. When you land on a new square, you may find yourself encountering a group of enemies, or finding a random treasure or trap. The problem is, however, that nearly every dungeon in the game has a limited amount of turns, and any action you take consumes them. If you run out, you will be kicked out, and forced to restart the entire quest over again. This can get especially frustrating when running out of turns just before completing an especially long or difficult quest, as all of your efforts will have been completely for naught.

Perhaps the most infamous feature in the game, though, is its newly introduced “Reel System”. Every action you take in the game, whether it being attacking in battle, or attempting to use a skill on the map, is based upon this system. What it basically consists of is a slot-machine reel appearing, which you are then required to stop at the right time. In battle, hitting the right space on the reel can mean the difference between performing a powerful attack or a uselessly weak one. When using skills on the map, such as lockpicking or disarming traps, not hitting the correct space will result in failing the task, and possibly even taking damage. This system causes insurmountable frustration, as the element of randomness inherent to it can cause you to fail, even when performing actions that your characters are highly skilled in. Nothing is more irritating than failing a simple chest lock-picking a half-dozen times in a row or more, each time losing a valuable turn to complete the map. 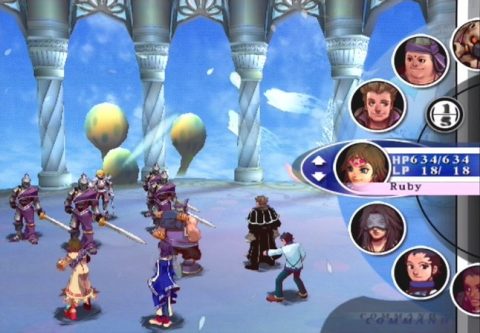 The battle system has also been completely revamped, with very little in common with the previous games. Learning new attacks through Glimmers is still here, although they now just add new spaces to your attack reels. Every round of combat, you are allowed up to five actions, which can be performed in any combination by your party. Thus, you can have one character attack five times, have five characters each attack once, or anything in between. However, any action taken in battle consumes HP. In this game, though, HP acts in a manner very dissimilar to any other RPG. HP acts merely as a buffer to your Life Points, which are the true determination of how healthy your characters are. Thus, if a character has a high current HP total, he is less likely to lose a Life Point when attacked than a character with little or no HP. However, having high HP is not a guarantee that you can avoid taking LP damage, nor is having zero HP a guarantee that you will take LP damage. The problem that arises is that the same system holds true for any enemy you encounter – they can only be defeated by damaging their Life Points. Experimenting to discover which kind of attack, or combination of attacks, is best at striking an enemy’s Life Points is the key in forming a successful strategy. Unfortunately, this system can be very frustrating to get used to. This is especially true for people used to the standard system in most other RPGs, who may very likely be confused as to why certain enemies aren’t dying, no matter how much HP damage inflicted upon them.

In yet another departure from the series, the way in which characters gain stats can also seem strange at first. Stats no longer increase directly from the result of battle. Instead, they are determined by each character’s skill setup. Each character has a grid, in which all of their skills are placed. These include battle related skills, such as being proficient with certain weapons, magic spells, or field skills, and at the successful conclusion of a quest, each character is given the chance to add a skill to their grid. Each space on the grid directly correlates to one of the character’s stats, and each skill placed will adjust them. Thus, the key to developing a powerful character is not only choosing good skills, but placing them on the gird in a manner that will best maximize their stats. 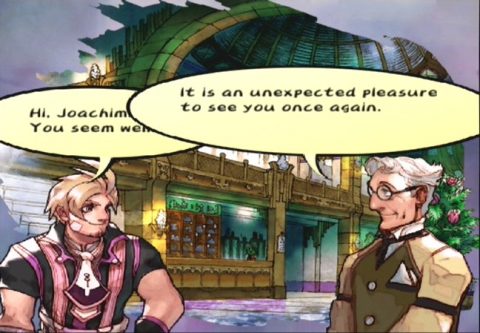 Perhaps the deepest, and most rewarding, new gameplay feature is the ability to create and alter weapons and armor through a blacksmith. At a first glance, the smith may only seem useful for repairing damaged weapons, as weapon durability makes another return in this installment. However, if one doesn’t take full advantage of it, they will be missing one of the most important elements in the game. By using different raw materials, it is possible to create new pieces of equipment that have a variety of innate skills and abilities attached to them. In addition, it is possible to use the forge to alter already existing weapons, changing their attributes in the process. The abilities that each piece of equipment possesses are determined by several factors, including the type of material used in its construction, the type of equipment it is, and even the weight. This leads to endless possibilities to create the perfect custom set of equipment that has the exact skills and abilities you desire. Is there a powerful sword you like, that just doesn’t have the abilities attached to it you want? Just use the blacksmith to adjust its properties to gain the right ones! While the system may seem complex, and not for one whom dislikes experimenting with trial and error, taking advantage of it to its fullest is definitely one of the most rewarding parts of the game.

The intro features some cool cel shaded computer animation, that makes it look like a living, breathing painting. The in-game battle sprites are also pretty huge, and it does look cool when the camera pans around the battle field and zooms up close to show them attacking. However, the rest of the game is pretty spartan, despite some pretty illustrations. Masashi Hamauzu is the composer once again, giving the game’s soundtrack a similar feel to SaGa Frontier 2, though it benefits from high quality synth that sounds remarkably like live instruments. Even those who aren’t fond of the game will find a lot to like in the music. 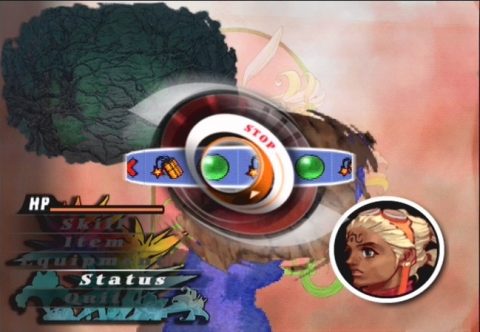 Ultimately, Unlimited Saga falls short due to how much it tried to be different. It tries to be TOO experimental, and jammed in too many new, and often confusing, things in at once. The result is a game that’s too complicated for many gamers to really get into. It can be rewarding if one learns its elements entirely, but doing that requires much more effort than it’s worth. Thus, while the game’s terrible reputation isn’t entirely deserved, it is certainly understandable.