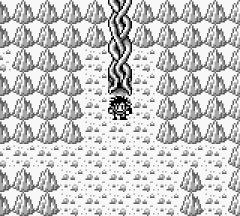 This sequel is very similar to the first game, in both story and gameplay. Once again, the player controls a party of four adventurers who must traverse a tower that connects to other worlds. This time, it is in order to gather Magi, of which there are said to be 77 pieces, which are the remnants of an ancient goddess, and stop those who wish to use their power to become new gods. Like the previous game, the party is created by the player, with multiple classes to choose from. The three character races from the first game return, along with the addition with a new class, the robot. Another new addition is the temporary fifth party members that will join you for certain events. 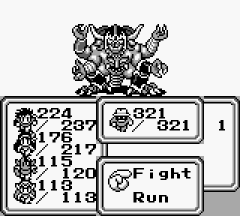 Robots
New to this game, Robots are somewhat odd in the sense that their stats are determined entirely by what equipment they currently have equipped. Additionally, any weapon that they equip will have its durability halved, but they’re able to be repaired by sleeping at an inn.

Dad
The main character’s father, who is actually the captain of a secret group dedicated to preventing the pieces of Magi from being used. He joins you several times during the game.

Ki
A priestess who was born with the power to heal others. She joins you near the beginning. Later, you must save her life by entering her body to stop monsters that are attacking her from within.

Isis
An ancient goddess with incredible powers. She will be able to assist the party once all of the pieces of Magi have been collected. 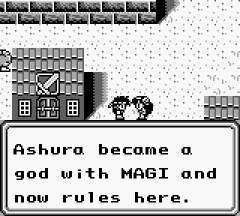 Overall, the game is very similar to its predecessor. Weapon durability is still featured, and the battles play almost identically to the original SaGa. However, several areas have been improved which make things much more convenient. When a character gains an increase in stats or learns a new ability, the game will actually inform you at the end of battle. This makes tracking your characters’ growth much easier. Additionally, a journal feature has been added, which automatically records important pieces of information for later reference.

In short, Final Fantasy Legend II is a refined, and more user friendly, extension of the gameplay established in its prequel. It’s also the first game in the series to be composed by Kenji Ito, who would go on to compose the music in nearly all of the following SaGa games.