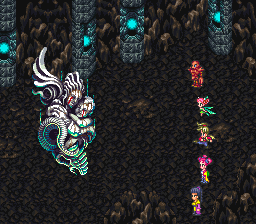 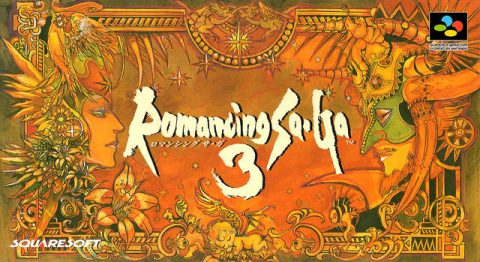 Romancing SaGa, released in 1995, is the final SaGa game to appear on the Super Famicom. This time, the plot focuses on the mysterious event known as the “Death Eclipse”. Every 300 years, this occurs, and all new born life on the planet dies. However, rarely, a single child will be spared, and will grow to have great powers. Taking place sixteen years after the most recent Death Eclipse, the game stars a group of adventurers, as they seek out the legacies of the powerful Devil King and Divine King, previous survivors of the Eclipse. Like the first Romancing SaGa, there are eight characters to choose from, who initially band together to prevent a rebellion before going their separate ways.

A green haired swordsman who lives in a small frontier village. The Marquis of Loanne hires him as a royal guard after seeing his skills.

Thomas is an intellectual merchant. Although he initially lives in a small village with his friends, he is actually the heir to a sizable fortune. As a merchant, he is the only character that has access to a business-oriented minigame.

A tough young frontiers woman who is skilled at wielding an axe. She is the childhood friend of Julian, although she rebuffs his romantic attempts.

Elen’s sixteen year old sister. Although she seems frail and meek, she possesses an unexpected destiny.

A famed mercenary, whose battle skills are world renown. He is seen by others as being rather greedy, as he rarely assists people without being paid for it.

The arrogant Marquis of Loanne who, early in the game, is forced to suppress a rebellion with the help of the other seven main characters. He also has sole access to a minigame, this one being a kingdom simulator.

The bodyguard of the Loanne royal family. When the Masquerade, an heirloom sword in her keeping, is stolen, she places herself in self-imposed exile until she can reclaim it.

The princess of Loanne, and Michael’s sister. After hearing word of a planned coup against her brother, she flees Loanne to seek help, finding the frontier village where Julian and his friends live. 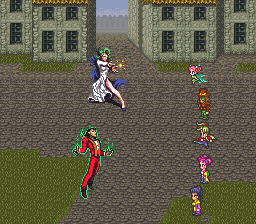 Identical the previous two games, Romancing SaGa 3 also features a larger cast of dozens of other characters whom you can recruit into your party. This time, however, the possible party members are much more varied and unique than the rather generic warriors of the past games. The oddballs that can join you include a superhero, a giant lobster, and even a living snowman. The mysterious Minstrel returns once again as well, and for the first time can actually join your party.

The graphics this time around have gone through a noticeable upgrade, putting it on par with Square’s other titles released around the same time such as Final Fantasy VI. There are some rather visually impressive attack and spell animations, and the enemies’ battle sprites are large and detailed. The basic gameplay, though, is nothing new, taking elements from the first two Romancing SaGas. The method of exploring the world and taking on quests is identical to the first Romancing SaGa. And while the kingdom building elements of Romancing SaGa 2 may be gone, its battle system returns, complete with glimmers, party formations and life points. Formations have been slightly tweaked further this time around, though, and play a large part in allowing your party to unleash powerful, and often times flashy, multi-tech attacks. One interesting new feature is the war game. At various points in the quest, you have the option of taking command of an army, and using them in a mini strategy game. While these are very rarely important, and not overly fun due to its lack of refinement, it’s still an interesting attempt to try something new in the series. 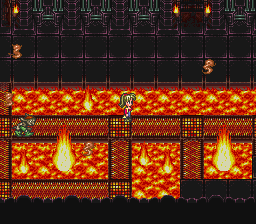 While Romancing SaGa 3 doesn’t offer too many new and exciting elements, it does greatly improve and refine the systems that were introduced in Romancing SaGa and 2. With a slightly easier learning curve than its predecessors, it is one of the games in the series that is most easy to get into. Combine this with an excellent soundtrack, once again scored by Kenji Ito, and you have a game that’s well worth trying out.