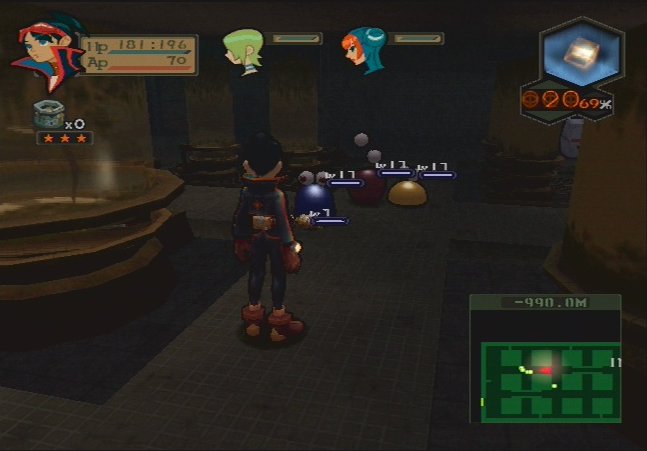 The first thing one notices when playing Breath of Fire: Dragon Quarter – the numeral “V” was dropped in the American release – is that it looks and feels nothing like the previous games in the series. Capcom has officially stated that Breath of Fire V takes place in its own continuity, separate from the others games, many fans speculate it takes place some years after Breath of Fire III. With the Goddess defeated, the planet begins to wither and the great desert expands. To survive, the races of the world eventually burrow deep underground and form a highly advanced society. In this subterranean world known as Shelter, a force of rangers is established to protect the citizens from the horrific denizens that they must share their home with. One such ranger, a low class grunt known as Ryu, must frequently patrol the mine shafts and abandoned chambers of the deep along with his buddy/mentor, Bosch. When Ryu is sent off to guard a train heading from one area to another, the mission goes awry, and this is where the true adventure begins. Ryu discovers the young Nina, only to learn that the polutted air is killing her. Unable to see her die a painful death – and wanting to escape from the undeground – Ryu swears to bring her to the surface, where she can breath freely. This is a far more difficult task than one would imagine.

The only inkling of the “Breath of Fire essence” that still remains are a few of the characters. Not really the characters themselves, per se, just their namesakes. Ryu, Nina, Ranger, and other familiar handles only seem to survive simply to remind us that this is a Breath of Fire game. The characters themselves are far fewer, but more closely knit and developed. For the most part, the game focuses on friendship and survival, with quite a few surprising twists and turns throughout the story.

This time around, Ryu is a member of a force of patrolmen known as Ranger. Ryu’s boring job eventually exposes him to a great adventure. His dragon powers return, but this time they are drastically different. He has a drastically low D-Ratio (1/8192), a ranking determined at birth, which means he’s pretty low on the totem pole.

This newest incarnation of Nina is a 12 year old skinny girl that looks like she’s just rolled out of the orphanage from Oliver Twist. She’s also mute this time, so now she shares more in common with Ryu than ever before.

Although he shares his name with dog-boy from Breath of Fire II, the fact that he’s Ryu’s friend is where their similarities end. Bosch is a much higher D-Ratio than Ryu, but he is rather modest about his stature and considers Ryu a close friend.

The newest entry into the well established Worren clan, Lin initially comes off a bit cold and secretive, but eventually gives away tidbits about herself as the game presses along and becomes closely entwined with Ryu and Nina. She’s a member of an anti-government group called Trinity. That silly cap needs to go though.

Leader of the Rangers. Gives Ryu and Bosch their orders.

The leader of the Trinity organization. He is wanted by the Regents and has really creepy, bugged-out eyes.

There are only four playable characters, although you spend a majority of the game with Ryu, Nina and Lin. There’s also a large group of bad guys called the Regents, extremely powerful government officials/dragon slayers:

One of the Regents. He lost his eye during a battle with a dragon and has never forgiven himself for this failure.

Another Regent. She has the power to control time and space at will.

This androgynous little boy, also one of the Regents, can see visions of the future and has a pet named Rasta.

The lowliest of the Regents in terms of D-Ratio. Jezuit can turn into a shadow.

One of the higher members of the Regents. Wields the legendary “Beast Blade” techniques and has a duo of disciples.

The leader of the Regents. This mysterious fellow controls pretty much everything in the underworld with the exception of Trinity. He is known as “the Origin”, and senses that the dragons will soon return.

Dragon Quarter plays unlike anything else in the genre. It’s closer to Vagrant Story than the previous Breath of Fire games, because it’s essentially a dungeon crawler at this point. Battles are no longer random. Enemies are visible before combat begins, and now you can bait them and set traps for them to give yourself a major advantage. The combat system itself has been totally revamped with semi-real time, tactical strategy elements. When a battle begins, you can freely move your character about the playing field while it’s their turn. Movement costs a certain amount of AP however, as do the attacks you use once you’re in range to attack. Thus, the more you have to move to get to an enemy, the more limited your attack options become. Once you’ve reached your opponent, you can continually use attacks in one long combo until you run out of AP, and then you switch to the next character. Each of the three main playable characters has a set purpose – Ryu can only use melee attacks, but is the most powerful; Nina has an array of magic attacks that can attack multiple enemies or create traps for foes to step into; and Lin can use her gun to repel, attract, or otherwise manipulate the position of your foes. Each battle is a unique puzzle to solve, so the constant combat never really gets old.

The real genius (or downfall, depending on how patient you are) of Dragon Quarter‘s gameplay is the Dragon Counter system. Once Ryu acquires his staple dragon powers, a counter comes into play that raises from 0 to 100%. As Ryu walks around, it slowly increases, a timer ticking away towards your inevitable death. As Ryu uses his dragon powers, the counter rises much faster. When it reaches 100%, the game ends and you will have to start over. From scratch. This is massively intimidating, because it severely limits the amount of times you can use your powers, saving them for only the most drastic of situations. In turn, the dragon powers are far, far, far more powerful than anything seen prior in the series. If they weren’t so drastically restricted, it would definitely unbalance the game. 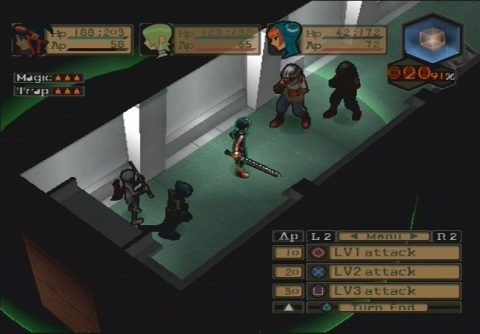 But starting over isn’t necessarily a bad thing. Dragon Quarter uses something called the Scenario Overlay (SOL) System. It’s extremely difficult to play through Dragon Quarter in one clean sweep. In fact, the game rewards you for being masochistic and ruining your file. You see, when you restart the game, you keep all of your skills, some of your experience, and you get to collect new things. Since the battle skills are more important than your level, you can easily blast through early dungeons (or just avoid most enemy encounters), so replaying doesn’t take very long. Not only that, but when you replay the game, new story elements are interjected (mostly added cutscenes), expanding the game tenfold. After you beat the game, your D-Ratio is upgraded, so you can visit previously inaccessible rooms. The game’s built around replay value, which is good, because it’s relatively short for an RPG.

Of course, this gameplay style is extremely atypical and puts off a lot of players. It takes a lot of patience to restart a game over and over again, until you become acclimated with it. As rewarding as Dragon Quarter is, those gamers who are used to the more traditional fare of Final Fantasy and the earlier Breath of Fire games will likely have a hard time swallowing this entirely alien experience.

In the American and Japanese versions of the game, you can technically save whenever you want, but it’s really a temporary “suspend” save that forces you to quit, and deletes the save when you reload. Borrowing an element from the earlier Resident Evil games, you need to use a Save Token at save points in order to make a permanent save. This means that when you die, you’re sent back to the last permanent save, so you better not run out of Save Tokens, which are limited in number. Annoyingly this was changed in the European version so you cannot save outside of save points. To compensate there are more Save Tokens supplied throughout the game.

Dragon Quarter doesn’t look too shabby. The artistic style isn’t exactly attractive – everyone looks to be anorexic – but the game has a wonderful, bleak atmosphere. You really get the sense of a society barely holding together and a civilization desperately clinging to life by walking through the streets. The graphics are a mixed bag. The character models are pretty good and have some of the better cel-shading to be seen on the PS2, but the backgrounds are rather bland and the dungeon designs randomly generated look, even though they’re not. 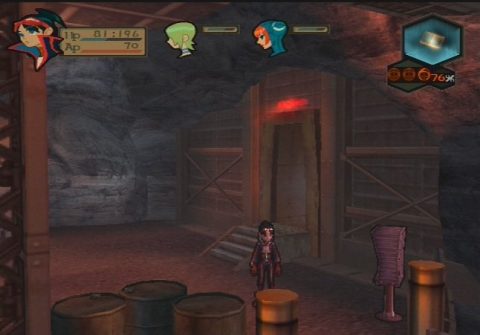 The music was produced by Yasunori Mitsuda (Chrono Trigger, Chrono Cross), and composed by Hitoshi Sakimoto (Final Fantasy Tactics, Ogre Battle), two legends of the video game music scene. While much of the soundtrack consists of Sakimoto’s trademark orchestral fare (including some amazing melancholy tracks), there’s a lot of techno and industrial influence, which does a wonderful job of amplifying the feeling of hopelessness and despair that the visuals already encapsulated so well. The ending vocal song feels more than a little bit out of place, though

As it turns out, Breath of Fire: Dragon Quarter is a great game. But it fails somewhat as an entry to the series simply because every last ounce of that Breath of Fire feeling has been wiped clean, and it’s now unfamiliar and depressing, like an amnesiac loved one. As a stand alone game, it’s one of the best and most innovative RPGs on PS2, but as a Breath of Fire, it further alienates and rejects fans who fell in love with the unique style of the earlier games.