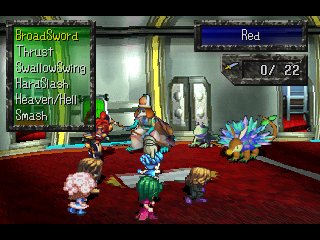 With SaGa Frontier, the series made its move to the PlayStation. It also marked the triumphal return of the series to the United States. Like many of the previous games, there are several characters from which you can choose your main character. However, unlike the first Romancing SaGa and 3, each character has their own entirely unique storyline. While there are still many side quests common to all characters, each character has their own set of unique story quests, which culminate in a different last boss fight for each one. 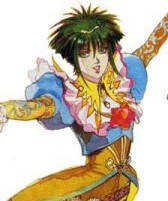 Originally, Asellus was a normal human girl. However, after an accident, she is abducted and given a transfusion of blood by the mysterious Mystic, Lord Orlogue. When she wakes up twelve years later, she finds herself as the world’s first Half-Mystic. Her plot deals with her attempts to escape from Orlogue’s clutches, and come to terms with her unique status. 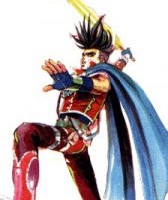 In a story clearly inspired by Kamen Rider, when Red’s father is murdered by the criminal organization, Black X, he is saved by a mysterious figure, who grants him the ability to transform into the hero Alkaizer. Following the heroes’ code of justice, he seeks to track down and destroy Black X’s four generals. In an amusing homage to the superhero genre his story is based on, the rest of Red’s party is unaware of his role as Alkaizer, thus forcing him to constantly find ways to transform without their knowledge. 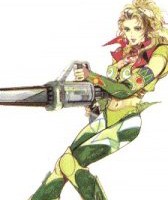 A gorgeous ex-model, whose life is turned upside down when her police officer fiance is murdered by the evil Joker, and she is convicted for the crime. After her release from prison, she is recruited and trained in gunplay by the secretive Gradius organization, and sets out to discover the truth behind the Joker. For those of you who enjoy playing dressup, Emelia is the character for you, as she has a variety of costumes to wear, ranging from military-style combat uniforms to playboy bunny outfits. 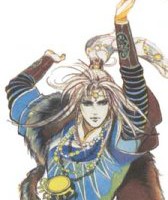 Blue is an arrogant, unfriendly mage-in-training, who has been sent on a quest to learn all of the elemental magic. His rival on this quest is his more sociable twin brother Rouge, whom he is fated to duel to the death. Interestingly enough, while you always start off using Blue, it is possible to switch to controlling Rouge for the remainder of the game by purposely losing the duel against him. 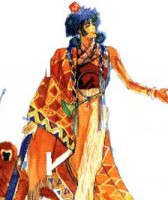 Lute is an easy going, overly friendly bard, who becomes embroiled in the legacy left by his dead father. Lute has, by far, the shortest story in the game, as it consists of only one dungeon. 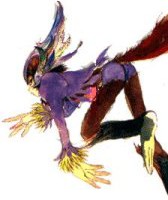 Known as “Coon” in Japan, Riki is a young monster who is sent out on a quest to save his homeland, by seeking out the mysterious magical Rings of Margmel. 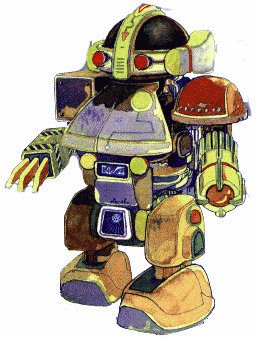 A wrecked robot who was found and rebuilt by the inhabitant of the town of Junk. When its memory is erased upon reactivation, it seeks out to discover and complete the mission it was constructed for. 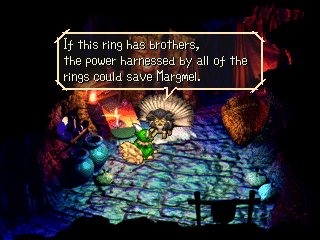 SaGa Frontier is a fusion of elements taken from both the original Game Boy trilogy and the Romancing SaGa games. It marked the return of the races from the Game Boy games: Humans, Mutants (now called Mystics), Monsters and Robots have all returned, with most of their original defining traits. The setting, a string of connected worlds each with their own theme, is a clear homage to the settings of Saga 1 and 2. However, the open-ended method in which you are allowed to explore is taken from the Romancing SaGa trilogy. The battle system is also largely based off of the Super Famicom games, although some elements of the Game Boy trio were used for the Monster and Mech races. Gone, though, are party formations. The graphics are still mostly sprites, with prerendered backgrounds when exploring and polygonal backgrounds when fighting. During battle, the camera will pan and zoom around the field, giving a more dynamic feel to the action.

Introduced in SaGa Frontier is the combo system. Occasionally, several of your party members’ special attacks will string together, resulting in considerably higher damage. Figuring out which skills comboed the best together was a key in defeating powerful bosses. This system would remain in place, with some tweaks, for the remainder of the series.

The fact that each of the seven main characters had a unique quest certainly gives SaGa Frontier great replay value. The fact that the plots tie together at places is especially cool, as it gives a sense of an overarching plot that encompasses all seven quests. Unfortunately, the game feels unfinished and unpolished in places. In fact, there was a planned eighth main character, Fuse, whose story would have helped tie the various plot threads together. Sadly, this was cut due to time restraints, and he merely appears as a minor character in the game. Combine this with a rather shoddy English translation, and you have a game that is somewhat difficult to fully grasp the overall plot.

With the move to the PlayStation, the game finally developed a look distinct from the Final Fantasy games. While it uses prerendered backgrounds when walking around and polygonal backgrounds during combat, the characters are all super deformed sprites, though quite a bit more detailed than in the 16-bit games. It still doesn’t have nearly the budget of Square’s more popular series, though, and there’s not much in the way of CG cutscenes. The battle camera is also positioned at a low angle, giving a dramatic view of fighting. The music, still by Kenji Ito, maintains the same style, complete with tons of battle themes.

SaGa Frontier is also notable as it was the last game that possessed the same overall feel that the series had developed until this point. The next two games would be very different than the rest of the series, though for entirely different reasons. Perhaps symbolic of this is the fact that it was also the last SaGa game scored by Kenji Ito until the remake of Romancing SaGa was made nearly eight years later.