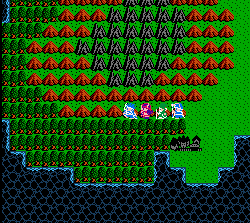 Dragon Warrior III (subtitled Soshite Densetsu e… or “Into the Legend…” in Japan, and granted the subtitle Seeds of Salvation with the smartphone release)) begins with a scene that’s become extremely cliche’d in Japanese RPGs – you wake up to the sound of your mom calling for you. It’s your birthday, apparently, and it’s time to set off on a long journey. Your father, the powerful warrior Ortega, disappeared many years before and has been presumed dead, so you need to follow in his footsteps and complete the task he could not by defeating the archfiend Baramos. After talking to the King of Aliahan and getting some cash, you’re instructed to head to the local inn to draft up a party of characters. Similar to the original Final Fantasy, Dragon Quest III allows you to create your own characters by picking from one of several different classes. You can now take up to four party members in battle at once, a step up from three in Dragon Quest II. At any time, you can ditch one of your party members and create another, although it’s generally easier to just pick three and take them through the whole game. 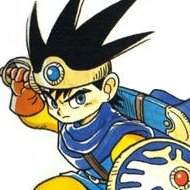 The hero is the most well balanced character in the entire game. Technically they can be either male or female (you choose right at the beginning), but they look the same, and the NES game still refers to you as a guy anyway. Only the main character can be a Hero, and he/she isn’t allowed to change to any other classes. 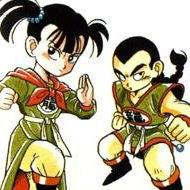 Fighters are the physical powerhouses of the game, with a high probability of landing critical hits. Like the Black Belts/Monks from Final Fantasy, they prefer to fight bare-fisted. However, they don’t have any magic abilities. 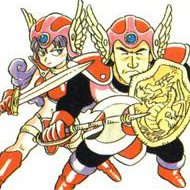 The Soldier is a pretty well rounded character, similar to the Hero, although without any magic abilities. 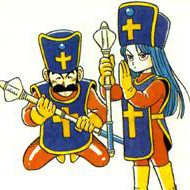 These are the typical White Mage style characters – great for healing and removing status ailments, but pretty weak all around. 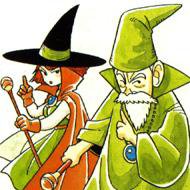 The other type of magic user is even more physically frail than the Healers, although they can do significant damage with their offensive spells. 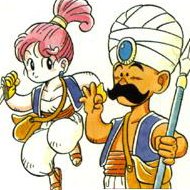 Merchants are also pretty well rounded characters (though not as much as the Soldier.) Their big bonus is that they can get extra gold from battles, so you don’t need to grind as much to buy equipment. He can also appraise items to tell you what they do and how much they’re worth. 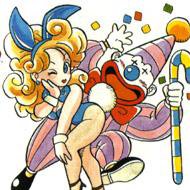 These guys basically just screw around in battles and ignore your commands. They have high luck ratings, so you get more items when defeating enemies. Otherwise, the only advantage is that you don’t need a Book of Enlightenment to make them a Sage, so they’re easier to promote, if you can tolerate using them for long enough. It does mark the first time you can play as a bunny girl in an RPG, at least. 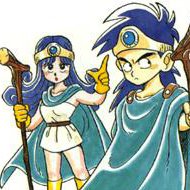 Basically the best class in the game, the Sage learns both powerful offensive and defensive spells. However, it’s not initially available – you need to find a Book of Enlightenment/Satori, obtained by venturing into a certain dungeon, or randomly dropped by a specific enemy. (Or just raise a Goof-Off as mentioned above.) 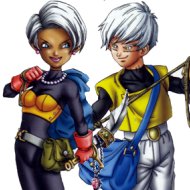 A class new to the Super Famicom and Game Boy Color version (not found at all in the NES game), the Thief is quick, and can wield boomerangs and whips, which are also new to the remakes. These pictures use the artwork from the GBC version, which is arguably worse than the original drawings.

Dragon Quest III puts a twist on the formula by letting any of the secondary characters change classes once they hit Level 20 (and reach a shrine at a certain point in the game.) When they change, they’re degraded back down to Level 1, but they keep all of their skills and some of their stats learned in their previous class. For example, this allows you to build a Wizard with the defense capabilities of a Soldier, or a Swordsman with the healing skills of a Healer.

A number of annoyances from the previous games have been addressed. First off is the addition of the bank, which lets you store extra items and gold. The cash stored in the bank isn’t affected when you’re wiped out, so it’s easier to conserve your money. There’s now a day/night cycle that runs as you walk across the overworld. Different activities will occur in towns depending on what time of day it is, and you’ll face different monsters when traveling, with the more powerful foes lurking around in the dark. The Return spell lets you travel to any town of your choice, rather than just returning you to your last save point. You’re also encouraged to scavenge for various seeds, which can be given to any character to increase their strength, HP, or other statistics. One town has a monster arena, where you can bet on the outcome of fights, which replaces the lottery from Dragon Quest II. 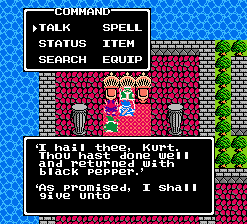 Most of the quest is pretty straightforward, with a couple of cool touches. At one early point in the game, you save a kingdom from peril, and the king offers to give up the throne to you. If you accept (and he’s really persistent), you get to walk around the castle and hear your subjects grovel at your feet. Being a king is pretty boring though, so eventually you can leave and get on with your quest. Once you get your ship and sail around a bit, you see that the game world heavily resembles Earth. The pyramids of Isis are located approximately where Egypt would be. Romoly is in Italy, Portoga is in Portugal, and Edinbear is on an isle analogous to Great Britan. And in contrast to Final Fantasy‘s airships, Dragon Quest III allows you to control a gigantic bird named Ramia (or Lamia) to soar all over the map.

More interesting, though, are its links to the original Dragon Quest. Once you defeat Baramos, you enter a place called The World of Darkness, which turns out to be Alefgard from the first game. It’s almost an exact replica, instead of the small island found in Dragon Quest II. Once you beat the final boss, you’re bestowed upon the heroic name of “Erdrick” (or “Loto” in the original translation), revealing that you are, in fact, the legendary hero so often revered in the first two games. A number of items from the first game are used here too – the Ball of Light, which was your goal in the original game, is used to destroy a cave well. The Echoing Flute, which was used to put the golems asleep in the first game, is played to uncover the locations of several hidden orbs. It’s really cool discovering that the whole game is a prequel, and the game even ends with a screen that says “To be continued to Dragon Warrior.” Square-Enix pulled a similar device almost twenty years later with Final Fantasy VII: Crisis Core, a prequel to Final Fantasy VII. 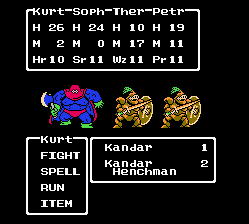 Even though it still looks and feel primitive, Dragon Quest III‘s numerous improvements make this one of the best RPGs on the original Nintendo Entertainment System. Although the previous games were popular in Japan, Dragon Quest IIIwas the first real breakout hit, and was the game that started the urban legend regarding a law that Enix was only allowed to release Dragon Quest games on weekends due to too many people skipping school or work. (It was just a suggestion by the Japanese government, possibly in jest.) As a result, it’s frequenting cited as the best in the series, especially by long-time Japanese fans.

Dragon Quest III was ported to the Super Famicom in 1996, using the gameplay engine from Dragon Quest VI. In addition to the enhanced music (and some additional songs, mostly used in battle), the graphics have substantially improved, and the enemies in battle are now animated. The controls have been improved, and you also walk much faster. It’s now easier to find additional Books of Enlightenment, so it’s simpler to promote characters to a Sage without having to rely on Goof Offs. The bag from the later games has been implemented (so you can store multiple items when traveling without having to store them in a bank) and a whole new class, the Thief, has also been added, so you can use multi-hit weapons like whips and such. There’s also a new intro where the townspeople discuss the birth of the hero, and you see Ortega fighting a dragon. 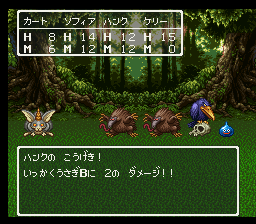 There’s also a new “personality” stat, which determines which stats are increased when a party member levels up. For the most part, personality is determined by what books they’ve read during the adventure. However, the hero’s personality is determined with an Ogre Battle-style quiz at the beginning of the game. During the Hero’s dream, before the quest officially starts, you’re asked several different questions, such as “Do you spend more money on weapons than protective equipment?” or “Do you often dream?” or “Do you think it is unforgivable to break a promise for any reason? or “Do you think cats are cuter than dogs?” Then you’re presented with a small scenario, and the game then judges you on how you react. In one of them, you’re faced with an old man who requests that you move a boulder – you can either do him a favor or walk away. In another, you’re cast as a demon about to ransack a village – you can either wreak havoc or flee. Once you begin the game, you’re also given the ability to set the stats of your party members when you create them.

There’s a Sugoroku mini-game, which is a Japanese board game similar to Monopoly. Similar to the lottery tickets from Dragon Warrior II, you need to obtain tickets during your adventure to play this. There’s also an extra dungeon that opens up when you beat the game. This features an area labeled “Zenith Castle”, a reference to the second trilogy of Dragon Quest games, although it’s not officially related. Curiously, the “puff puff” massage parlor was completely removed from this remake.

Like its predecessors, Dragon Quest III was ported down to the Game Boy Color a few years later. It’s based on the Super Famicom version and has all of the additions that that version brought to the table. Additionally, there are now additional subquests to find regular medals, similar to Dragon Quest IV, as well as special “monster medals” dropped by certain enemies. As can be expected, the graphics are a significant downgrade (and looks different than the NES version), but the music is about the same quality as the initial release. This version was translated into English and released in America, and uses the original Japanese names for most the characters (so Erdrick is now Loto), but keeps the spell names from the previous games. “Sugoroku” is now known as “Pachisi” in English.

Like the first two Dragon Quest games, this one was ported to mobile phones, then to mobile smartphones. Unlike those versions, this one uses the graphics from the Super Famicom release instead of redrawing them. And thankfully, they’re free of the scaling bug that made the previous smartphone releases look incredibly ugly. However, it is missing some things, like the monster animation, and some pieces of music. Plus, since it’s based on the SFC game, it’s missing some of the small extras that were added to the GBC version. Still, it’s the best version of the game available in English, and plus like the other mobile ports, it’s been retranslated too. 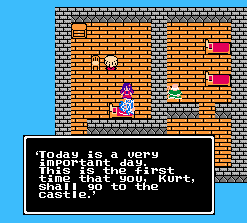 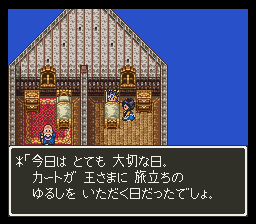 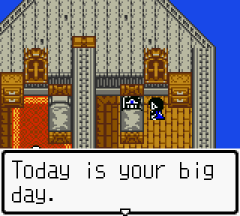 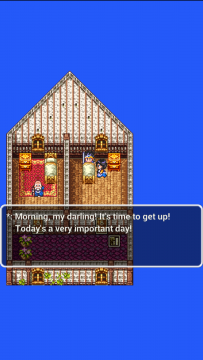 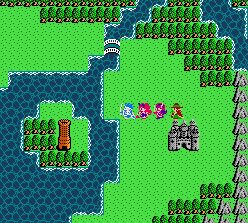 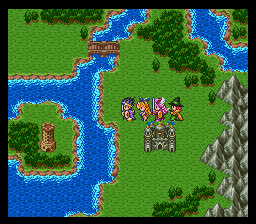 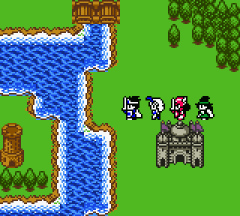 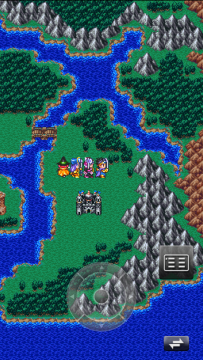 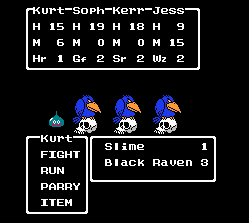 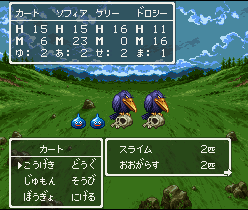 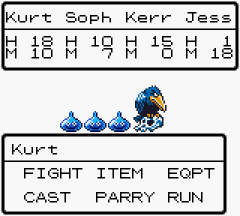 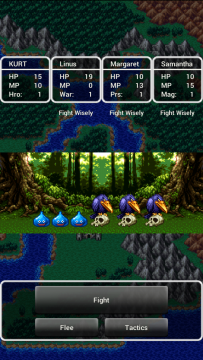