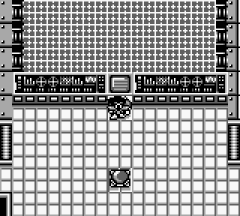 The third title is the only game in the series whose development was not headed by Akitoshi Kawazu, and it shows. Instead, it was made by the team that would later go on to create Final Fantasy Mystic Quest, and there are some very close similarities to that title in both gameplay and overall look. It is, by far, the most generic entry, with many of the unique elements of the first two games being eliminated or greatly dumbed down. The plot, this time around, involves time travel. The future has been devastated by beings from the floating “Pureland”. In a last ditch effort to prevent this, three children have been sent back in time to the present day to try to change history. It is the first game to have a set cast of main characters. Like Final Fantasy Legend II, several characters will join your party as a temporary fifth member.

A male human, and the main character. He, along with two friends, come from a devastated future. They were sent as children to the past, in the hopes that they could prevent the dismal future from happening.

Another one of the children sent from the future, Curtis is a male mutant. Aside from that, he has very little personality or dialogue.

A female mutant who was sent back in time with Arthur and Curtis. Like Curtis, she gets relatively little development past that.

A human female, and the only one of the four permanent party members that comes from the present day. She was raised alongside them, and thus joins them when they begin their journey. She seems to be especially close to Arthur.

In the present day, Dion is a snot-nosed brat who lives in the same town as the heroes. Once the party travels to the future, they find that he has grown into a powerful warrior, who joins their party several times.

Dion’s childhood friend, who also becomes a skilled fighter in the future. She is the only one who can claim the legendary sword Excalibur, and joins the party in order to find it.

The man responsible for sending the children into the past. He is skilled in both weapons and magic, and joins the party near the end of the game. 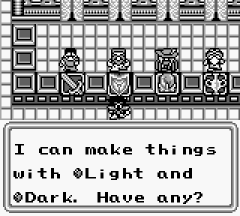 In many ways, Final Fantasy Legend III is a vast departure from the rest of the series. Gone is the weapon durability featured in the first two games. In addition, it is the only SaGa game to feature a normal level-based growth system, with experience points being awarded for defeating enemies. These two factors make it one of the easiest games in the series. The music was composed by Ryuji Sasai, who later went on to compose Final Fantasy Mystic Quest and Rudra no Hihou for Square. There are a few decent songs, but overall, the soundtrack is weaker than the previous and future games in the series.

Although none of the characters start off as the Monster or Robot classes from the previous games, any of the four main characters can become one. When enemies are defeated, they can drop meat or robot parts, and eating or installing them will change a character into an intermediate form, Beast and Cyborg, and an additional one will transform them into full Monsters or Robots. Consuming the opposite type will revert them into their default classes. The fact that any of the characters can change their class at any time does allow a greater degree of customization, but it also significantly reduces the challenge. 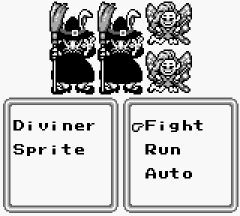 There are several other changes made in this game, though not all of them are bad. It’s the first in the series that will automatically target the next available enemy if the enemy initially targeted is already defeated. Additionally, the characters are now shown on the screen along with the enemies. Though it ultimately does nothing to change the Dragon Quest style battles, it’s still a nice touch. The ability to jump while in dungeons is yet another addition, though this is largely just a novelty outside of a few puzzles that require its use. In the end, though, Final Fantasy Legend III is the weakest of the Game Boy trio. Just as the team made a dumbed down Final Fantasy game in Mystic Quest, their attempt at a SaGa wound up being generic and largely uninteresting.