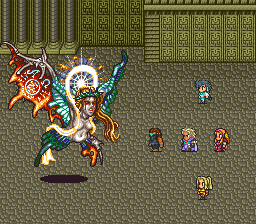 The second game in the Romancing SaGa trilogy is certainly unique in its choice of main character – you play as an entire line of emperors and empresses over a long period of years. The plot recounts the struggles of the royal family of Avalon, as they seek to unite the world against a grave threat. Seven legendary heroes have returned to the world, but instead of the saviors everyone hoped for, they have come back as demons intent on taking out their rage on all in their path. 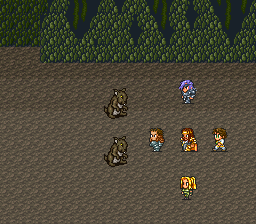 As a generational game, you control the current emperor and empress of each generation. Once several years have passed in each generation, or if your current emperor dies in battle, he is replaced by the next in line, who inherits all of his predecessors’ skills and abilities. For the most part, you are able to choose each generation’s ruler from any of the character classes that are available to you. However, there are three specific rulers who you will control at certain points.

The initial Emperor of Avalon whom you begin the game as. He is the first to attempt to fight against the Seven Heroes, but is killed almost immediately as a result.

Gerard is Leon’s son. When he is first introduced, he is pathetically weak. However, after inheriting his father’s skills upon his death, he gains the power necessary to combat the Heroes.

Although you can name him/her whatever you like, this character always has the same appearance. This is the last ruler of Avalon, who you control during the final battles of the game. As the culmination of generations of skills being passed down, he/she is a force to be reckoned with. 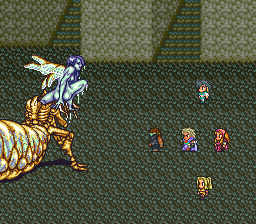 Continuing the style that was introduced in the first Romancing SaGa, Romancing SaGa 2 is highly open ended with numerous quests available. One interesting feature is the ability to increase the size of your empire. Completing certain quests will result in the various minor kingdoms and provinces you assist pledging their allegiance to your throne. The more territory your empire encompasses, the more money the royal treasury will receive in taxes. You can then spend the Empire’s capital in building new facilities, and researching new weapons and spells. And, of course, it goes without saying that it is pretty awesome opening the map and seeing that your empire controls most of the known world.

The battle system of Romancing SaGa 2 is very similar to its predecessor. However, there are several improvements that make things infinitely more convenient. For example, each character’s weapon abilities now correspond to types of weapons, rather than to specific weapons themselves. Thus, a character who develops a high level using a sword will keep his abilities for ALL swords he equips. Battle formation, which was very basic in the first Romancing SaGa, has been expanded upon immensely. Rather than simply allowing you to position your characters on different rows, you are now given many different formations to choose from. Each one arranges your party members into different shapes and adjusts their stats. New formations are learned by recruiting different characters. 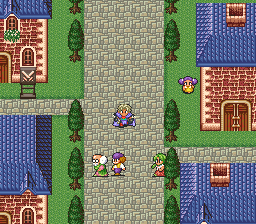 Romancing SaGa 2 not only improves upon pre-existing features, but also introduces several new gimmicks that would prove to be enduring. This id the first game in the series in which the Life Point system was utilized. After each battle, your parties’ HP will be automatically refilled, and all negative status ailments will be removed. This may seem overly generous, but there’s a catch. Each character has a set number of Life Points which does not replenish after each battle. Anytime their HP drops to zero during combat, and any time they’re struck after that, they’ll lose a LP. When their LP hits zero, the character is removed from your party, forcing you to finish the area without them. This feature would remain present in all of the following games with little change, with the unique exception of Unlimited Saga. The game also saw the introduction of the famous “Glimmer” system of learning new special attacks.

Romancing SaGa 2 was ported to smartphone platforms with some enhancements, then later released on Windows and on the PlayStation Vita. This is the only version of the game officially available in English.