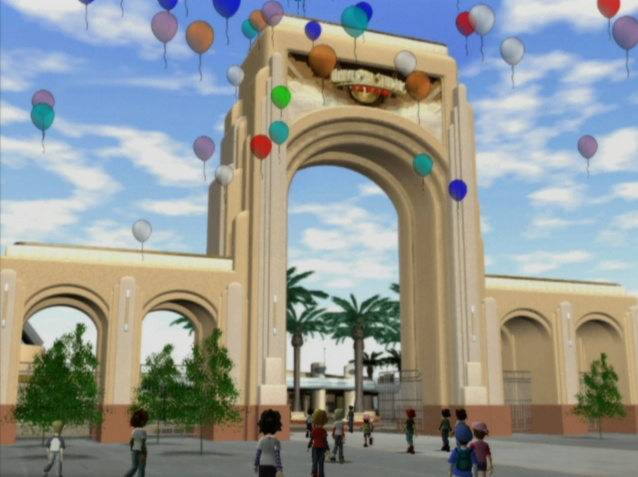 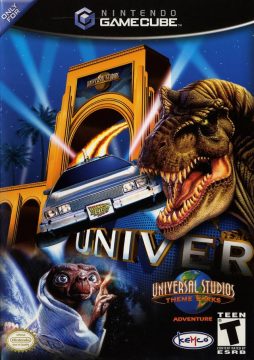 And thank God for that. If any of the real Universal Studios Theme Parks were anything like the one created here in this GameCube title, it’d be the sort of place that you’d take your kids in order to shatter their hopes and dreams, filling their little souls with hate and cynicism.

At the beginning, you choose from a handful of little kids. For the purpose of this kusoge entry, we will pick the most ridiculous one, this one being a black child with an unsettling grin, wearing pink striped socks. 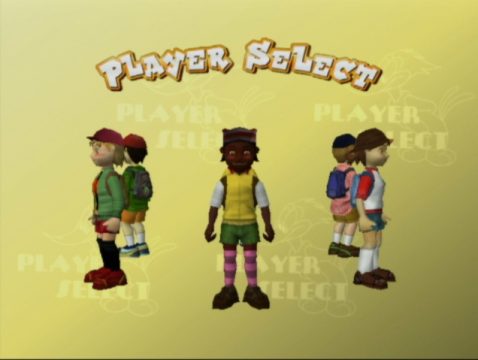 The friendliest face you come across at the entrance is Woody Woodpecker who, in a terribly creepy and off-putting voice, informs you of one of the most exciting things a kid can hear – there’s a stamp collection contest going on! The goal is to visit all of the rides in the park and master them, so you can get stamps to fill up your card. There are also additional quests, including finding tiny letters to complete the Universal Studios logo and shaking hands with randomly generated patrons dressed as famous Universal movie monsters. The other major subquest involves picking up garbage. The points gained from these dreadful tasks can be used to purchase hats.

The visuals are comprised of polygonal characters over pre-rendered backgrounds. You can find a map at the beginning, but it seems to bend to the unreality of the game world, where exits aren’t really exits and perfectly traversible looking roads appear to be just painted on. Providing you can stumble your way to one of the rides, you will play a mini-game. The Wild, Wild, Wild West game (not based on any movie in particular) involves a shooting gallery where you compete against a full grown adult, who will gladly lord his victory over an eight year old child if you lose. The rest of the games are based on E.T., Jurassic Park, Jaws, Back to the Future, a general Animation Studio one, and Backdraft. And also Waterworld, because despite the game being published in 2001, apparently they didn’t realize the movie had been considered a massive joke for over half a decade. 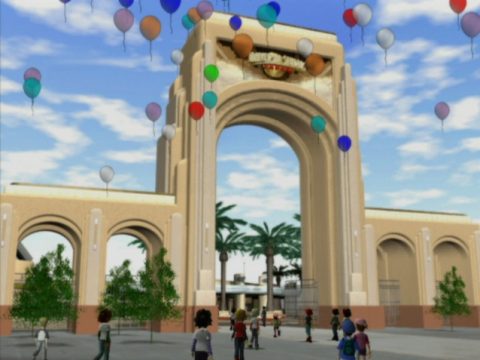 Regardless, you might not be able to play these games anyway, because “the lines are too long”, purposefully recreating the worst parts of an actual amusement park experience. Instead, you’re supposed to track down the sexy lady version of Woody Woodpecker (such a character does exist), who quizzes you on Universal Studios movies. For a game obviously developed for little kids, these questions are way, way too difficult, and some are even pretty obscure for adults. How much does anyone remember about Dragonheart, really? If you actually manage to win these quizzes, then more minigames unlock. 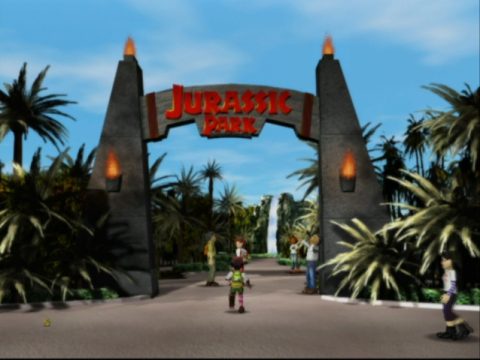 The worst part of the game? There is an entrance to the generic Universal Studios theme park, but there is no exit. The kid you choose at the beginning is stuck inside its unhallowed walls, forever doomed to wander around aimlessly, bump into walls, and get sexually harassed by cartoon woodpeckers.