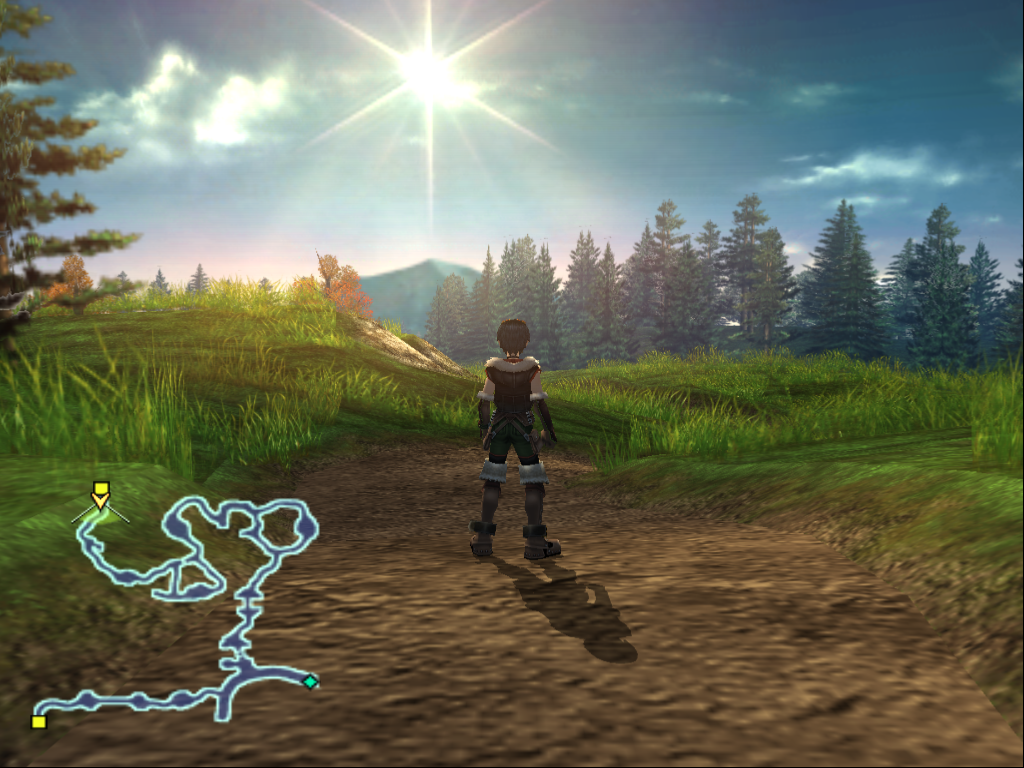 Grandia III starts with a sequence in which a brave young pilot rescues a beautiful princess. The princess is trapped in a tower under siege, her face covered by a veil. The pilot flies past and catches the princess just as she falls from her balcony. The pilot, his rescued damsel in his lap, turns to her with a cocky smile. Then her veil blows off, revealing that she is ugly and has a big nose. He makes an expression equivalent to the “womp womp” noise and they fly off together, the pilot now being accosted by a girl who isn’t as hot as he’d hoped her to be.

This sequence can stand in as a metaphor for Grandia III in general. Not how you might first expect it to work, though: It’s not that this is a game with the veneer of beauty that actually reveals itself to be ugly once you really look at it. No, rather, Grandia III is a game that undermines its heritage of cheerful, sincere adventure with an immaturity so out of left field it’s offensive. 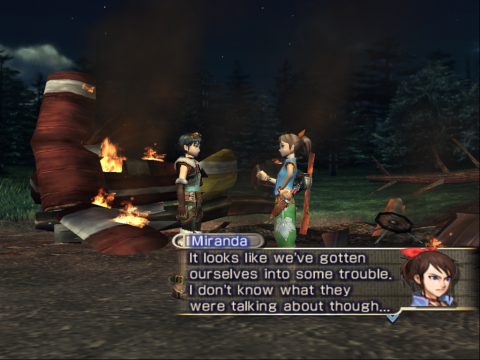 From this sequence the game turns to its protagonist Yuki, who is building an airplane with his buddy Rotts in the hopes of flying it across the ocean, a feat only accomplished once by Yuki’s idol Sky Captain Schmidt. Miranda, Yuki’s mother, discovers his plan and stows away on his plane, revealing herself after they’ve traveled some distance. But Miranda has little time to berate her son as they quickly notice a girl being chased by several armed men in the forest below. Yuki swoops down to get involved and accidentally crashes the plane.

Yuki and Miranda then rescue the girl, Alfina. Alfina, they learn, can speak to Guardians, twelve sacred beasts who ushered the world into peace to end a global war about five millennia ago. Yuki and Miranda decide to help Alfina by escorting her on a pilgrimage to gain the powers of the Guardians and protect the world from a new threat coming from the rogue guardian Xorn.

A teen boy who dreams of being a pilot. A typical Grandia protagonist, somewhere between Justin and Evann in terms of maturity. High-spirited, headstrong and adventurous. Uses swords.

Unusual for a JRPG, Yuki’s mother is a playable character for a good portion of the beginning of the game. A very caring single parent, and equally headstrong as her son. Yuki’s father, incidentally, is never made clear or emphasized as important. Uses knives. 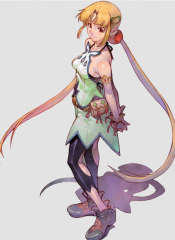 A Communicator or “an interpreter for the gods” in her words. She is soft spoken and easily parallels Elena from Grandia II. Uses staves.

A sailor and gambler who travels the world on his boat. Once he wins it back after losing it in cards, that is. Like Miranda, he doesn’t stay on the permanent team roster for too long. Uses long spears.

Leader of the Baccula Settlement. The Baccula are a spiritual race known for fortune telling and magic cards. Cold and cynical at first because of the disappearance of her boyfriend, but like many of the series’ standoffish characters (Millenia, for example) she has hidden depths of compassion. Uses magic cards.

A beast boy from Dragon Valley. Uncomplicated and carefree, he left his home village due to its strict rules. Travels with his beloved dragon Shiba. Despite his small stature, he’s actually one of the greater powerhouses of the team. Uses flails.

Mayor of a town in a strange land once inhabited by the Guardians that has now been turned to crystal. This causes her personality to turn a bit hopeless. She can travel between dimensions with the power of her magic violin. Another character who is playable only briefly. Uses wands. 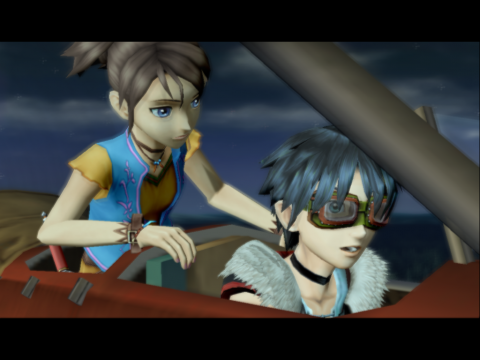 The character models as designed by You Yoshinari are fantastic, so it’s a shame the writing doesn’t hold them up as well.

Basically, Grandia III has a strange, obnoxious relationship to women and using them as comic relief. It’s amazing how much of the game, especially its first few sections, are dependent on the ridiculous behavior of fat, ugly, loud women. These scenes are not only wildly unfunny, they confuse the mood of a game already too tonally inconsistent. Even potentially really cool characters like Miranda are undermined by how they’re written, as she’s morphed into a love interest for Alonso after being established as a dynamic, independent character.

The main cast is still a good ensemble, Grandia III deserves that much recognition. But the story is flat and cliche, a sort of hollow rehash of the Grandia II‘s framework, and these characters don’t sync up in quite the same way past casts have. Yuki and Alfina aren’t as compelling a love story compared to the Ryudo/Elena/Millenia love triangle or Justin and Feena either. Even Xtreme made room for scenes demonstrating the cast’s dynamics despite its threadbare plot in ways more memorable than what’s on display in this game. 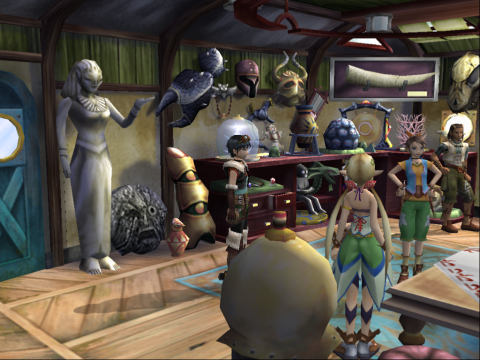 The overall conflict that is supposed to carry the player through the game is too cliche and too simple. The villain’s motivations don’t ascend to anything more complicated than “I want to destroy the world kinda just because.” It reduces the more complicated themes of Grandia II to thin, basic “love triumphs over hate” messaging. Grandia III isn’t a long game either, between 20 to 25 hours, which can be either a good or bad thing depending on your preferences. The original PS2 release had it come on two discs due to the amount of FMVs.

But people don’t enjoy Grandia III for its story: If anyone praises it, it’s for its battle system. Gameplay-wise, battles are all it leans on. There aren’t really sidequests. There are barely any branching paths or exploration in the whole game—which, to be fair, is typical for the series. It really relies on battles for entertainment, and, thankfully, they do deliver.

The battle system isn’t especially different from Xtreme. Like usual, battles are fast paced and hinge on timing and character placement on the field. Four characters are playable at a time. Cancelling enemy attacks remains the key strategy. The IP Gauge, now a circle, works as usual. Everyone can still either use Combo or Critical to attack. Mana Eggs are simplified, without the entertaining fusion system of Xtreme, so magic options, while still important, are fewer than before. 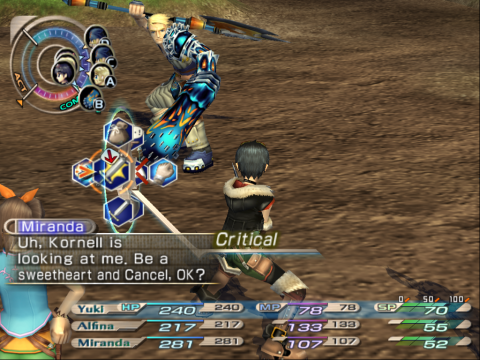 One of the more entertaining innovations is aerial attacks, or special moves performed when a character knocks an enemy into the air. These moves are performed immediately after acting and, if the enemy is defeated, the enemy may drop more valuable items. Characters will also give you hints on how to act during battle. If an enemy is about to attack Miranda, for example, you might see a dialogue bubble pop up with her asking you to cancel that enemy’s action. This feature isn’t as handhold-y as it might appear, and is a nice way to inject some personality into the battle mechanics. While not as deep as Xtreme‘s system, Grandia III‘s battle system is easy to pick up and rewards strategizing. It also arguably works better with Grandia III‘s straightfoward structure, where in Xtreme the frequent battles could make dungeon crawling even more interminable.

Grandia III is also really beautiful. While the character models, though serviceable, haven’t aged gracefully, the settings hold up. You’ll rarely find yourself in a location you wouldn’t expect to find in a JRPG, but they are all still colorful and charming, often hosting that quirky Grandia architecture. Where the story doesn’t manage to capture to the adventurous wonder of the rest of the series, at least the aesthetic does.

Noriyuki Iwadare’s music is fantastic as usual, capturing that mix of whimsy and grandeur seen in all Grandia soundtracks. Like Xtreme, the battle theme is a standout that rarely gets old despite how often you hear it. The opening theme song “In the Sky” by Japanese singer Miz is catchy, delightfully reminiscent of a 90s alt rock star like Liz Phair or Alanis Morissette.

The English voice acting isn’t great but not bad. There are some recognizable voice talents in the cast too. Yuki’s voice is good, played by Johnny Yong Bosch, a fairly well known anime and videogame voice actor probably currently best recognized as Lio in Promare. Wendee Lee, or Faye in the English dub of Cowboy Bebop, voices Violetta, one of the villains. 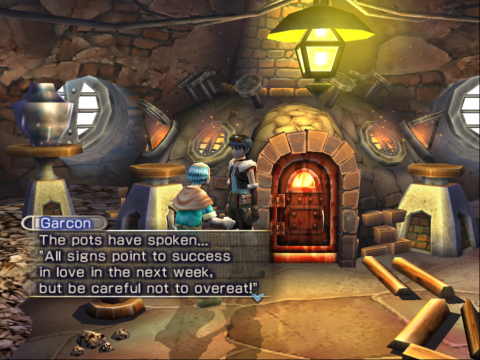 Grandia III has enough of Grandia to keep dedicated fans invested, but it’s also one of those instances of a later game in a series just showing up and not doing much else. This would have been the time to shake up the status quo, maybe even try to reinvent the series, understand what fans enjoy about Grandia and attempt to repackage it in a way that, while still true to the core, gives the players a new way to experience it. In other words, similar to what Wild Arms attempted after the third game. But instead we have a playable but underwhelming rehash of what made Grandia great, with an underbaked plot and cringeworthy humor that gets in the way of enjoying a great battle system.

Game Arts now appears to be giving Grandia the Lunar treatment by teaming up with GungHo Entertainment to remaster the games for modern systems without any promise of future entries.