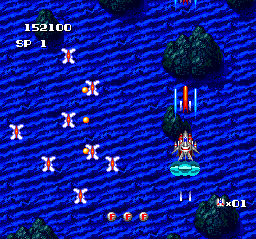 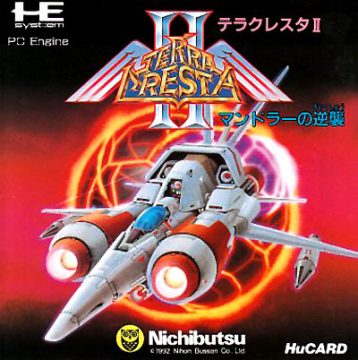 Terra Cresta returns, this time exclusively to the PC Engine. Japan’s favorite almost-16-bit game console and its CD-based cousin, the Turbo Duo, were home to dozens of fantastic shooters. This put Terra Cresta II in the uncomfortable position of having to prove itself as both a sequel to a game that was almost legendary in Japan and as a shoot ’em up in a library packed with overachievers. Worse yet, it had to do it all without the guidance of Terra Cresta‘s creator, Shigeki Fujiwara, who had defected to Hudson Soft to work on the Bomberman series. No pressure, right?

When all was said and done, Terra Cresta II: Mandora Strikes Back is a competent shooter. It doesn’t compare to the original Terra Cresta…or Blazing Lazers…or Gate of Thunder…or, uh, Air Zonk…but it ggets the job done. To its credit, it does offer several enhancements over the first Terra Cresta, including the option to create your own ship formations (a holdover from the NES port of the original game) and power-up capsules which add to your formation stock. Collect enough of these and you’ll be granted access to special formations, with your fleet of ships releasing homing phoenixes, laser beams, and other weapons of mass destruction. The game is so easy that you probably won’t need them, but it’s a nice touch. Also included are Star Soldier-style score attack time trial modes.

Special attention must be paid to the soundtrack, which is fantastic despite being on a PC Engine HuCard…or perhaps because of it. There are lots of catchy chiptunes which set the right mood for each stage. A remix of the main theme from the original game is even found later on. Craftier enemies and more memorable level designs would have helped too, but what’s here is good enough for fans starved for a sequel.