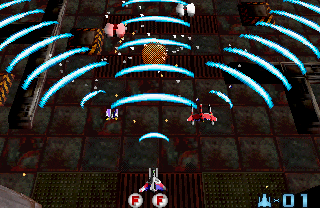 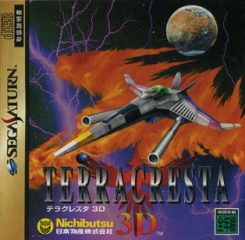 The video game industry went through sudden, profound changes in the mid 1990s. Many game companies, blindsided by the shift to polygonal graphics, scrambled to adapt, with varying degrees of success. Some popular franchises made a remarkably smooth transition to 3D, like Super Mario Bros., The Legend of Zelda, and Metal Gear, but many more suffered, either losing their identity or unable to make themselves relevant in the PlayStation age. Remakes of past classics like Frogger, Galaga, and Q*Bert were regarded as failures, losing their urgency to confusing new viewpoints and unnecessary play mechanics.

It would be easy to blame Terra Cresta 3D‘s shortcomings on the industry trends of the time, but there were other factors at play. Shigeki Fujiwara’s departure from Nichibutsu was certainly one of them. For years, he was the heart and soul of the company, and without him, Nichibutsu had struggled to make any worthwhile action games, 3D or otherwise. Instead, it devoted itself to arcade mahjong titles, which rewarded the player with images of faintly dressed, doe-eyed women. Considering its fixation on softcore pornography through the 1990s, it was a miracle that Nichibutsu made Terra Cresta 3D at all.

Getting to the game, Terra Cresta 3D is a disconcertingly watered down sequel to the original. Instead of the full fleet of five ships, you’re given just three: the Winger, Beta, and Gamma. Beta doubles your firepower, while Gamma gives you tailguns. There is no rear shield and no piercing beam, and no explanation for their absence. (Indifference seems as plausible a reason as any.) Using the formation button with one escort gives you a wave beam, while using it with two gives you three beams, filling the screen and exterminating foes the moment they appear. The phoenix is still here, but it only makes a brief appearance, flying past your ship while filling the screen with flaming tail feathers. As expected from the Sega Saturn, the phoenix is “enhanced” with an ugly pseudo-transparency effect that makes its arrival less welcome than the developers had hoped.

Generally speaking, the graphics aren’t impressive even by the Saturn’s modest standards, with ugly texture mapping, muddy colors, and uninspired character designs being the norm. There are also issues with the perspective – the camera is set too close to the action, making the game feel uncomfortably cramped. During boss encounters, the camera is set directly behind your ship, which leaves you with even less room to move and adds a lot of unwanted guesswork to dodging bullets. The silver lining is the soundtrack, full of bombastic orchestral reworkings of the themes from the original arcade game.

If the enthusiasm and creativity that went into the music had seeped into the rest of the game, Nichibutsu might have had something special. Indeed, outside of some racing games like Battle Round USA, and more mahjong titles, it was one of the last video games released by the company.