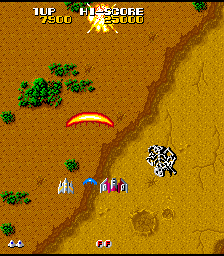 The year 1985 brought profound change to the world of video games. Technology was rapidly evolving, with the latest arcade titles either using more advanced 8-bit processors or stepping up to Motorola’s powerful 16-bit 68000. Developers took advantage of the cutting-edge hardware by broadening their horizons, and players reaped the benefits. Instead of being held captive by single screen playfields, they now had the freedom to explore their surroundings, admiring the lush scenery and uncovering hidden treasures scattered throughout each world. 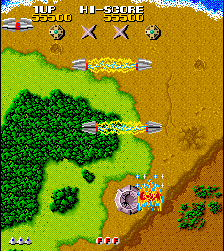 This change in scope turned the already popular Mario Bros. into the spectacularly successful Super Mario Bros., and it does wonders for the sequel to Moon Cresta. Terra Cresta takes the ship fusing play mechanics from the original game and sets them into the framework of an overhead view shooter, similar to Namco’s Xevious. Your already capable Winger can dock with four other ships to strengthen its firepower. Docking in Moon Cresta was a challenge, but in Terra Cresta, it’s as simple as blasting the protective domes surrounding each ship’s hangar, then flying into the craft to merge with it. Every ship is numbered, a la the British series Thunderbirds are Go!, and each has the following abilities:

1 (Alpha): This is the Winger, the fleet’s lead ship. It fires twin bullets in a straight trajectory –  it’s not much, but it’s just enough firepower to let you survive the relentless attacks of the Mandoran army. If an enemy attacks the Winger while it’s combined with other ships, those ships are destroyed and only the Winger remains. If the Winger collides with enemies or their bullets while unprotected, it explodes.

2 (Beta): As the name suggests, ship number two doubles the Winger’s firepower… along with its size! Fortunately, the ship will take a bullet for you, as well as cushion you from one collision.

3 (Gamma): Ship number three gives the Winger tail guns, letting it clear away foes lurking behind it. This also comes in handy for safely picking off those pesky cannons hiding behind barriers.

4 (Delta): The fourth ship gives the Winger a concussive beam which tears through smaller enemies and makes short work of bosses and the dinosaurs roaming the planet.

5 (Epsilon): The fifth ship generates a force field behind the Winger, protecting it from those sneaky enemies which strike from the bottom of the screen.

After you’ve collected at least one ship, you can tap the formation button to split the Winger into a fleet of fighters. Formations drastically increase your firepower and make you a smaller target, but if your Winger is clipped, the entire fleet explodes. Finally, formations are both temporary, lasting eight seconds, and finite. If you use the formation button three times, you won’t be able to use it again until you collect another ship and replenish your stock. Your firepower during a formation depends on the number of ships in your fleet. Here are the four available formations:

MOON FORMATION: Two ships fire a devastating wave beam. The crescents don’t offer much protection from the sides but rips through enemies directly in front of the Winger.

EXTEND FORMATION: Three ships fire in different directions, creating a deadly fan of bullets. It offers more coverage than the moon formation but the damage isn’t as intense.

CYCLONE FORMATION: Four ships release spinning blades which cut through foes. The blades are hard to aim but they work beautifully against those aggravating cannons set behind barriers.

CROSS FORMATION: All five ships lay down a spread of bullets which covers most of the screen. It’s not terribly exciting, but the best is yet to come!

Bringing all five ships together briefly turns the assembled flying fortress into a phoenix, which is both invulnerable to attack and deadly to the touch. The phoenix can only be summoned once each time you’ve collected the full phalanx of five ships, so make it count!

Moon Cresta was designed by a single person, Shigeki Fujiwara, but Terra Cresta was created by a team of programmers and artists, and the extra manpower pays huge dividends. What passed for graphics in Moon Cresta – abstract figures set against the inky blackness of space – has improved significantly, with the Winger flying over stretches of desert, vibrant grasslands, and vast seas which coat the surrounding beaches with seafoam. Thematically it’s not hugely different from Xevious, though there are some cool touches outside of the usual sci-fi aesthetics, like the dinosaur enemies. The sprites are still fairly non-descript, but have a metallic luster that stands in stark contrast to the garish colors of the first game.

The sound is also a highlight, at least in later versions of the game with the more advanced YM3526 sound chip. The soundtrack runs the gamut from adventurous to ominous, always fitting the current mood. Each of your Wingers is launched with a brief hopeful tune, which takes on a desperate edge when you’re down to your last life. (Keen ears will recognize this jingle as a remix of the opening theme from Moon Cresta!) Nichibutsu was so proud of musician Kenji Yoshida’s work that they sold the soundtrack on audio cassette in Japan, with bonus orchestral arrangements. 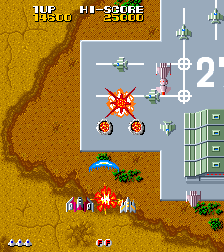 Terra Cresta took heavy inspiration from the science-fiction cartoons popular in Japan through the late 1970s and early 1980s, making the game massively popular in its native country. However, it was a more modest success in other territories. A competent Famicom version was released one year after the game debuted in arcades, but wasn’t available for the American Nintendo Entertainment System until 1990. Both versions let you design your own ship formations as a bonus, but the American game includes a revamped soundtrack that’s more full-bodied and less shrill than the one in the older Japanese release. An MSX2 port was planned, and almost finished, but never released. Released video footage seems to indicate it was roughly on par with the Famicom version.

Other ports of Terra Cresta were released for the Commodore 64, ZX Spectrum, and Sharp X68000 computers. The X68000 version of the game by Dempa/Micomsoft mirrors its arcade counterpart almost perfectly, suggesting that the code was ported directly to the powerful home computer. The Commodore 64 and ZX Spectrum games by Imagine Software were less successful, with the former suffering from chunky graphics and the latter having the color limitations expected from Britain’s budget computer. The Commodore 64 version does benefit from some excellent music courtesy of Martin Galway, at least. Finally, the game was released for the PlayStation 2 by Hamster Corporation, as part of its Oretachi Game Center Zoku series. Unsurprisingly, the game emulates the arcade hardware and matches it pixel for pixel. 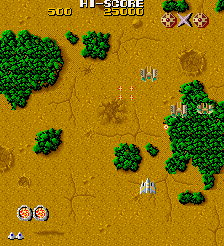 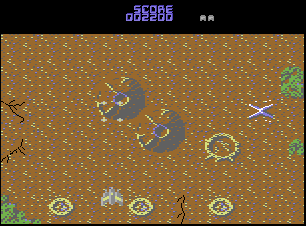