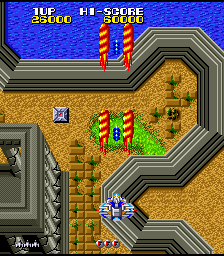 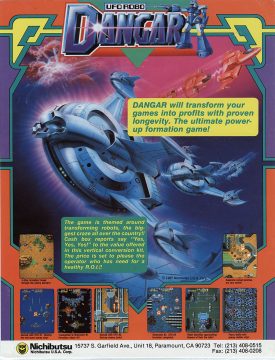 This spin-off of Terra Cresta fully embraced Japan’s giant robot culture, taking most of its cues from the animated series UFO Robo Grendizer and Danguard Ace. There are also similarities to Lightspeed Electroid Albegas, featuring three battle mechs which combine into one massive android. Albegas was planned as an entry in the popular Voltron franchise (Voltron of the Middle Universe), but only a line of Matchbox toys were released in the United States.

UFO Robo Dangar is similar to Terra Cresta in most respects, with the same look, sound, and play mechanics. Dangar even uses the same sound chip as later models of Terra Cresta, although the CPU takes a step down from the 16-bit 68000 to a more humble 8-bit Z80. You wouldn’t notice the step down at first glance, though. The graphics are every bit as detailed as they were in Terra Cresta and a bit more diverse, with highways spanning the sea and castles finding an unlikely home in the desert. 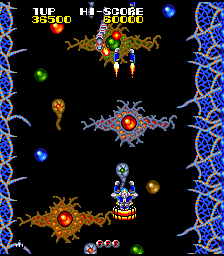 The big difference between UFO Robo Dangar and its predecessor is in the lead character. While the player starts with a single ship in Terra Cresta, UFO Robo Dangar gives them all three pieces of Dangar, assembled into a robot. A power up capsule gives Dangar a laser rifle, but especially skilled players can find flying saucers marked with green, red, and blue gems. Each saucer has a different pattern of fire, and they’re all pretty impressive by 1986 standards, filling the screen with hot death.

The game’s other distinguishing feature is that the player will occasionally discover black holes, leading to a creepy subterranean world with more difficult enemies. The only way to return to the relative safety of the surface is to gun down a heavily armored and especially aggressive boss, which covers the screen with a thick coat of bullets and missiles. It’s possible to bring down this dangerous foe… but not very likely.

UFO Robo Dangar wasn’t as successful as Terra Cresta in its native Japan, and went practically unnoticed in the United States, despite the popularity of giant robot shows like Voltron. However, the game is fondly remembered by those lucky enough to have played it.