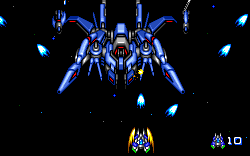 At first glance, Nexzr (pronounced “necks-zar”) appears to be just another Star Soldier clone. And visually, it is – you could place the game next to Blazing Lazers or Final Soldier, and have trouble seeing any real distinction. While the visual style is similar, and on the surface it seems to play the same, Nexzr is a much more polished experience. Though published by Naxat, it was developed by Kaneko and Inter State. These companies had worked with Hudson to develop Super Star Soldier and Star Parodier, which accounts for the similarity with those games. 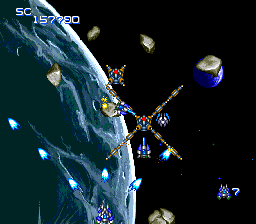 The first level does the best job of showing off Nexzr‘s strengths. It takes place in the middle of a massive galactic battle, as you see ships far off in the distance exchanging laser fire. You fight a few gigantic battleships, which is par for the course, but then a new one warps right into the middle of the screen with fancy raster effects, commonly seen in Genesis titles but relatively rare in PC Engine games. There are subtle details, like the fluidly animated explosions, or the animation of your homing fire weapon. Your ship enters and exits each stage by zooming into and out of the screen, mimicking scaling effects typically only seen in SNES games. 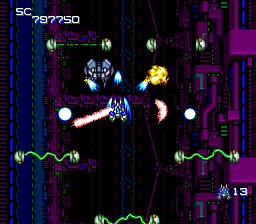 Many of the bosses start off with a simple attack pattern, then after taking enough damage, will connect to an even larger ship, and continue the assault with an altered but stronger approach, iterating on what you’ve already learned. There’s also a section in the middle of the third stage where your ship kicks into high gear and you need to dodge through a series of narrow tubes. This should be familiar to anyone who’s played Life Force, except partway through, you fight a midboss, as you attempt to hit it, dodge its fire, and keep from slamming into the walls. 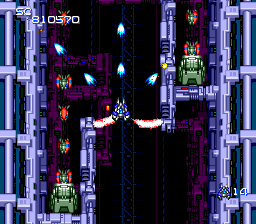 Most other PC Engine vertical shooters had some way to resurrect your ship instantly after getting killed. Not here – you’re sent back to a previous checkpoint after getting killed, ensuring that you really learn the levels. There are some cheap hits here and there, but it’s not as memorization heavy as Gradius or even R-Type. It’s a fairly difficult game, especially when dealing with the enemies that fire targeted suicide bullets when killed, but it is generous with extra lives. The difficulty levels in the options menu are labeled “Normal”, “Hard”, and (written in Japanese rather than English) “Hidee ze”, which means “So Cruel”.

The weaponry is rather restrained. There are two weapons attached to your ship – a standard weapon and a subweapon – both fired with a single button. There are no bombs or anything else of the sort. The standard weapons are the usual rapid fire forward shots and three-way beams, while the secondary weapons include homing fire weapons and automated satellites, which patrol around the screen and doggedly attack anything that comes close. There are also shields, though they only absorb a single hit. Some of the secondary weapons are underutilized, rarely showing up, though some are clearly much more powerful than others. 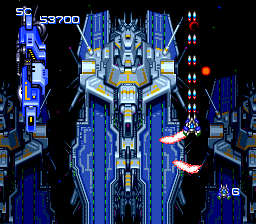 The music is typical of early ‘90s PC Engine shooters. It’s pure synth, and while not as flashy as something like Lords of Thunder, it’s catchy in its own right.

There are just a few cutscenes, detailing the story of the pilot Randy Scott and the death of his lover Silty Patriot, who is killed by a man named Hector in a red mecha suit. Most of the game is actually spent pursuing Hector in revenge, with the final stage being taken up entirely in a battle between your ship and the mecha. It’s understated and touchingly personal, considering that most big bad bosses are either gigantic battleships or nebulous aliens. 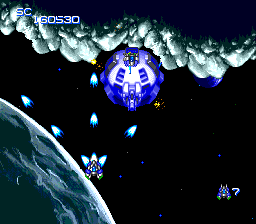 There’s also an “arcade” screen option, which is similar to the one hidden in Star Parodier. It runs the game in the TG16’s higher resolution (336×224) mode, putting black bars on the sides of the screen to replicate the feel of a vertical monitor, even though everything is just squished between them, as the playing field and all of the sprites are technically the same. 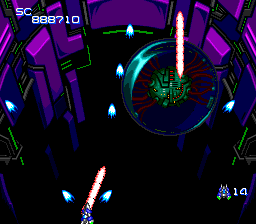 Nexzr may seem rather bland at first glance. It certainly could’ve used more varied graphics, more weaponry, and a stronger music style. There are numerous other shooters on the platform that are more distinct in all of these regards. But as far as pure, demanding, outer space shooters go, Nexzr is one of the finest, one that rightly earns its reputation as one of the best vertical shooters on the PC Engine. 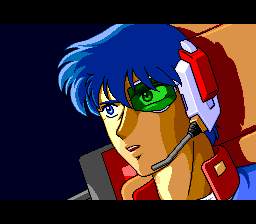 After its initial release, Nexzr was chosen to be the 1993 entry in the Summer Carnival shoot-em-up contest. With that, it was re-released as Nexzr Special. It features score and time attack modes, similar to what was found in the other PC Engine Summer Carnival games. While the entirety of the main game is included, the cutscenes have been removed. There were only a few to begin with – the intro and the scene right before the final boss – but they were remarkably effective, so they’re definitely missed. The Special version also has a worse cover, just some text on a white background. It’s less expensive than the original release, but there’s not enough new content to justify owning both unless you’re a completionist. 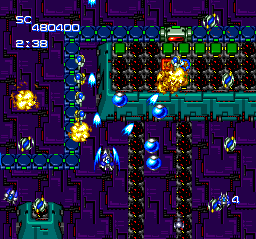