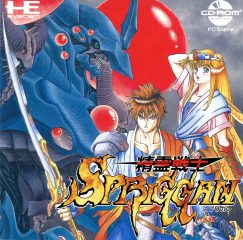 After their dalliance with the Sega Genesis with MUSHA, Compile returned to the PC Engine with their next shooter, Seirei Senshi Spriggan. (The Japanese part of the title means “elemental warrior“.) The development title was Seirei Senshi Aleste, but was changed a few times before release. Perhaps this was because Naxat, the publisher, wanted to create their own shooter brand, rather than continuing Compile’s. This is evidenced by the subsequent Spriggan games from the company. 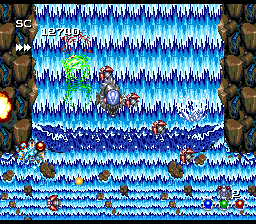 Spriggan shares the giant robot theme of MUSHA, but replaces the ancient Japanese setting with a medieval-like fantasy world, full of sprawling crystalline castles and gorgeous waterfalls. This vision is well-realized too, as the art design is amazingly gorgeous. The game starts off colorful but gets darker as you fly through the veins of a tree, into an insect-infested hive, and over a castle filled with lava. The last few chapters go full science fiction, as you fly through outer space, and fight against a mechanized dragon, amongst other robot/biological hybrids.

The mecha actually has two pilots: Jega, the guy, and Rikart, his lady companion. They pilot the Spriggan to protect their floating island country from the evil Buraizubara empire. As expected from a CD game, there are brief cutscenes for the intro, mid-game, and ending. 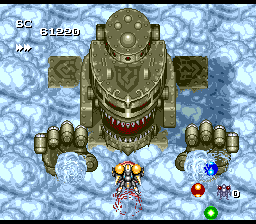 A “spriggan“ is a creature from Cornish lore, which has little to do with the actual game, but the “elemental“ title refers to the game’s weaponry system. There are four types of orbs dropped by enemies, each a different color and corresponding to fire, water, earth, and wind. You can hold up to three orbs at once, and your weapon is determined by the combination of colors. Red orbs are focused on fire, which tend to be strong, forward firing shots; blue is for water, which either rotate around your ship or otherwise fire spinning projectiles; yellow is for earth, which sends out multi-way shots; and green is for wind, which sends powerful waves out. The Arm configurations for MUSHA are gone, and the standard forward-firing cannon is only used when you don’t have any orbs.

You can sacrifice orbs to use as a bomb, and there are also flashing orbs, which not only destroy everything on the screen when captured, but also grant you a shield. Since picking up a new orb will simply cause the oldest orb to disappear, this means it’s to your advantage to drop a bomb right before you pick up another one. And orbs are plentiful, even dropping in during boss fights, which in turn means lots of potential bombs. 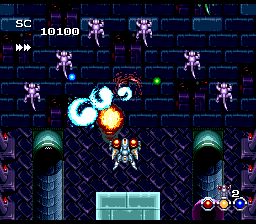 On the flip side, it’s hard to determine which kind of weapon you’ll end up with. In previous Compile games, once you memorized which numbers went with which weapons, you could adjust your strategy accordingly, but it’s hard to know that, for example, if you pick up “earth-wind-water“, that you’ll get a homing attack.

Sometimes your comrades in green mecha suits will fly into the fray to help you out. This is kinda cool, as it gives you the impression that you’re not the only soldier fighting a war, but it’s not really used often enough. If you have a multi-tap, you can actually control them with extra controllers for the brief period of time that they pop up, which is a cool Easter egg.

Spriggan holds up solidly compared to its predecessors, except for its soundtrack. After the intense heavy metal fest of MUSHA, the score returns to the type of synth typical of early ‘90s CD-ROM based shooters. That’s not necessarily a bad thing, but the tracks are lacking in both intensity and catchy melodies. One of the tracks later in the game was composed by Toshiaki Sakoda, which sounds the closest to his work on MUSHA, but it sounds relatively weak on the synthesizer used here.

Spriggan was also developed to be the first entry in Naxat’s Summer Carnival series, a rival of Hudson’s All-Japan Caravan contest. As with their other games, there’s a special score attack mode with a unique level. 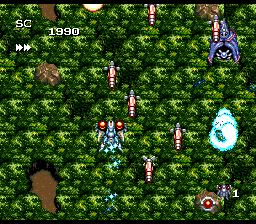 The default difficulty level is not too hard – even though a single hit kills you, you’re resurrected immediately where you died, and the constant bombs make things easier too. The higher difficulty adds more challenge. But still, this is one of the highlights of Compile’s library, and one of the best shooters on the PC Engine.

Subsequent Spriggan games keep the mecha theme but change the setting completely. However, in the mid-1990s, some of Compile’s shoot-em-up staff left the company to work with Raizing, where they developed the Mahou Daisakusen games, which have a similar fantasy setting. 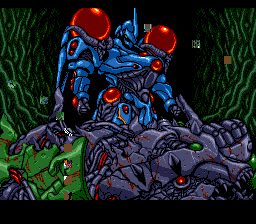 A super deformed version of the Spriggan mecha also shows up as an enemy in the Madou Monogatari ARS (below), part of the first person dungeon crawler RPG series, whose characters later starred in the company’s famous Puyo Puyo puzzle game series.