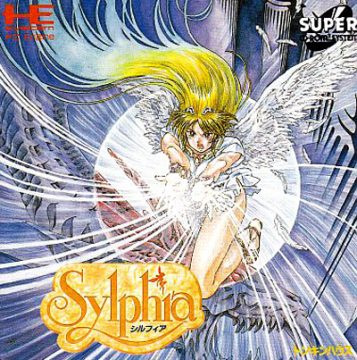 Sylphia is a far cry from the flying spaceships and mecha of Compile’s other titles. Taking place in a world inspired by Greek mythology, the introduction shows a young woman’s final stand against a horde of invading monsters. Her name is Silphia (yes, different from the title). As she lays dying, a force resurrects her as a fairy, giving her a second chance against the forces of evil.

Sylphia was published by Tonkinhouse, and technically Compile’s name is never mentioned anywhere. However, its credits indicate that many of their staff members worked on it. Takayuki Hirono is listed as the “Game System Adviser”, and several programmers and artists, including Kouji “Janus” Teramoto are part of Compile’s regular staff. So it was definitely subcontracted to them, either in part or in full. It’s also the last shooter developed by them until 2001’s Zanac x Zanac. 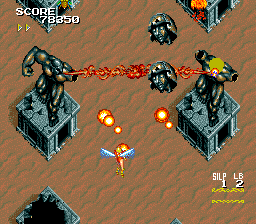 Even without its logo on the title screen or knowing the names of the developers, Sylphia plays very much like a Compile shooter. There are four weapons, each based on the four classical elements, which are strengthened by either collecting the same element as you have equipped, or by grabbing power chips. Many of these should seem familiar – fire is mostly homing attacks, wind has spread attacks, water is multi-directional, and earth surrounds you with rocks. You’re also equipped with a super beam attack – you use this once with every life, but it can be recharged by grabbing white crystals. It’s also not too difficult – you can take three hits before getting killed, you only lose weapon strength if you die, and both health restoratives and extra lives are plentiful.

Sylphia’s strengths lie mostly in its graphics. From a technical standpoint it’s nothing impressive, but the Greek setting is rare among shooters, outside of Namco’s Phelios. Standard enemies include shield-bearing foot soldiers and harpies; turrets shoot out spears rather than missiles. The levels are varied, often changing tilesets midway through the stage, so the long stages are a little less repetitive than Compile’s other games. The music is pretty solid too, with slow, catchy beats interspersed with classical elements, accompanied by synthesized flutes and piano. Some of the contributors include Keiji Takeuchi, who also did Spriggan Mark 2, and Satoshi Shimazaki, who worked on Robo Aleste. 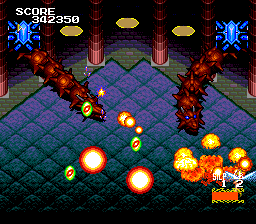 The highpoint are the boss battles, primarily based on mythological foes, like Minotaur and Medusa. Some of the fights are a little simple, with easily defeated patterns, but at least they’re kinda cool in design, like when you ascend a tower and fight a Chimera that leaps upward between the steps. There’s an enemy that seems to be a combination of Cerberus and an arachnid, with each of the monster’s legs consisting of a rabid head. Then there’s actually Cerberus, who fires a flame shot that engulfs half of the screen. The final boss is one of Compile’s best, consisting of multiple nightmarish faces spewing hellfire.

The game’s cutscenes are oddly restrained – there’s no dialogue, voice acting, or text, with the intro and ending told only through barely animated pictures. Each completed level only shows a small scene of the heroine fighting the level’s monster, as if it was an ancient carving. There are other small details like this, such as the Game Over screen – Silphia hovers over a coffin, and your choice to continue will either send her flying back into the sky, or lock her in for an eternal sleep. 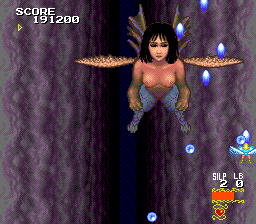 Sylphia is one of the most expensive games on the PC Engine, rivaled only by Hudson’s Sapphire. It’s probably not due to any extraordinary quality though – it’s a pretty good game, but there’s not much else that stands out about it. It lacks the fierce bombast of MUSHA and the weapon variety of Space Megaforce. And the visuals, while decent, really aren’t as detailed nor as imaginative as Spriggan. It’s perfectly comfortable as a mid-tier 16-bit shooter.