Darius Force (known as Super Nova in the West) might be one of the series’ lesser-known titles, but it’s a unique little shooter that sticks to the basics of the genre, while doing several things differently from the norm.

Right from the start, the game offers you three different variations of the Silver Hawk for you to choose from, with each one being equipped with its own set of bullets, missiles, and multi-directional lasers. You won’t be seeing your weapons at full power anytime soon, though, since the game takes you back to a checkpoint with no power-ups every time you die, much like the original arcade Darius (thankfully, increasing your power levels now isn’t as hard as it was in that game). Also tied to Darius Force‘s power-up system is the fact that, when used simultaneously, your main and secondary weapons are shot at half power each, thus making you think which aspect of your arsenal – range or firepower – to prioritize at all times (it doesn’t help that now you have to switch between your ship’s two secondary weapon types using the R button). This game also marks the first appearance of the series’ iconic giant laser beams in the form of an extremely rare power-up that grants you a single-use, screen-long laser once obtained. 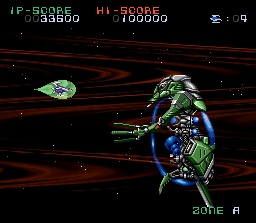 The graphics and sound are  improved over Darius Twin, while having the darker, grittier style that many shooters were adopting around the mid-90s. The story is told on an eerily silent intro composed of text, “archival footage” of some of the original Darius‘s most iconic moments, then sudden bursts of static and bubbles that transition into a simple title screen backed only by the creepy sound of heartbeats.

Thankfully, Darius Force‘s presentation isn’t as simplistic as it seems to be at first, with the game making some interesting uses of the SNES’s graphical effects. Zone J, with its rotating stage layout (a la R-Type III) and chameleon boss (one of the few non-marine-critter-inspired enemies in the series!), works as a particularly great showcase of the system’s rotation and transparency capabilities, with a few stages also having some impressive multi-layered backgrounds and diagonal scrolling being applied to them.

This game’s soundtrack marks Zuntata’s departure from the peppy, upbeat tunes that marked its early career to the moodier, almost dreamlike compositions that made its later works famous. However, its frequent repetition and bland instrumentation make it rather dull overall.

Darius Force feels more like a Gradius or R-Type game at times, but it’s still very much its own thing. As a cool bonus for Taito fans, though, a few of the enemies, like the final boss Zandick II, are from Syvalion.