Darius II is not significantly different from its predecessor, but it is a large refinement. The biggest noticeable change is that all of the sprites are much larger, giving the game a more “zoomed-in” look. In addition to a three-screen release, there is also a (more common) two-screen version.

The weapon system has changed – instead of shooting colored enemies to release orbs, you need to destroy specific waves of enemies. There’s also a new weapon, the laser, which fires vertically. (This was integrated into the other weapons in later Darius games). Your main weapon isn’t quite as weak, and upgrades quicker than before, though you still lose power when killed. The checkpoints are gone, too, so you resurrect right where you left off.

Rather than navigating your ship through a fork in the stage at the end of each level, there’s now a map that breaks out your route through the game. All of the stages are based around our solar system, despite not actually taking place on Earth. Instead, it takes place hundreds of years after the events of the original Darius, as the remaining populace of the planet settled far away on a world called Olga, only to incur the wrath of the Belsar empire once again. The pilots this time are Proco Jr. and Tiat Young, descendants of the heroes from the first game.

The stages are a little bit more interesting this time – the first level begins on the Sun, complete with solar flares, undoubtedly inspired by similar levels in Salamander and Gradius II. Another stage is heavily based on the works of H. R. Giger. In both versions of the second stage, you fight against a gigantic robotic fish, then enter into its mouth to face another boss inside of it. One of the coolest enemies is a giant hermit crab, who wears the World War II Yamato battleship as its shell. Many of the bosses from the original Darius also show up in miniaturized form as minibosses, now known as “captains”.

The game also has more of a personality. The opening stage begins with a voiced narration of the pilot reading off various indicators, before proclaiming “I’ve always wanted a thing called tuna sashimi!” as a battle cry. The endings are even weirder – there’s one where your pilot gets woken up by his mother – it turns out the game was just all a dream before he goes off to school. The darkest one is where the heroes return to their planet, only to find that thousands of years have passed in their absence due to time relativity, and everything they were fighting for has died off.

For some unknown reason, Darius II was renamed Sagaia outside of Japan. The Genesis port was developed by Natsume and is quite good. The sprites have been scaled down slightly to fit a standard TV screen, and the visuals are darker, but it still looks decent. The music is well done too, though the “tuna sashimi” voice bit is gone. Some of the bosses have been changed around and there’s a mode to play all of the stages in one go, though two-player mode is sadly missing.

Sagaia also made it to the Sega Master System in Europe and Brazil, again, courtesy of Natsume. It’s a magnificent port that looks amazing for an 8-bit system. The only real knock against it is that several levels had to be cut to fit it into such a small cartridge – there are only 12 in total. 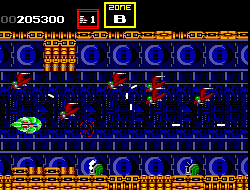 The PC Engine Super CD port, called Super Darius II, was developed by A-Wave and published by NEC Avenue. Unlike the Genesis version, the sprites are about the same size as the arcade game, which makes the playing field a little cramped. Some of the graphical effects haven’t made the transition, but otherwise it’s much more colorful than the Sega version. Many of the bosses are completely different, some having been taken from Super Darius. There are a few difficulty modes – in the easiest one, your weapons don’t power down after dying. However, far and away the biggest advantage is the soundtrack. Rather than the usual Zuntata weirdness, Super Darius II is full of rocking, guitar-driven music that flat out rules. Some of the arrangements are so drastic though that it’s hard to pick out the base of the original song. This was released on the Wii Virtual Console. 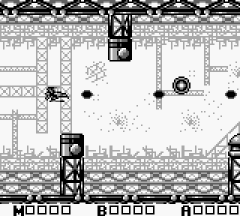 The Game Boy version – known as Sagaia even in Japan – isn’t technically a port, but rather a mostly-new game with new levels, featuring bosses and music from the first two Darius games, along with a brand new boss, based on a sunfish. The ability to have up to nine lives is nice, as well as the auto-fire option. It uses the power-up system of the original Darius, but requires fewer power-ups to upgrade, plus there’s instant respawn. There’s no level branching, though there are eight stages in total, including a boss rush at the end. For an early Game Boy shooter, it’s quite good, featuring some nice parallax scrolling, decent chiptune renditions of Zuntata music, faithfully replicated boss fights – they’re better than Darius R on the GBA – and it runs very smoothly. One of the better shooters on the system.

Darius II was also ported to the Saturn in 1996, and came out in both Japan and Europe. It’s mostly arcade perfect, and replicates the two-screen version of the arcade game, presented in widescreen. You can zoom in and out with the triggers, though when zoomed in, it uses awkward “wobble” scrolling. It also offers a rapid fire option that makes your default weapon much more powerful. Unfortunately, it eschews the awesome PC Engine CD version soundtrack, and instead uses the original music (as redbook audio on the CD, no less).

The PS2 version is featured on Taito Memories II Joukan. It includes the two-screen version, available in letterboxed 8:3 or squished 4:3, and is otherwise a straight emulation with no enhancements. 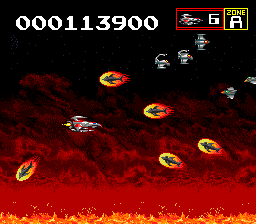 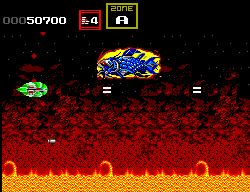