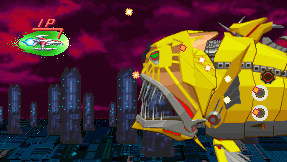 Despite arguably kicking off the golden age of gaming in 1978 with Space Invaders, Taito’s own golden age didn’t begin until much later, with the 1993 release of the F3 arcade board, whose powerful hardware, affordable interchangeable cartridges, and great library of fresh games wowed audiences all over the globe. This prompted the company to greenlight the development of a new Darius game, intended not only to show off the system’s awesome capabilities, but also to up the ante of their old franchise, which had not seen an arcade entry in six years. And up the franchise’s ante they did, with Darius Gaiden being widely regarded as the point where the series grew its figurative beard and became a respectable (if flashy) franchise of its own. 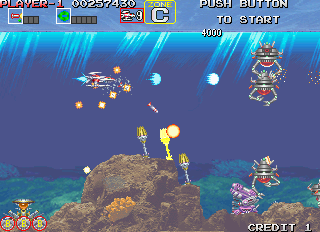 While the early Darius games relied entirely on their gimmicks – both technologically and aesthetically – to overcome their average level design and pacing, Darius Gaiden manages to combine the series’ trademark charm with great and mostly-fair gameplay. The level designs are much more varied and interesting, and you get screen-clearing bombs, too. There’s also a cool new ability – each level’s unique miniboss can now be captured and converted into a powerful Option. This is accomplished by destroying and grabbing its small and well-guarded, orb-like weak points, letting players lay waste to enemy forces as long as their newfound ally survives.

All of these cool new additions, and the inclusion of a more balanced power-up system (where only your main weapon goes down a level when dying, with the ship’s missiles and shield staying the same even after using a continue) may make Darius Gaiden sound a tad too easy on paper.  Don’t be fooled by your Silver Hawk’s enormous firepower, though – the game is just as hard as previous entries, if not harder. Enemy formations tend to zoom by in all directions, flooding the screen with all sorts of projectiles and requiring the player to expertly dodge them while taking into consideration each level’s unique obstacles and terrain, all the while keeping the game’s internal rank in tow and finding hidden power-ups and extra lives throughout each stage. The game becomes thick with bullets rather quickly if rank isn’t managed expertly, thus making every Zone not only a test of reflexes, but also of decision-making, with every power-up collected, life lost, bomb used, and shot fired adding up to the game’s internal difficulty counter. 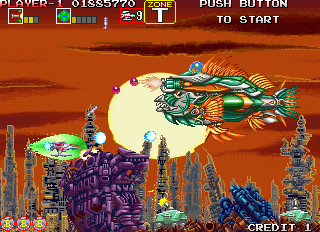 Darius Gaiden‘s presentation is one of the best ever seen in a shooter. In fact, it’s so good that almost every side-scrolling shooter made after its release takes a page or two from it – be it the colorful, dream-like environments, the detailed graphics, the massive bosses (with many old ones given incredibly cool looking overhauls), or the beautifully thick bullet patterns. It has one of the coolest bomb explosions ever seen in a shooter, which creates a black hole that not only flashes in psychedelic colors but sucks almost everything into its powerful void. The boss explosions are just as screen-shatteringly epic.

These elements combine with Zuntata’s hauntingly beautiful and creepy-yet-energetic score. This includes the oft-covered main theme “VISIONNERZ” (with creepy whispers suggesting you to “close your eyes”) and the “Get Ready for This”inspired “FAKE”, making for a game that is not only a great shoot-em-up, but also one of the finest audiovisual experiences in any 2D arcade game. 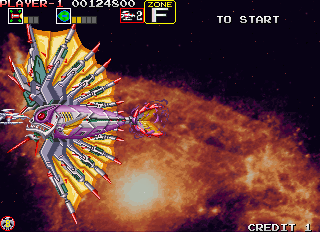 Darius Gaiden was a commercial and critical success at the time, receiving ports for the PS1, Saturn (courtesy of the infamous Acclaim Games, like all other Taito games released for the console on the US), PC, and being included on the Taito Memories Gekan/Taito Legends 2 compilation for the PS2, PC, and Xbox. The PS1 and Saturn versions of the game are pretty barebones, yet arcade-perfect except for some slowdown here and there (a bit more prevalent on the PS1 version). The PlayStation version has a CGI rendered intro, but in typical fashion, it isn’t very good (and also quite short). The PS2 release regrettably has even more slowdown, and runs in filtered 480i rather than the 240p of the other console ports. The PC version, which was developed and published by the same folks who gave us the great PC version of Raiden II, has some strange graphical differences, like the use of ugly meshes for shadows and transparencies instead of the traditional alpha blending; otherwise, it’s a respectable port. 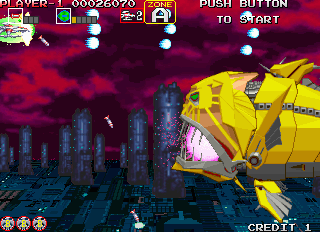 Available on MAME’s long list of special board revisions is Darius Gaiden Extra Version. This remix offers a new challenge and rearranges each stage’s location on the progression grid, often putting crazy-hard levels where easy ones should be, while also removing the cap on the number of bombs and increasing your default rate of fire. There’s also a mode to play all of the levels one after another. Unfortunately, it was never ported.