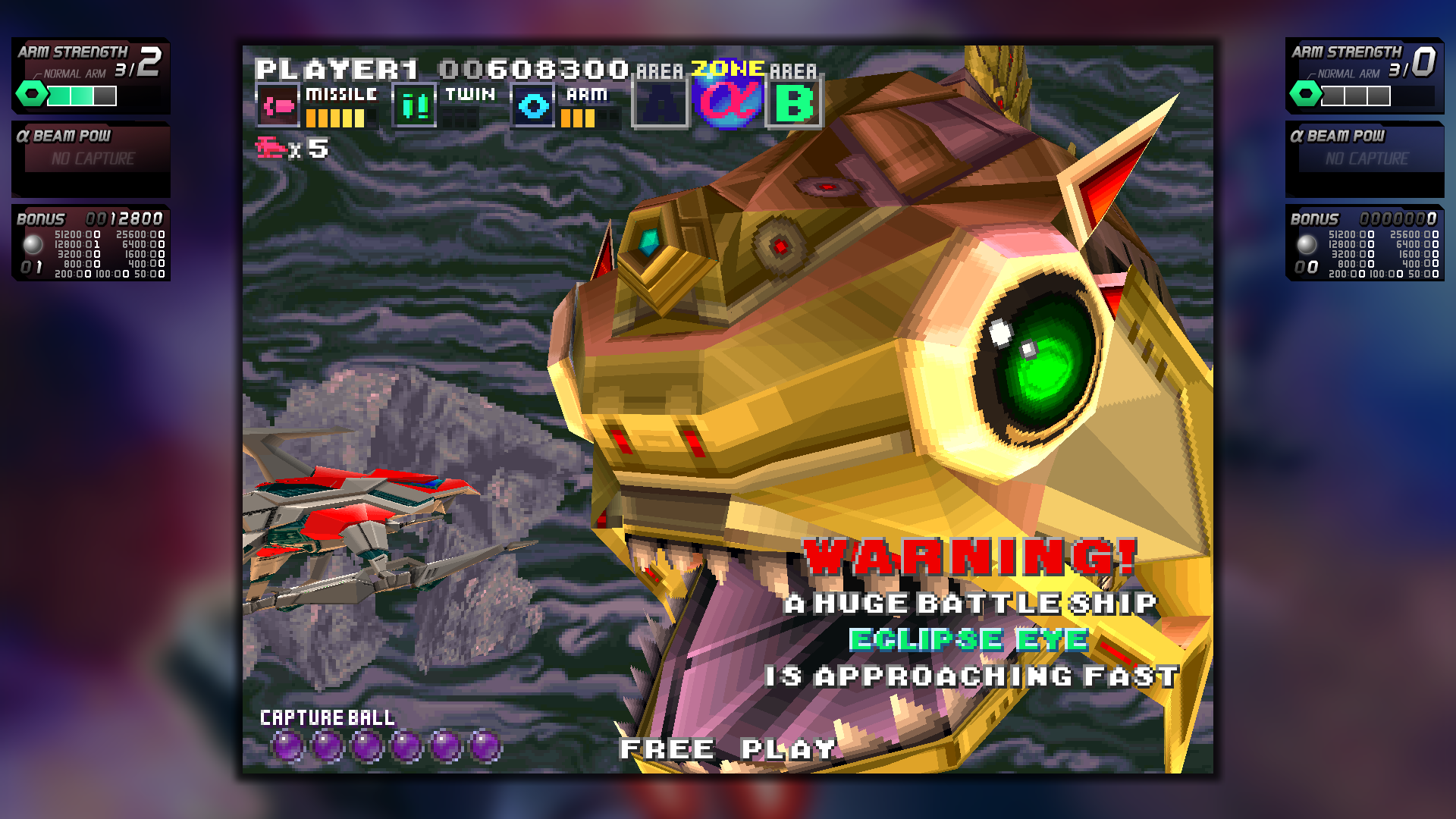 The transition to 3D graphics presented itself as a massive roadblock to the side-scrolling shoot-em-up genre, which had 2D gameplay as an essential part of its DNA. Knowing this, most big games in the genre released around that time took a 2.5D approach to graphics while keeping their old-school gameplay intact, which often resulted in bland-looking and boring titles, which failed to grab arcade-goers’ attention like their predecessors had. G-Darius, however, is an exception to this rule, being not only a great and pretty-looking game, but also an incredible example of 2.5D graphics done right. 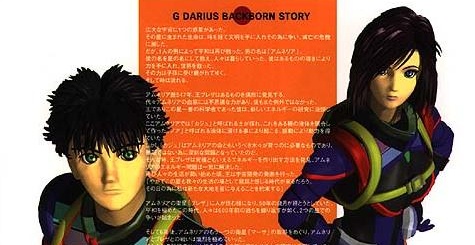 In a twist of the usual Darius formula, G-Darius doesn’t star the latest members of the Proco and Tiat dynasties, instead putting Sameluck Raida and Lutia Feen, two young pilots who work for the Amnelian Air Force, in the seats of the red and blue Genesis Silver Hawks, respectively. This is explained by the game’s backstory, which reveals that, eons before the Darians’ eternal war against Belsar began, their predecessors, the once-peaceful Kingdom of Amnelia and the ruthless Thiima Empire, were already in conflict. The former was almost succumbing to the latter’s army of huge living battleships when its king had the brilliant idea of stealing and reverse-engineering the evil fish-ships’ Beta Beam technology, and using it to create their own small and highly versatile spaceships, thus giving birth to the series’ iconic Silver Hawk in a fashion similar to Metal Black‘s Black Fly or R-Type‘s R-9. 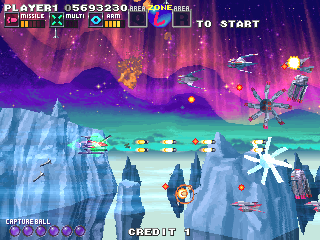 G-Darius abandons Darius Gaiden‘s black hole bombs in favor of Capture Balls, which, as their name implies, allow players to turn the odds to their favor by making almost any enemy their temporary ally with the push of a button, with each enemy type having their own behavior when under the player’s control and with minibosses having special commands which can be triggered by simple controller inputs. Unlike Darius Gaiden‘s miniboss Options, captured enemies often stay a long time by the player’s side, with their sacrifices being what powers the Genesis Silver Hawk’s trademark Alpha Beams. These can counter bosses’ Beta Beams in beam duels/button-mashing contests of epic proportions, an aspect borrowed from Metal Black.

All of this is also vital to the game’s fancy new scoring system, which keeps track of how many enemies you’ve captured, how many formations you’ve destroyed with your beams, and how many Beta Beams you’ve countered both individually and simultaneously (certain bosses can use up to a whopping four Beta Beams at the same time, with a successful counter requiring faster button mashing the more beams are countered simultaneously), awarding massive point bonuses and score multipliers based on these stats and ranking players based on their final score at the end of a game. 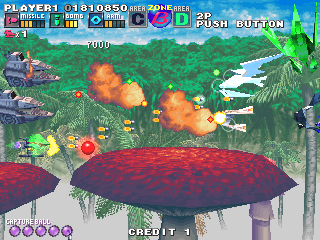 It is implied that the “G” in the game’s title has more than one meaning, what with all of the stages’ names beginning with the letter G and with this game’s Silver Hawk model being dubbed the Genesis. However, it could also refer to the game’s gigantic bosses. Eye-catching boss battles have always been a trademark of the Darius series ever since its creation, but G-Darius manages to single-handedly trump all of its predecessors and most other shooters in this department with its epic, cinematic encounters against screen-filling polygonal monstrosities. Each boss has its own unique introduction cutscene which plays as the series’ iconic pre-battle wail sounds off, with them more often than not managing to inflict feelings of fear and anticipation of what’s to come on the player. The battles themselves are no joke either, with players often having to dodge thick bullet patterns while simultaneously capturing enemies, countering Beta Beams, and destroying the bosses piece-by-piece, with new, stronger attacks being introduced to their patterns with each fragment destroyed.

The boss battles, as epic as they are, are just one of the many things that make G-Darius‘ presentation stand out among shooters, though. Darius Gaiden‘s colorful-yet-static stage backgrounds were already a big improvement over its predecessors’ boring starfields, generic mechanical bases, and murky caves, but G-Darius‘s are always bursting to the seams with energy and detail, be it the crowded underwater tunnels of Green Globe, or Granulated Star’s menacing enemy mothership, whose laser-powered, planet-destroying insides you eventually get to explore (and escape from) mid-stage. The quality of the level design has also increased substantially, with every stage now having a fork on the middle which defines how their second half and boss battle will play out, in exchange for the game’s shortened overall length (each run is five stages, with 15 total). 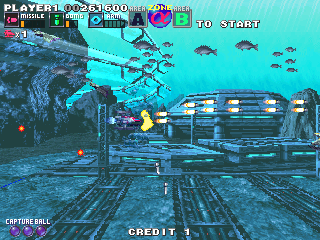 The game’s soundtrack is comprised of heavily experimental electronic tunes that manage to create an atmosphere of simultaneous tension, dread, and awe via the clever use of a wide variety of samples, synth instruments, and ambient sounds. One of the standout tracks is “ADAM”, which gets used on the game’s most intense battles and the console versions’ CG intro.

Altogether, the incredible visuals and varied level design put G-Darius next to Darius Gaiden as one of the best of the series.

G-Darius was ported to the PS1 and PC, with the former being published by the then-small THQ. The PS1 version looks nearly arcade-perfect (the FX-1B arcade board is similar to the PS1 hardware), with the most notable difference between it and the arcade being the addition of Beginner and Boss Battle modes. However, there’s quite a bit of slowdown, and the music cuts out in the middle of the stage during the branching paths, and sometimes doesn’t even resume, leaving just sound effects. Also, the cutscenes are now full motion video rather than rendered in the game engine. The PS2 version of the Taito Legends 2/Taito Memories Joukan compilation runs much more smoothly than the PS1 version, though it still uses FMV for the cutscenes. 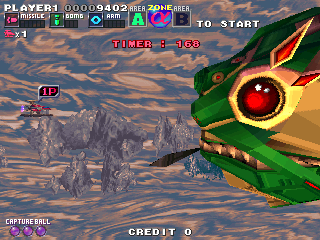 G-Darius HD, released in 2020 for the PlayStation 4 and Switch and developed by M2, is the best port, and basically arcade perfect. It includes an HD mode with an upgraded player ship 3D model, though the rest of the visuals haven’t been changed beyond running at a higher resolution. It looks nice but maintains the same 4:3 as the original game; an original mode is available to run it in lower resolution, to keep those polygonal jaggies. Assorted gadgets indicating gameplay stats have been introduced, like showing your captured ship, and the game keeps a log of everything you’ve captured. G. Darius Ver. 2, a previously arcade-only revision that makes assorted balances tweaks and includes a Beginner mode, full auto-fire, and boss timers, will been ported for the first time and is scheduled to be added as DLC. 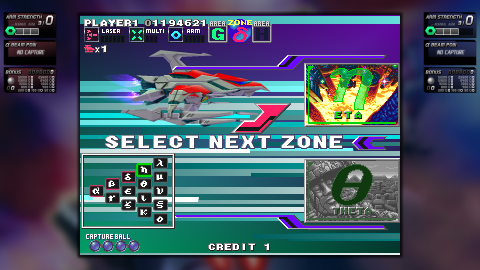 The endings in G-Darius are even weirder than the previous ones. The best? The two ships are destroyed, as the pilots drift in some bizarre void. As they float toward each other, they begin to disintegrate… and as their lips touch, there is absolutely nothing left of them. It’s the creepiest thing in ANY video game, and is actually weirder than the ending where they change into a bird. 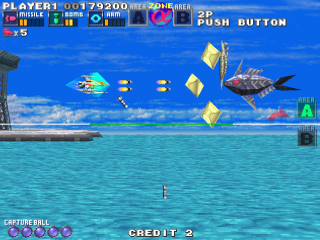 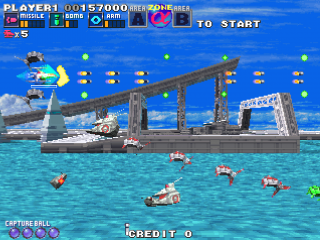