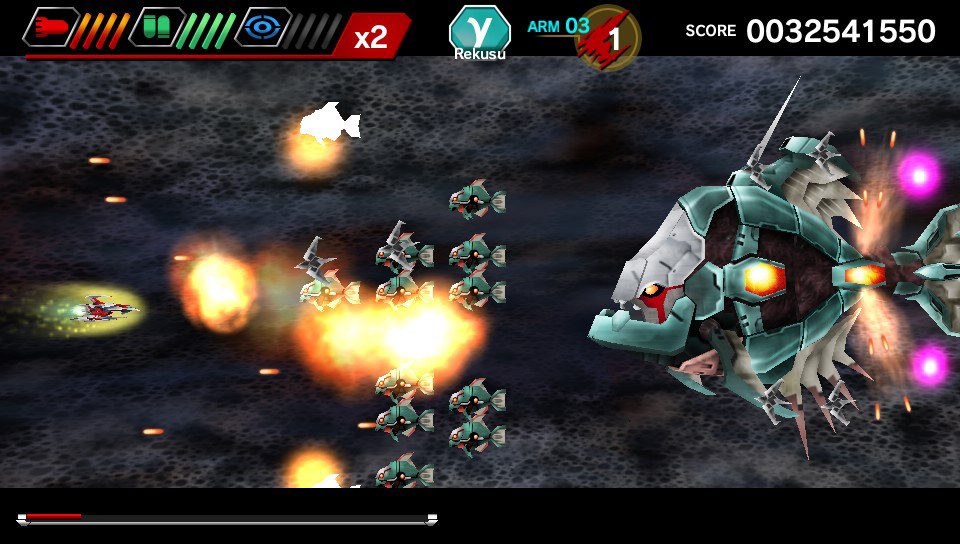 The history of DariusBurst is rather complicated. It began as a PSP game released in 2009, which was developed by Pyramid. This was then used as a basis for an arcade release in 2010, DariusBurst Another Chronicle, though in spite of sharing levels and many assets, it’s largely a new and different game. The PSP version was then ported to iOS and Android in 2012 under the name DariusBurst Second Prologue, which adds in some of the enemies and ships from the arcade release. Finally, the arcade version was ported to PC, PS4, and Vita in 2015, under the name DariusBurst Chronicle Saviours.

Chronologically, Burst is the last game in the series. The two heroes this time are Ti2 and Riga Practica, with three variations on the Silver Hawk – Legend, Next, and Origin. Other than the different ships, the original PSP release is relatively threadbare compared to previous Darius titles. There are only 11 stages, and various gameplay systems have been removed – you can no longer capture mid-bosses, nor are there any mid-level branching paths. Though the game utilizes 2.5D visuals, the style is much blander than the colorful, trippy stages of G-Darius or Darius Gaiden, consisting mostly of outer space areas, underwater stages, and assorted bases. 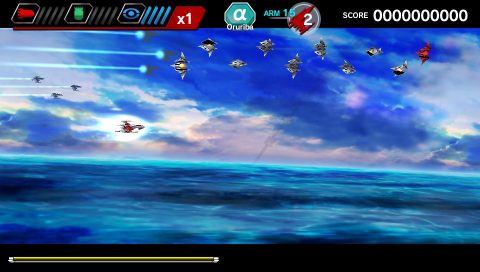 It does, however, expand on the laser beam mechanics of previous games. There are two uses for the “Burst” laser. You can fire it directly, which can be used to counter against boss laser beams. The timing of this is much harsher than it used to be – you need to fire at the right moment, or else it won’t work. Alternatively, you can also drop the laser as a separate pod, and then change the angle of fire at your will. Since the laser recharges when either destroying enemies or absorbing certain types of fire, if you position and time it correctly, you can create a laser which regenerates at the same time as it fires, allowing it to become temporarily self-sustaining, at least until you deactivate it or you run out of targets.

In addition to the standard Arcade mode, there’s also Burst Mode, an extra difficulty mode which includes different enemy arrangements, eliminates weapon power-ups (but lets you switch between missiles, lasers, and wave weapons), gives you only one life, and removes the ability to continue. Mission Mode gives a number of specific challenges to conquer, requiring you to beat various combinations of levels and bosses, which also must be completed in a single life. 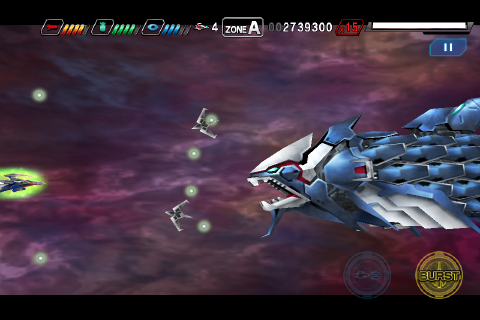 The iOS/Android port, Second Prologue, features touch controls where you drag your ship with your finger, like other mobile shoot-em-ups. It runs at a higher resolution than the PSP version, so it looks a bit nicer. The highlight of this version is the SP Mode, which alters the levels from the PSP version with different enemies (many taken from the arcade version) and different color schemes. The Original Mode is closer to the PSP version, but it, too, features some extra bosses from the arcade release. It also adds a new ship, the Assault.

In its portable releases, Darius Burst is fine, but also unambitious. It’s better than other original PSP shooters, but when the competition consists of crud like Cho Aniki Zero and Sengoku Cannon, that’s not exactly high praise. However, subsequent releases really polished it up. 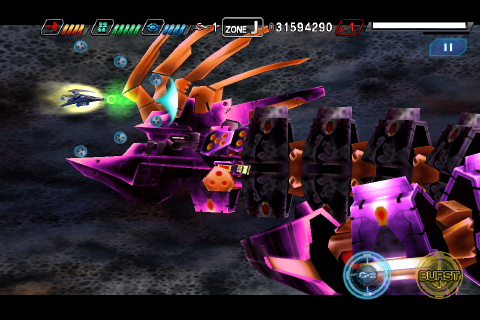 The arcade release, Another Chronicle, takes after the super-wide playfield of the original two Darius arcade games. It uses two HD monitors positioned next to each other, creating one big 32:9 view (compared to the 16:9 ratio of the PSP version). It also supports four players at once, and the enclosed sit-down cabinet includes one large bench to allow enough room for everyone to sit next to each other.

Additionally, to make up for all of this extra screen real estate, the enemy patterns have been completely redesigned. They’re much, much denser, with the screen occasionally flooded with hundreds of enemies at once. This not only creates more scoring opportunities, but makes the stages feel much less empty than they used to. The bosses also look much larger and more impressive on the gigantic screen than they did in their portable iterations.

This version features a total of eight ships, many of which are based on versions of the Silver Hawk from previous games. Most of them play similarly, with variations on how the burst laser works, with some having more relaxed timing requirements to counter the bosses’ lasers. Some of them don’t have lasers at all, but features Darius Gaiden-style bombs, instead. It’s also the first Darius game where you can manually turn around – before, this happened automatically, and only in certain boss battles. 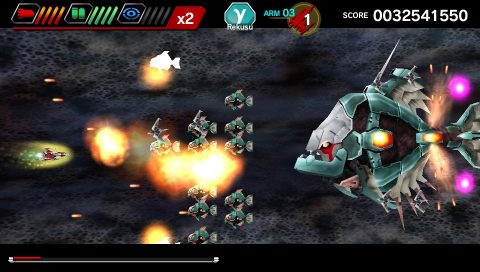 In the Original Mode, you only play three stages out of a possible 12, with five different endings. The Original Ex mode, which was added with an arcade revision, includes expert level variations on all of these stages.

Particularly innovative is the Chronicle Mode. An expansion of the Mission Mode features in the PSP/mobile versions, it features thousands of challenges, with assorted levels and bosses mixed and matched in various permutations. Many levels must be undertaken under specific conditions – i.e. using a certain ship or with a certain number of players. Once you beat a challenge, it saves progress to the arcade cabinet, allowing other players more options. The idea is that several people can play on the same cabinet, slowly unlocking more and more of the game — essentially crowd sourcing completion of the game. You also cannot continue in this mode, so you can’t just credit feed. 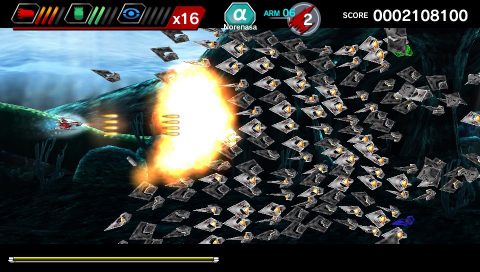 Another Chronicle remained arcade-exclusive until 2015, when it was ported to the PlayStation 4, Vita, and PC, now featuring the subtitle Chronicle Saviours. It includes everything from the arcade version, with all of the additions from the EX Mode. An adaptation of the Chronicle Mode is also included. Here, you play on a virtual cabinet, and your status is uploaded to the cloud and shared with all other gamers on the same cabinet, mimicking the experience of the arcade game but across the internet. The view is obviously letterboxed to fit on a 16:9 display, but the PC version allows you to use two monitors together, allowing for a nearly arcade authentic experience.

Also included is the new CS Mode. This is similar in concept to the Chronicle Mode, except it lacks the cloud sharing and is only for a single-player. It features a few hundred new challenges, with stages representing the Darius storyline. Some are themed around previous Darius games, featuring classic music, and there are some new bosses, too. There’s also a new ship, the Murakamo, which includes Options you can position – it’s loosely based on the ship from the Taito shooter Tokio. Since this version was balanced for home play, the screen has been zoomed in a little bit. It’s still letterboxed, but the view is 21:9 compared to 32:9. 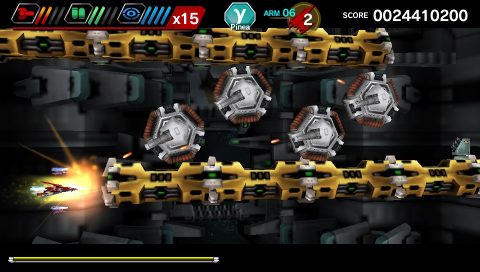 You also gain points after completing each stage, based on your score, which are used to unlock different ships and customize your firepower, instead of using the predetermined configuration for each challenge. There’s also the Event Mode, which in the arcade allows players to download new missions. Additional DLC features ships from other shooters, including Metal Black, Night Striker, and RayForce (Taito); Fantasy Zone, Space Harrier, and Galaxy Force II (Sega); DeathSmiles, Dodonpachi Daifukkatsu, Ketsui, and Progear (Cave); Side Arms and Varth (Capcom); and Battle Garegga, Soukyuugurentai, and Mahou Daisakusen (Raizing), along with music from their respective games.

The amount of content in this release in unchallenged by any shoot-em-up on the marketplace. It is a bit repetitive though – you’re still fighting through the same stages, and the same bosses, just in a different order. However, the size is possible because the game went through so many revisions – each one adds new ships, bosses, and stages, creating one mega game. 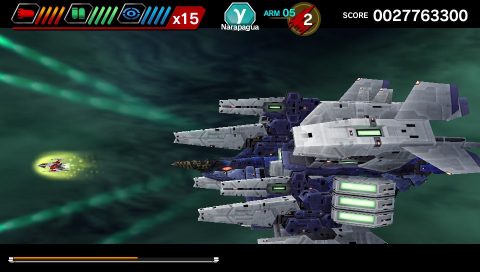 This is particularly true with the music. Even through the PSP release is a bit dull, the soundtrack is top-tier Zuntata, consisting of an ingenious blend of wailing guitars, distorted synth vocals, operatic choirs, bombastic orchestral masterpieces, and thumping techno beats. The Another Chronicle soundtrack one-ups this – the album features six “suites”, some of which are more than seven minutes long. These feature live chorales singing instead of the synthesized vocals of the original Burst OST (and previous Darius games), and some of the tracks are positively chilling. Chronicle Saviours compiles both of these soundtracks together, along with a bunch of new music added to the SP version, and adds  more new music, including a cheesy vocal track, “Freedom”, sung entirely in English.

As a final bit of Taito fan service, one of the bosses transforms into the golden dragon from Syvalion. The music is even a remix of its theme. 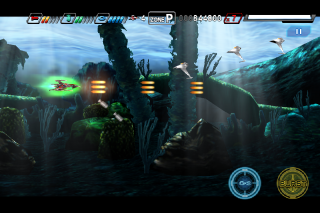 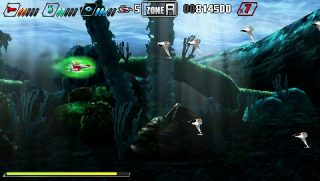 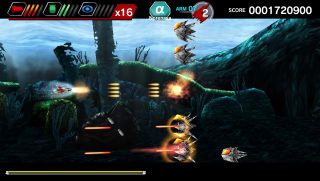 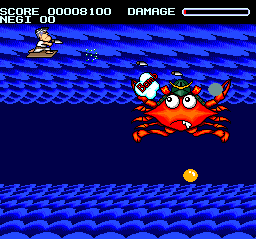 Ultrabox was a series of PC Engine discs that included a variety of software, including mini-games. The sixth (and final) release includes a Darius parody called Dasaiyas (above), a shooter where you control a flying sushi chef fighting fish. There are six levels in total, with branching paths. Simple but fun.

Darius has been referenced in many other Taito games. Space Invaders DX includes a “Parody Mode” which replaces the sprites and backgrounds with different Taito games, including The NewZealand Story, Liquid Kids, and Darius II. Space Invaders ‘95 amps up the goofiness and has two playable ships based on the Silver Hawk, with the pilots named Bonnie and Clyde. Rainbow Islands (above right) has a stage called Darius Island. Bubble Symphony has a stage called Sun A Zone, based on the first level of Darius II, and features two bosses, including the Yamato hermit crab. One of the Bakushou!! Jinsei Gekijou games also has a Darius minigame.