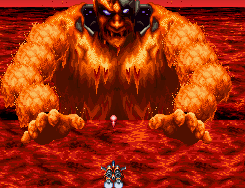 When it came to shoot-em-ups, many developers shirked the SNES in favor of the PC Engine or Mega Drive. The common belief was that the SNES’s slow CPU just couldn’t keep up with the fast paced action required, as seen in Gradius III. How much truth this has is questionable, but the SNES library of shooters, while decent, paled next to the other 16-bit consoles. 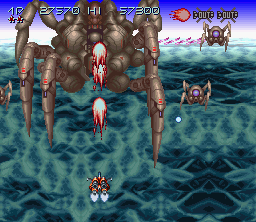 And then there is Axelay — not only the best shooter on the SNES, but one of the best of the 16-bit console generation. This isn’t just a case of a diamond in the rough shining the brightest, either, because it really is a beautiful game in its own right.

Axelay takes after the philosophy of Life Force and Salamander, in that there are six stages in total, each alternating between side-scrolling and overhead perspectives. The catch with Axelay is that the overhead stages have been slightly skewed at an angle, somewhat similar to Silpheed. The landscapes scroll using a Mode 7 effect which stretches the terrain, making it appear that you’re flying over the horizon. It may seem hokey now, but it was quite an impressive effect when it was introduced, and the use of multi-plane scrolling creates a uniquely fake impression of 3D. 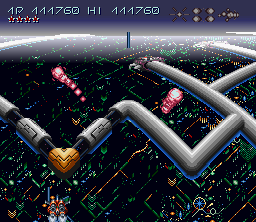 Gimmicky effects notwithstanding, Axelay is also a gorgeous looking game. While many 16-bit shooters tended to be on the bright side, Axelay is darker and moodier, with the extra detail allowed by the SNES’s color palette enabling a particularly gritty atmosphere. The locales — a trip through the clouds, a Gundam-style O’Neill cylinder space colony, a futuristic city, an underwater cave, and the final enemy battleship – pack an amount of detail into each tile that is perhaps only rivaled by Irem games like R-Type Leo.

The bosses, too, are memorable, especially the ED-209-style (from Robocop 2) robot walker, which treads backward awkwardly while using rotation effects to move its shield-like helmet. The final boss will attack with an unavoidable droid that, at first, seems completely harmless. Then you realize that it’s actually scanning and replicating your ship, as it sends out wave after wave of identical ghost fighters, each mirroring your shots. 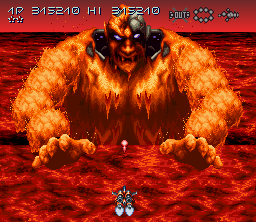 Much of the atmosphere is aided by the fantastic soundtrack supplied by Tarou Kudou, whose only other major composition was Super Castlevania IV. Like many of Konami’s arcade shooters, each boss has its own theme, which is usually a darker, more intense variation on the level song. Its heroic trumpet-based motif, repeated in more than a few tracks, is the kind of legendary music that sticks with you for years afterward. It makes good use of voice clips, too, like the “Arms installation is complete. Good luck!” after selecting weapons, and the “Earthling approach!” warning, accompanied by klaxons, when coming up on a boss.

Axelay is much more than just fancy graphics and sounds, though, as its genius can be traced to its weaponry system. The ship’s offensive abilities are divided into three systems — primary, secondary, and missiles — which are cycled through with the L and R buttons. At the beginning of each stage, you pick which weapons to equip in these slots. The primary weapons include the Straight Laser, a standard powerful shot; the Needle Cracker, which fires many small lasers that track enemies around the screen; and the Wind Laser, which shoots an array of four lasers across the screen. 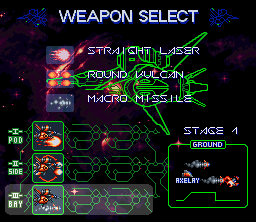 The secondary weapons are less powerful but more versatile. The Round Vulcan fires two shots, which rotate slowly towards the front of the ship if the fire button is held down, and rotate towards the back when it’s released. Careful mastery of this weapon is required in the first moments of the game, where your ship is completely surrounded by small enemies, and you must use the Round Vulcan to cut through the crowd. The other secondary weapon is the Morning Star, which creates a circle of small bullets that rotate around your ship and expands outwards.

Missiles can technically be fired at any time, although activating them as the primary weapon allows use of more powerful projectiles which explode on impact, inflicting extra damage. The only difference between the three types is what direction they fly in — either they travel forward, downward at an arc (like traditional Gradius missiles), or straight downward. This only affects the side scrolling levels, as they function identically in the vertical levels. 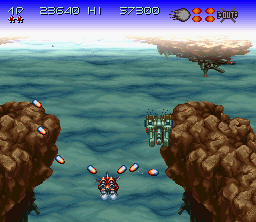 This weaponry system also foreshadows the brilliant Radiant Silvergun, in that there’s no one best weapon, challenging you to pick the most suitable one on the fly. The only unfortunate aspect is that the extra weapons are opened up during the course of the game, and the full arsenal is only available in the final stage.

Axelay is also a bit easier than most arcade shooters, as getting hit by a projectile will only disable your equipped weapon. Naturally, if all of your weapon systems are damaged, or you ram into something, your ship will be completely destroyed. Your ship will automatically be resurrected upon death, although losing all of your lives sends you back to the beginning of the level. It feels more tuned to home play than most of Konami’s other shooters. 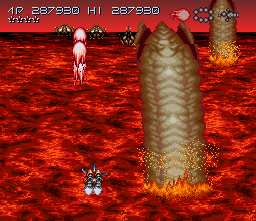 The only bummer is the ending on the hardest difficulty, which promises to “See you again in Axelay 2!” Of course, this send-off now seems like a cruel taunt, as a sequel was unfortunately never produced.