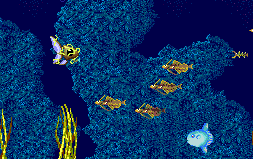 Pack-In-Video published this game! Pack-In-Video is a publisher you’ve probably never heard of, though if you played video games in the 80s and 90s you’re definitely familiar with their work. They’re responsible for Predator, Die Hard, Terminator 2, Rambo, and Knight Rider for the NES. Pack-In-Video is the developer that ported Minesweeper to the PC Engine CD, a system for which one can use a mouse, and opted not to program mouse support into Minesweeper, a game designed to be played with a mouse. Basically, anyone who knows Pack-In-Video by name knows them only because over their fifteen years of existence, they were responsible for some of the most infamously horrible games of all time.

Now, Die Hard is a bad game, but it has some interesting ideas going on in it. Rambo is a buggy mess, but it too, has some ideas. Deep Blue is a totally different story. You would think a horizontally scrolling shooter on a system with tons of competing shooters would have to be pretty good to stand out. Nope. Deep Blue is not only the worst one available on the TurboGrafx-16, but possibly the worst of any to be released on a major game system. Pack-In-Video is in peak form here. The music is a tinny joke, your ship is barely animated save for its gigantic “eye” which changes colors as you take damage. All the weapons your ship is capable of using are horrendously underpowered, and they lose power as you take damage so you may as well reset the game the instant that happens. You also may as well reset the game because you only get one life in a game about hundreds of giant fish flying at you forever while you have this stupid pea shooter gun that can barely destroy anything! 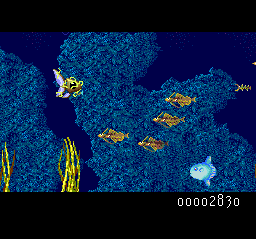 There is nothing in the game to make up for how stupidly unbalanced your ship’s pathetic weapons are. The graphics are a joke, and yet the entire game is “letterboxed,” as if there was some incredible animation on display they needed to show as little of at a time as possible to save memory. Nope, each background is extremely boring, and the color palette is so limited that your ship will change color in some levels. I should say most since the game only has four levels, and if you were to beat it successfully, the act would take you only twenty minutes even if you’re new to the game! This game cost $39.99 in 1990, think about it.

The craft you pilot is referred to in the manual as an “A.N.G.E.L. Fish Attack Sub” repeatedly. A.N.G.E.L. doesn’t actually stand for anything. It was obviously just thrown in at the last second without a care as to if it was a good idea or not. Sounds kind of like this entire game! The story is that there’s some aliens invading and mutating fish so you have to destroy all sea life on earth. Then when you beat the final boss the game fades to sepia, a cursive “Next” is displayed, and your system then hard locks.

Let’s talk about Deep Blue‘s awesome shooting action. You move extremely slow but all enemies move at light speed and the game throws tons of them at you constantly. They also all have very small hit boxes, and all of your weapons produce extremely thin blasts of energy, so get ready to miss everything all the time. Even better, whenever you collide with an enemy, your ship is “stunned” for a second. So every time you take damage, for split second you cannot move, attack, or pick up any weapons that pass by because they just pass right through you while you’re taking damage! 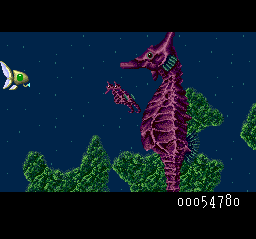 Right in the first level, there’s a type of enemy that flies out from the right side of the screen, it then stops whenever it’s lined up with you and just sort of floats up and down there for way too long. Then like fifty of these things fly out, enjoy taking unavoidable damage as the screen is filled with a bunch of tiny krill you can’t hit that just won’t go away! A similar foe appears in the last level. It’s like they realized the entire game was broken and needed some way to challenge you at the very beginning and the very end since you’d otherwise spend the entire game not moving.

How can someone beat the game so fast by not moving if it’s so unfairly difficult? Well, your A.N.G.E.L. Fish Attack Sub regains life by not shooting. Between this, the insane enemy patterns, and the weakness of your guns, the way to beat the game is to stay in the extreme upper left corner and not shoot anything that isn’t coming right for you. You’ll miss out on power ups since the game intentionally makes them appear as far away from you as possible, but who cares when all the weapons are so bad anyway? You end up regaining more life than you lose to enemies by just staying in one spot and not trying to fight back. Incredible game design Pack-In-Video.

This would be a good time to talk about Pack-In-Video itself some more, but after Deep Blue ends there are no credits before the game freezes. No credits can be found in the manual either. Perhaps the developers did not want to be individually recognized for being responsible for the creation of Deep Blue for some reason… 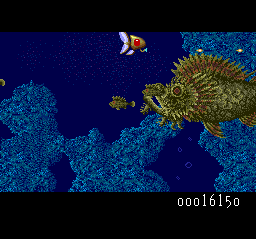 There’s no excuse for this game to be this bad at all. Pack-In-Video stinks but there’s zero logic to how the game’s encounters are designed compared to your A.N.G.E.L. Fish Attack Sub’s puny capabilities other than total incompetence. And yet, NEC chose to release this game in the US rather than objectively superior shooters like Override or Metal Stoker.

The best part of Deep Blue, however, is its legacy. It’s a horrible game, everyone who’s played it for even five seconds knows it. At the same time, fans of shooters, you NEED to play this game. Not because it’s relevant, but because it’s like a textbook guide on how to not make a good shooter. Deep Blue is one of the most poorly designed shooters you can get, it’s four levels of sea life being flung at you from the right side of the screen forever. Truly a sight to behold in person.