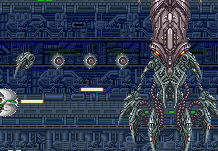 The third Darius entry, Darius Twin, was released exclusively for the SNES. It’s an average but technically competent entry on the arcade giant’s long-running, anti-seafood series.

The game seems to take place between the original Darius and its sequel, when the Belsar army stages an attack on Olga, home of the few humans who survived the evil fishes’ raid on the series’ namesake planet. Among these humans are the legendary heroes known as Proco and Tiat (not their descendants, who starred in Darius II), who once again hop into their Silver Hawks and blast off to save all of humankind. The intro mentions how 2,000 years have passed since the last war on Darius, which raises the question of how our protagonists managed to survive this long, but this plot point is forgotten as quickly as it is mentioned in typical shooter fashion, thus making this game’s story incoherent and almost identical to its predecessor’s. 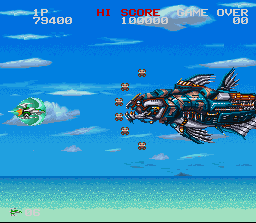 Darius Twin‘s gameplay is standard fare, with the only differences being a lowered difficulty level and a more linear stage progression system. The franchise’s trademark web of paths only comes into play after the fourth zone, thus making the third stage the same in every playthrough (Zone D), while Zones B and C are both boring starfield levels, with the only difference between them being the latter’s thicker enemy patterns. There’s also only one final stage to choose from (Zone L), with the ending you get now being determined by the path you took to get to Zone L and by the amount of lives you have lost, which makes getting the best ending a task suited only for the most hardcore of shooter fans, especially when considering the lack of continues.

Aside from the lesser number of levels, Darius Twin is obviously missing one of the series’ central gimmicks – the multiple screens. This is true for all Darius games going forward (at least until Darius Burst Another Chronicle, nearly two decades later). However, compared to the level design in other side-scroller shooters of the early 90s, it still comes across as fairly unimpressive and drab. 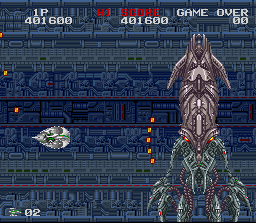 The “Twin” in the game’s title probably refers to the possibility of the simultaneous two-player co-op that it offers, something that, despite being a mainstay of the shooter genre ever since its birth, was removed from most previous Darius console ports. This, along with the fact that even the most intense boss battles aren’t enough to drop the game’s silky-smooth gameplay, makes Darius Twin a mildly impressive game for the console’s standards. The graphics and sound are average at best, though it does have a decent arrangement of Hyper Great Thing’s battle theme from the original Darius.