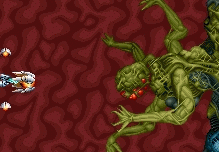 R-Type III is the first title in the series exclusively for consoles. It was developed by Tamtex, a subsidiary of Irem who worked on console games like Metal Storm and Holy Diver. And yet, in the transition, R-Type III loses none of its arcade sensibilities. 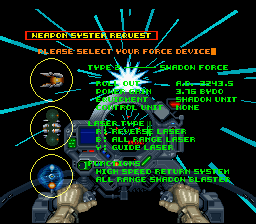 The biggest addition is the ability to choose between three different Force pods, each of which have their own unique set of weapons, plus other abilities. The Round Force is the same as in the previous games, and is suggested for ace pilots only. The Shadow Force has turrets attached to it, which auto-aim towards enemies, plus it loosely shadows your movement. And the Cyclone Force can’t fire like the other two, but as you power it up, it creates large beams around it, which are incredibly destructive. The ship you control this time is called the R-90 Ragnarok. 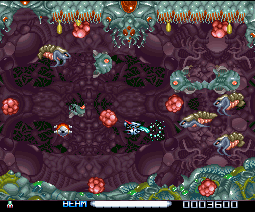 In addition to a super charged beam similar to R-Type II, you can also change to an alternate “Hyper” mode. When activated, it fires out a short range blast then lets you shoot a volley of explosive shots without having to charge at all. It’s incredibly helpful in taking down bosses. Technically you can activate this as many times as you want, but it only lasts about ten seconds, after which the beam needs to cool down and you can’t fire any charge shots at all.

The graphics lose the washed-out look from R-Type II, replacing it with brighter, more detailed scenery that manages to beat the original, even though it’s not quite up to par with R-Type Leo. It’s also (mostly) free of the slowdown that plagued Super R-Type and many other early SNES shooters.

The level design in general is fantastic, a real return to form after the dull R-Type II, featuring numerous memorable moments and impeccably designed (if typically maddening) segments. One of the coolest moments is right in the first stage. After shooting down a few mechas, you encounter a strong one that doesn’t seem to want to die. You dodge his shots and keep firing, in hope that eventually you’ll take him down – until, without any fair warning, he crashes right into the stage background. You can even catch a glimpse of him turning his head around in a moment of panic before he’s blown to bits by his own carelessness. 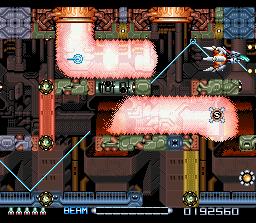 A later level takes place inside some type of giant engine, complete with moving pistons that try to crush you. A later section of this stage is routinely flooded with translucent pink lava, requiring that you navigate through the tunnels carefully and pay attention to the hatches that alter its deadly flow. Then, after defeating a miniboss, you need to navigate the same section, but in reverse. One of the bosses is a biological being that morphs into bosses from the original R-Type, including the Dobkeratops. And even further down the line you face a stage filled with blocks that are actually shape-changing aliens that home in on your ship.

Both the level and boss designs take into account the SNES’s scaling and rotation capabilities, making them feel naturally challenging without being gimmicky. The first level takes place in the frame of a space station, which rotates back and forth. The first boss flies in and out of the background, lobbing shots from a distance before settling on the playing field where it can be attacked. In one of the boss battles, there are three tracks, each with a spark that travels along it. In the beginning stages of the fight, these sparks travel predictably, but then the whole screen begins rotating, sending them in motion at strange angles, requiring incredible skill to not only dodge the sparks, but also the boss’s attacks. 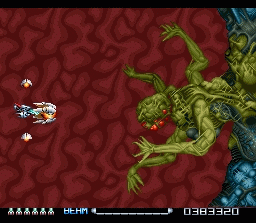 There’s quite a bit of excellent music, too. The Force selection screen, viewed from the perspective of the R-90 pilot as he rockets through space, gets you pumped up and ready for battle. The first stage theme is a remix of the first level theme from R-Type, and greatly extended. The only downside is that it overuses a particular distorted guitar sample which makes the entire soundtrack feel uniform.

Overall, R-Type III is excellent, one of the best shooters on the SNES, and the best in the series, up until R-Type Delta.

There is one minor change between the regional releases: in the Japanese version, the second stage boss fires out projectiles that look like large sperm. These were changed to gigantic eyeballs for the American release, though they still have their tails.

Beyond the SNES version, which was later released on the Wii Virtual Console, R-Type III was ported to the Game Boy Advance in 2004 by Raylight Studios, an Italian developer. Unfortunately they were not provided with the original source code and had to replicate the game from scratch. On the surface it looks good, with the only major compromise seeming to be the smaller field of view owing to the portable screen. But it soon gives way to more severe problems, including sketchy hit detection and other bugs that make the game way more difficult than it already was. While there’s a password option, when you run out of lives, you have to start from the beginning of the level, rather than a checkpoint. The music also sounds terrible. 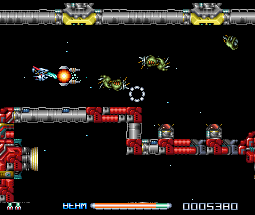 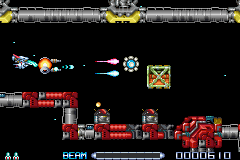 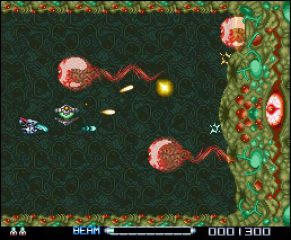 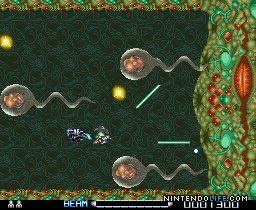