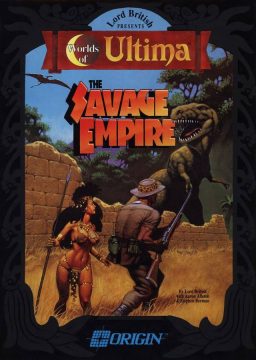 Since the development of the Ultima VI engine was a huge and rather expensive undertaking for Origin from 1988 to 1990, it makes good sense to use the thing for more than one game. While Origin’s A-teams were working on the next installments of their flagship series, Wing Commander II and Ultima VII, some of their newer designers got together and used the False Prophet game as a base to create new adventures for the Avatar. These adventures would take place in entirely different settings than Britannia and were released under the Worlds of Ultima label. Neither of the released Worlds of Ultima games are strictly canon, but chronologically they would take place between The False Prophet and The Black Gate. 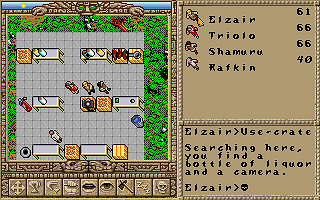 As the story goes, the Orb of the Moons, the artifact that allowed you to rescue Lord British in Ultima V and plays a major role in the plot of Ultima VI (it’s even included as a feelie in the box) allows the Avatar to travel to new realities by opening red Moongates. Commanded by Lord British to learn more about the stone, and having nothing else to do now that his adventure in Britannia is over, the Avatar takes the stone to his old friend Dr. Rafkin, curator of the local natural history museum. You’re busy being bothered by a journalist from a sensationalist magazine when Dr. Rafkin’s experiment goes horribly wrong, sucking you all into a strange and savage land where you are immediately attacked by a large, flying dinosaur. Welcome to the Savage Empire! 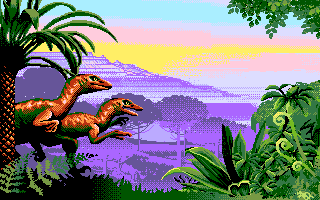 The game takes place in the valley of Eodon, a forgotten land where dinosaurs and other prehistoric creatures live alongside humans. The humans of Eodon live in tribal societies and have been drawn into the valley from different places on Earth, including Central America, North America, Africa, Polynesia and others. It’s a true lost world, and the Avatar’s job is not only to rescue himself and the others who were sucked in from Rafkin’s accident, but save the entire valley from a monstrous insectoid threat planning to use the tribal infighting to wipe the humans out. 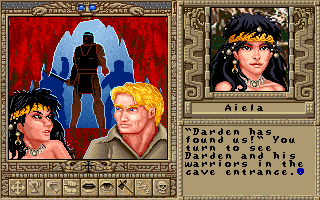 While the main Ultima games take their inspiration primarily from a combination of Tolkien, Dungeons & Dragons and the Society for Creative Anachronism, The Savage Empire is one long, genius love-letter to victorian-era adventure novels and the action stories of the pulps. There’s references here to the Lost World by Arthur Conan Doyle, the Journey to the Center of the Earth by Jules Verne, She and King Solomon’s Mines by H. Rider Haggard, and a healthy helping of dinosaurs, a lost tribal civilization (with over a dozen tribes!), giant ants, shamanistic magic, and even a scantily-clad ‘native woman’ that would look perfectly at home being menaced by a fanged monster on a pulp cover. Even the game’s manual is written and presented in the style of a trashy magazine of the early 1900s: a periodical for adventurers, with articles written by the Avatar and Dr. Rafkin cleverly disguising the game’s backstory and the lore of Eodon.

The Savage Empire plays identically to The False Prophet, right down to including artifacts of Ultima VI (cheat codes can be used to get into the Realm of the Gargoyles, though the color palette is broken, and there’s a headgear equipment slot hard-coded into the engine which the game never actually uses). You can interact with pretty much any object or piece of clutter lying around, just like in Ultima VI. Try digging up your own clay from a riverbed and firing it in a kiln to make a clay pot, or make your own bandages by harvesting yucca leaves and weaving them on a loom. The amount of detail in the Savage Empire does the Ultima name justice, with all NPCs having their own personalities and fair amount of dialogue, even the non-plot essential ones, and each human tribe has their own accent, clothing and customs. There’s plenty of hidden sights and secrets to dig out of the land of Eodon, giving the game tons of replay value like the best games in the main Ultima series. Amusingly, quite a few classic Ultima characters have dopplegangers here, including lookalikes of Shamino (Shamuru), Iolo (Triolo) and Dupre (Dokray), as well as Warren Spector as major antagonist and later ally Dr. Johann Spector. It seems that including references to Warren in Origin games was sort of a de facto requirement at the time (like the spectre named Warren in Ultima Underworld). 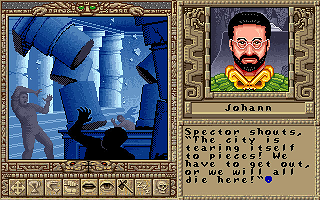 There are some differences from The False Prophet‘s gameplay, though. The magic system in The Savage Empire is extremely simplified. Neither the Avatar nor anybody else can use Britannian magic since there are no reagents to mix, and there is only one spellcasting party member in the entire game, Triolo. Triolo’s magic of spirit-summoning is done by giving one of three offering items to one of three different totem skulls, for a total of nine possible spells to cast. While useful, none of the spells are particularly essential, and spellcasting is not a major part of the game like it tends to be in other Ultimas. In addition, there’s no real character development in The Savage Empire; these people are adventure story archetypes and only exist for the one game, so don’t expect any subtle ribbing, in-jokes or long-developed sense of camaraderie like what the Avatar has with his companions in Britannia. In addition, there’s one technical improvement in the game over Ultima VI: it is the first Ultima with in-game cutscenes, provided using the Origin FX-Engine software which was originally developed for Wing Commander; as a result, the Origin-FX opening of an orchestra warming up before an image of the Earth is part of the game’s intro. 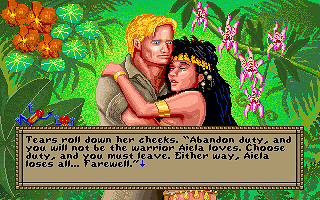 The Savage Empire never sold better than “modestly”, which is a real shame. It may play exactly like Ultima VI, but it’s an imaginative work all on its own, especially for fans of the sort of stories that inspired it. The Savage Empire was made on and released originally for IBM PC in 1990; some years later, Japan got ports of the game to the Sharp X68000 and PC-98, which are completely identical to the DOS original other than the language used. The Savage Empire also received a console port to the Super Famicom in 1995. That port is built on the same engine as the SNES Ultima VII: The Black Gate, and seems to include all attendant omissions and problems that plagued that game, including the removal of parties, the removal of all cutscenes, the removal of character creation, the removal of NPC schedules, the cutting of most world interactivity, the breaking-up of the world into indoor and outdoor maps, awful graphics and awkward controls. This version of the game was originally planned to have a North American release as well, and the localization was seemingly 95% finished when it quietly dropped off FCI’s release radar and never appeared, presumably canceled. Nobody will blame them for this. The only available information about the NA SNES version of the port is a two-page spread in the January, 1995 (no. 66) issue of Electronic Gaming Monthly, and no beta cartridge or ROM image of this version has ever appeared on auction sites or been leaked to the internet. (Page One Page Two). 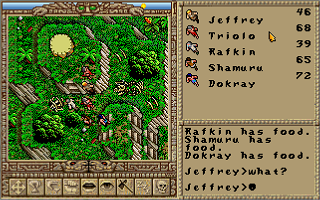 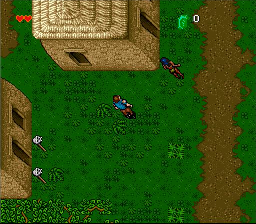