After the spectacular success of Air Zonk, one would expect that a CD sequel would offer even more of the same fast paced, inventive action of its predecessor. But something went a little bit wrong – Super Air Zonk isn’t quite on the level of its predecessor, mostly because it was designed by a different development team. It was handled by Dual, whose only other recorded work is Psychosis, another side-scrolling, rather bizarre shoot-em-up released a few years earlier for the platform. 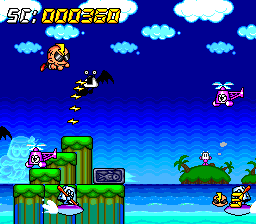 In Super Air Zonk, there are four levels to choose from in the beginning – Sea, River, Factory, and TV – while the final set of levels sends Zonk off into outer space. There’s no longer a staple of companions to choose from. Instead, midlevel, you’ll find a little creature being chased by an enemy with a net. Save it, and it’ll join your side. You can merge with it immediately, much like the similar forms from Air Zonk. You can also separate from it, after which it’ll fly around the screen for a bit doing some damage, before flying back next to Zonk to act as an Option. It’s a little more versatile than the first game in this respect. Plus, you keep the transformation even after you get hit. Some of the transformations are pretty cool, too – in one stage, you turn into a sushi chef and throw bits of raw fish across the screen, and in another, you morph into a singer, who attacks with swirling musical notes. But overall neither the companions nor their weapons are quite as silly as the first game.

Additionally, removing the ability to select your companion ruins a lot of the experimental fun of the original. There aren’t even as many main weapons as before. You can collect meat to upgrade your standard weapon – from your regular gun to miniature lightning bolts, and then up to a powerful laser gun. It’s cut the original arsenal roughly by half. To be fair, you can now shoot the flowers several times to change the type of power-up you’ll receive. And if you fire continuously for several seconds, you’ll shoot out a ring of lightning bolts (in the US version) or piles of poop (in the Japanese version) when you let go of the button. Happy faces no longer give you points either, but rather they give you an extra life once you’ve obtained 100 of them, like in the main Bonk games. 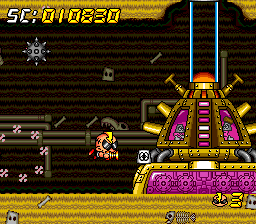 The levels aren’t quite as interesting either. As opposed to the open air levels of the original, each level now has full terrain to fly through, but it’s all pretty slow paced, there’s a lot of empty space in the stages, and overall they feel a bit boring.

At least some of the boss battles are pretty cool. At one point, you enter into the head of a robot and need to destroy its mechanical heart. In another stage, a TV station, you fight what resembles a sign board, who announces and counts down its attacks on a digital display.

The visuals have taken an odd step back, too. In still shots, it looks about the same, as the sprite work is great. But it has lost all of the cool parallax scrolling of the original Air Zonk, making the world feel strangely flat. 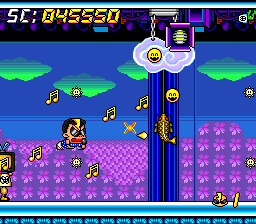 The addition of redbook audio music should be a strength, and it is, sporadically. As the title suggests, there’s are a few rockabilly tracks, a genre of music you don’t often hear in video games. These tracks are great! A handful of vocal tunes are also featured, including the introduction, which shows off Zonk’s powers, and the game over music, where the singer croons in despair as Zonk trudges off into the sunset (until you choose to continue anyway). The rest of the music has a light-hearted tone, but they tend to be really boring, and overall the soundtrack pales in comparison to the awesome chip music from the first game.

Taken on its own, Super Air Zonk is a fairly passable shooter, but it just lacks the energy of the original. Plus, it has worse graphics, worse music, less interesting weapons, and duller levels. There’s some amusing stuff in it, but mostly it’s still a bit of a disappointment all around.

Super Air Zonk was one of the last Super CD titles released in North America, and like many of these late releases, is incredibly pricey. Meanwhile, the Japanese release is fairly inexpensive. It was also released internationally on the Wii Virtual Console, where it was criticized for being slightly more expensive than the original Air Zonk despite being a marginally lesser title.