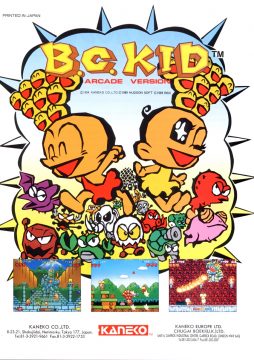 The arcade version of Bonk is dubbed Kyukyoku! PC Genjin, or “Ultimate! PC Genjin,” and was developed by Kaneko rather than any of the console development teams. While it looks similar in style, it’s structured quite a bit differently from the console versions. You’re given a level select with approximately thirty different stages. Each stage is extremely short, and the goal is to get the end as quickly as possible, all while trying to rack up a high score. There are various sports items you’ll find lying around the stages, like basketballs – as long as you continue to dribble it while moving, you’ll get bonus points. And ripping a page right out of Super Mario World, there’s a goal post at the end of each stage, with a target that moves up and down, granting more points if you hit it at its apex. After completing three stages, you get to select from one of seven boss battles. 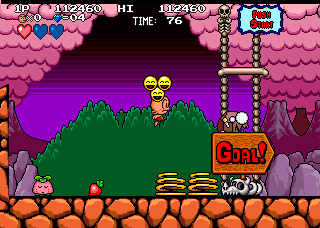 On the surface, it plays similar to the previous Bonk games, but some major things have changed. There are no power-ups, for starters. You can grab smiley faces, which attach themselves to Bonk’s head and can be used to either absorb enemy projectiles or extend the length of your own attacks. Strangely, you no longer bounce off foes when you dive bomb them – instead, you just keep falling until you hit the ground, which is bound to throw off a lot of Bonk fans. It’s also two-player, with the second player taking on the role of a female Bonk, who looks similar to the makeup-clad Bonk from the PC Engine games. 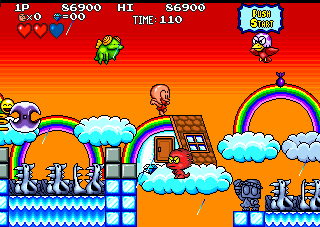 Graphically, it’s a step up from the TurboGrafx installments. Like Super Genjin 2, the sprites are a bit smaller, but the detail in both the background and characters looks fantastic. Overall, it’s interesting to see the Bonk games reimagined into a time/score attack setting, but its disjointed nature feels lacking compared to the console games, and loss of power-ups and altered controls don’t do it many favors either.