Created by a small company named Success, Cotton is a cutesy shoot-em-up featuring an adorable little witch. The early entries are fairly standard side-scrolling shoot-em-ups, and mostly rely on the adorable pink-haired main character, named Nata de Cotton, who rides a broom, attacks with magic spells, and has one of the most hilarious death screams in all of video gaming. 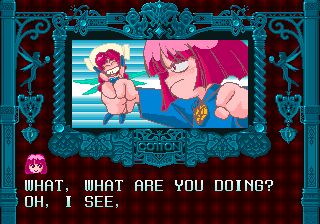 As far as the controls, there is a regular shot and a bomb button to attack enemies on the ground. Destroying enemies and picking up items will increase your “experience” gauge, a fancy name for your primary weapon power. Bad guys will drop crystals of one of four different colors – yellow will grant extra points, orange will bestow extra experience, red will give you a single use red magic spell, and blue will similarly give you blue magic. You can shoot these crystals midair to cycle through the colors a la TwinBee. 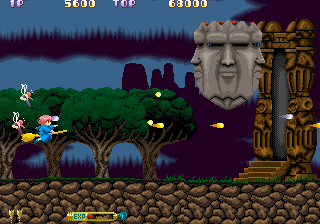 The two types of magic have both offensive and defensive properties. By charging up the main power shot, you can cast a super strong attack – a flaming dragon for red and a lightning shot for blue. These are extra useful because you’re also temporarily invulnerable when casting them. If you charge both the attack and the bomb buttons, you’ll cast the spell as a defense attack – blue will give you a bubble barrier, while red will surround you with flames. It’s a strategic trade-off, because while the red flame dragon is relatively weak, the flame shield is super powerful; comparatively, the lightning spell is the strongest in the game, while the bubble barrier isn’t all that useful. You can obtain up to four spells at once.

Additionally, Cotton is accompanied by a fairy named Silk, and you can find more as you play, up to five. The fairies act as Options, following Cotton and providing extra firepower, and they’ll also engage with an enemy they touch, pummeling them with their tiny fairy fists until they perish. You can command a fairy to attack by charging the bomb button. Whenever Cotton dies, one of them will sacrifice themselves and explode, clearing the screen for when the heroine reenters the fray. 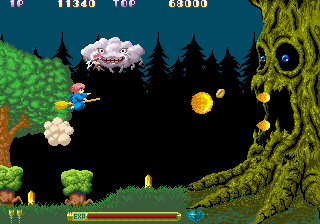 Unfortunately, whenever you get killed, your weapon level drops down in half. Considering that some of the enemies can take several hits before exploding, dying too many times in a row can force you into a position that’s difficult to escape from. The enemy attacks are relentless, and Cotton is a fairly large target, at least compared to other shooters. You can only continue once in a stage before starting over, making the game even more difficult.

Despite the seemingly cutesy theme, Cotton doesn’t rely on pastel graphics and goofy boss characters like Parodius – this game is downright dark, as Cotton flies through dank caves, flaming volcanoes, and gothic castles. There are some weird boss characters too, including a cloaked skeleton, a Cleopatra statue with a lion head in its stomach, and a plant creature with one ugly face. 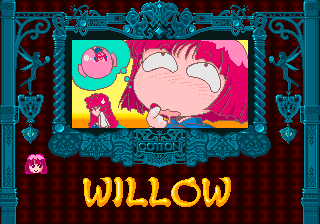 The cutscenes after each level provide some levity. Cotton is obsessed with candies called “Willows”, which are so good that she will demolish anything in her path just to bask in their glow. In this game, she has little interest in  helping her fairy friend. It’s all in the name of sugar. Cotton also loves tea – the game declares “Tea Time” after defeating a boss, where tea cups rain from the sky. These grant a few points, but if you avoid all of them, then you get a mega score bonus.

The original Cotton was released in arcades for Sega’s System 16 board. The most well known port is for the TurboGrafx-16 Super CD, published by Hudson, which was in North America. The resolution is lower and the color palette is different, but in spite of some extra slowdown it’s largely a faithful translation. The only change is that the color cycling on the gems is quicker. The biggest addition is the awesome redbook soundtrack, provided by T’s Music – the arcade game’s music was rather subdued, but here it’s a guitar-laden rockfest similar to Dungeon Explorer II and Ys. The cutscenes are now voiced too, but only in the Japanese version. The Japanese version does offer the option for English text, though. 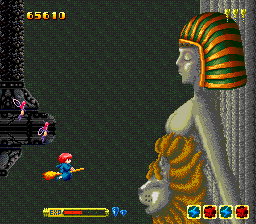 Cotton was also ported to the X68000, published by EA Victor. Not only it is an excellent port of the arcade game, but it included some subtly enhanced visuals, rebalanced difficulty, and some different boss designs and patterns. A couple of bosses were changed totally, like the Cleopatra statue, which was replaced by a dragon snake. It was also released on the PlayStation under the name Cotton Original. This is a straight port of the arcade game, though the music was run through a cheap sounding synthesizer. The arcade game’s FM synth was nothing to write home about so it’s not a huge loss, but it still pales greatly compared to the majestic TG16 soundtrack.

Finally, Cotton made an appearance in portable form for the Neo Geo Pocket Color. It’s a solid port for a handheld, even keeping the cutscenes and the parallax scrolling during gameplay. An English release of the NGPC port exists, though it was only distributed in Europe. Additionally, there is a port to Japanese mobile phones. 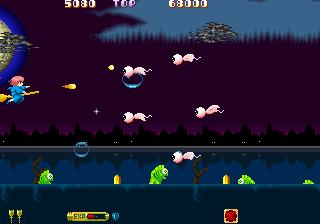 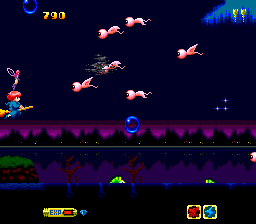 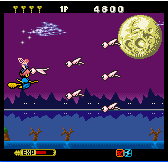