By 1994, the TurboGrafx-16 had been long dead in America, and it was clear that the Super Famicom was the system of choice in Japan. After laboring so hard to support NEC’s systems, Hudson finally threw in the towel and brought the next Bonk game to Nintendo’s 16-bit system. Unfortunately, they didn’t seem to have learned after the issues with Bonk 3. The shrinking/enlargement power-ups still aren’t particularly interesting, and the level designs aren’t really up to par either.

There are still plenty of completely random stages – you start off in what appears to be modern Japan and go through an amusement park. One stage consists of several areas where you go through a dinosaurs body, including the circulatory system, the intestines, and the heart. (Strangely, the boss of this level is named Blue Balls, undoubtedly a result of naive Japanese developers trying to speak English.) There is one stage that takes place on the Moon in low gravity, although it’s quite hard to control Bonk in these levels. 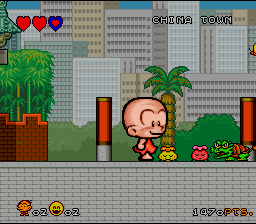 There are a few changes and additions to the power-ups, at least. As Tiny Bonk, you can scream the word “RAGE!” which manifests as flying letters across the screen, which bounce back and forth. These are essentially makeshift platforms allowing you to conquer a few particular stages. In his agitated state, Bonk transforms into a weird looking dude with huge eyebrows who can freeze enemies in their tracks. When in Giant mode, Bonk transforms into a Godzilla-like creature whenever you eat the big meat, and grows an even more bizarre ostrich body when agitated. You can also pick up and carry bouncing flowers, allowing you to find lots of hidden stuff.

The best addition is the inclusion of branching levels. Like the previous Bonk games, the stages themselves are fairly short, but some levels have alternate exits which take you to different areas. It’s still a fairly short and easy game, but at least there’s a bit to explore in multiple playthroughs. There are no post level bonus games any more – you just get extra lives for grabbing smileys, although they can occasionally be used as fare for elevators to skip parts of certain stages. 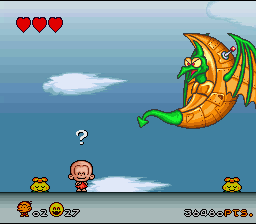 The two player mode has been removed, for better or worse. The graphics have technically improved with the move to the Super Nintendo, but while there’s a lot more detail in the sprites and backgrounds, overall it seems much less colorful. The music suffers the same fate – despite being technically superior, seems a bit lacking, despite the addition of cutesy little sound effects when you kill an enemy or take damage. Once again, it’s an alright game, but seems lacking compared to its predecessors. Although it was released in America, it’s quite difficult to find. The Japanese release is far more common.