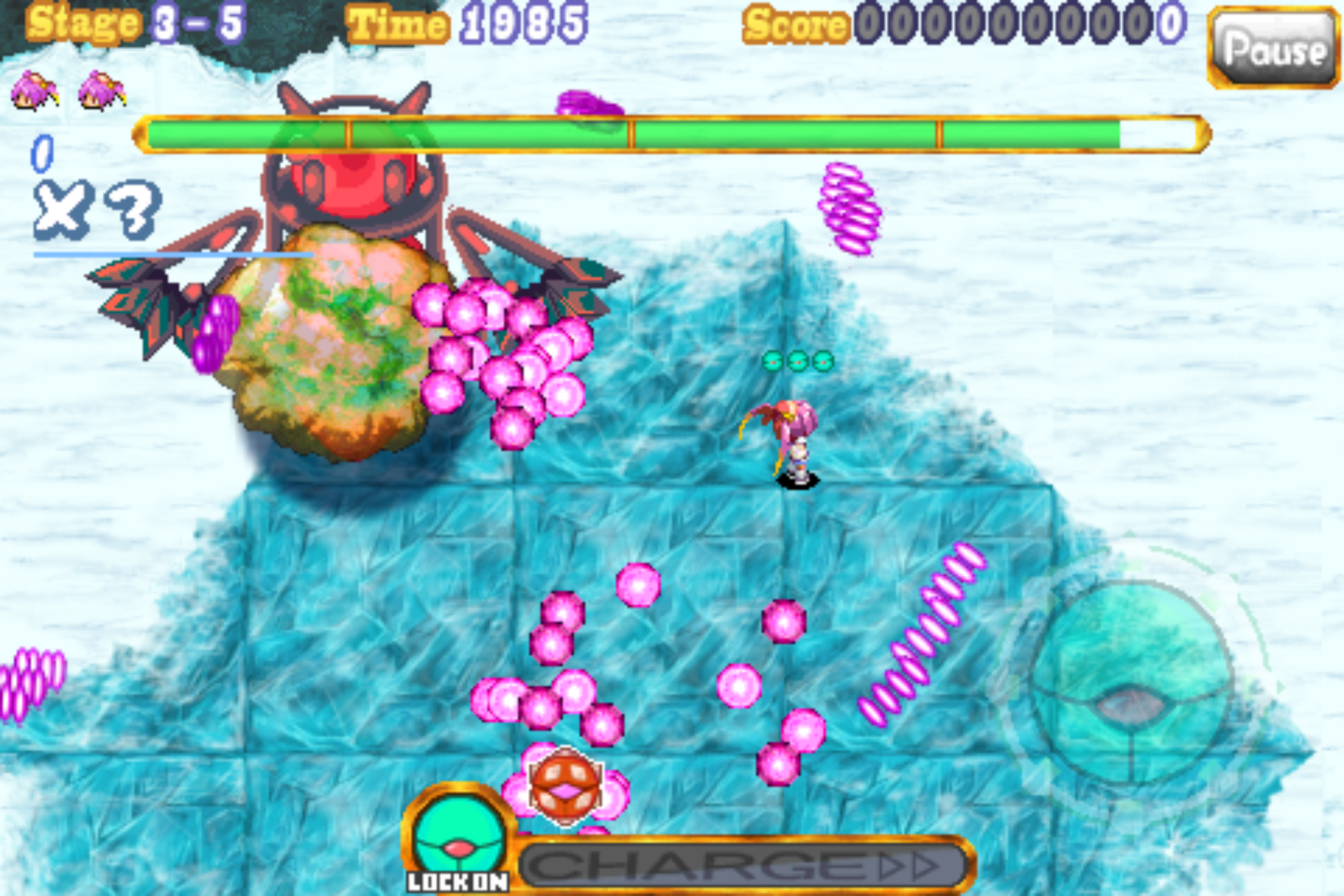 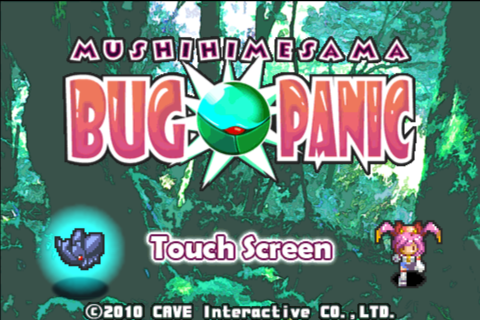 Developer Cave is known for its bullet hell shmups. What people often forget is that Cave is also a business, requiring money to develop new games. Since its founding, Cave has remained financially in the black, allowing them to continue making their beloved shmups. However, in the late 2000’s, it became clear that there just wasn’t enough money in the shmup market. During that time, Cave’s very future would constantly depend on their latest game, with failure likely forcing the company to shut down, permanently. Despite their best efforts to fix their situation, this truth remained unaltered. However, on another side of the globe, another technological advancement was rapidly picking up pace: the rise of the smartphones. At that time, the mobile market was booming at incredible speed, with software companies making millions overnight. Could this be the answer to Cave’s financial woes? While Cave has ported their games to various consoles in the past, current generation devices did not have the power needed to faithfully reproduce their arcade games. This ultimately led to the creation of Mushihime-sama Bug Panic, a new game designed exclusively for smartphones, but with a surprising twist: the game would not be a shmup.

But is it really that big of a surprise? When looking at the bigger picture, Reco and Mushihime-sama were really the only plausible options Cave had for a mascot character at the time. From a marketing standpoint, using the faceless old man named Colonel Schwarlitz Longhena or the mechanical bee Hibachi from DoDonPachi would probably not move more units than a cute 15 year old girl could. Cave also felt that the world of Mushihime-sama and Reco were diverse and interesting enough to expand upon in future games, as they did with Uo Poko‘s spiritual-sequel Puzzle! Mushihime-tama. When compounded with the future of shmups being bleak, at best, and non-existent at worst, Cave needed to actually take a risk and develop in a new genre or die a slow, miserable death. Cave’s motto is “shinu ga yoi,” or “dying is good,” but like the super players of their games, Cave would rather exhaust all resources than suffer that fate.

Mushihime-sama Bug Panic takes place after Mushihime-sama Futari, with the death of Queen Larsa, Palm now lives peacefully with Reco in Shinju Forest. Suddenly the Koju are going wild, ignoring Reco and attacking Kiniro! Things only get worse as Palm and Hirow are overwhelmed and unable to help! Left with no other choice, Reco grabs her burst seeds and attempts to get to the bottom of this disturbance.

The current goddess of Shinju Forest. Her Burst Seeds can purify any area they are thrown.

The 9 year old younger brother of Aki, and son of Queen Larsa of Utakata palace.

A 15 year old girl from Amagase village, and current protector goddess of Koju for the Tsukiyo peaks. Knowledgeable about the Koju insects, dinosaurs and levitation energy as well, but has few opportunities to show it off.

Each world contains 5 increasingly difficult stages. Stages 1-4 completed by reaching the goal on the map, and stage 5 consisting of a fight against the boss of that world. The goal of the non-boss stages is guide Reco through the stage, defeating all the Koju in an area and touching a glowing white orb to unlock the next area, repeating this until a stage exit/goal is opened. Hidden in each non-boss stage are Kabutan beetles that have been encased in amber. These Kabutan pieces are used in a jigsaw puzzle mini-game. Finding the Kabutan beetles in Adventure mode unlocks puzzle pieces to solve the puzzle. Doing so unlocks an exclusive piece of art. Boss stages have one goal: beat the boss. This is easier said than done, as the game throws shmup level bullet patterns at Reco, that when combined with spotty controls, many cheap deaths.

The story is told through short comic-style cut scenes that appear in the first and last stage of each world. Aside from the main Adventure mode, Mushihime-sama Bug Panic of a Score Attack mode, placing Reco in an area filled with bugs in either Timed, or Endless modes. Mushihime-sama Bug Panic also contains a Multiplayer mode, where two players compete to see who the better bug buster in a timed arena is. The multiplayer mode is playable over Bluetooth, or Wi-Fi internet connection…but good luck finding an opponent. The game did originally have global leaderboards, but have since been taken offline. 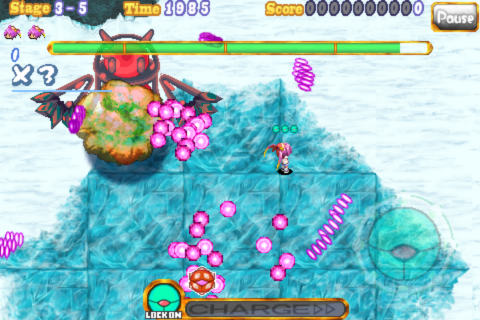 The menus in Mushihime-sama Bug Panic are navigated by simply touching the desired option, but in the game, Reco’s actions are controlled by a virtual movement joystick on the bottom left corner of the screen, and a virtual Burst Seed joystick on the right. The player can adjust the movement joystick through one of three virtual joystick options: fixed, free, and auto-correct. The first option, fixed, places the joystick in the bottom left corner, which can be cumbersome on tablets. The second option, free, has the joystick fix its position around where the player touches, and is also the best of the three options. The third option, auto-correct, has the joystick location adjusted as the character moves. Regardless of choice, movement can only be initiated on the left side of the screen.

Pressing the Burst Seed joystick has a targeting reticule appear over Reco, which can then be moved independently. Moving the target reticule over an enemy will cause it to lock onto that enemy. Reco can lock onto up to 3 enemies or the same enemy multiple times. Releasing the Burst Seed button causes Reco to throw Burst Seeds at her locked on targets. Holding the Burst Seed button will cause the Burst Seed bar at the bottom on the screen to charge. When fully charged, the next volley of Burst Seeds thrown is transformed into stronger (yellow) “Cluster Seeds”, creating a small cloud that damages nearby enemies. When an enemy is defeated, it will drop amber gems for points, or possibly a drop of “Explosion Sap”. Collecting 10 drops of Explosion Sap creates a red “Explosion Seed.” These Explosion Seeds serve as an auto-bomb mechanic when Reco gets hit (preventing her from losing a life) or can be thrown manually by further charging a Cluster Seed. Reco can store up to three Explosion Seeds. 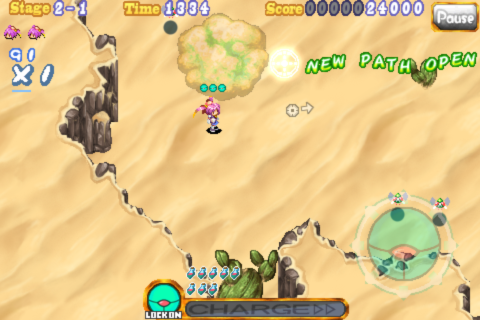 In Mushihime-sama Bug Panic, Reco can only be hurt by having a bullet or enemy touch the glowing circle in the center of her sprite, just like in Mushihime-sama. Getting hit without an explosion seed will cause Reco to lose a life, lose them all in a stage and its game over. A game over in Mushihime-sama Bug Panic simply sends the player to the stage select screen, allowing the player to try the stage again. Reco will start the game with 2 lives, but will gain an additional life, each time the number of game overs matches the amount as her current maximum lives, i.e. at 5 lives, getting 5 game overs increases Reco’s maximum lives to 6.

Mushihime-sama Bug Panic contains a scoring system similar akin to DoDonPachi. With a combo gauge with a combo timer constantly ticking down to zero. Hitting Koju with a Burst Seed or otherwise canceling bullets will increase the combo gauge. Defeating certain enemies will transform all bullets onscreen into amber gems. The timer is reset whenever an enemy is hit, or an amber gem is picked up. The timer also decreases at a slower rate when charging an Explosion Seed. Destroying an enemy will cause the base value of the enemy multiplied by the current combo value to be added to the player’s score. Note that the numerous, respawning tiny flies found in each stage do not increase the combo gauge or score, existing only to reset the combo timer. As the combo value increases, Reco will pick up amber gems from farther away. Getting hit, or having the combo timer run out will reset the combo gauge to a 1x multiplier. Amber gems provide a set score increase and drop when enemies are destroyed (along with Explosion Sap). Finally, completing each stage will offer a bonus for the number of amber gems collected times 100 points, the time remaining multiplied by 50 points, subtracted by the number of lives Reco lost, worth 10,000 points each, the remaining value is then added (or subtracted) to the score for that stage.

So, the obvious way to getting high scores is to maintain a high combo multiplier. But how do we do that, since the combo timer will usually run out well before Reco can reach the next group of enemies. As stated earlier, the tiny fly enemies reset the combo timer when it, and by properly timing your attacks, these little buggers can keep a combo going throughout an entire stage! Of course, this method also requires knowing the layout of the stage and enemy placement for maximum effectiveness.

The original Mushihime-sama was Cave’s first game on their SH3 hardware, and demonstrated the power of the system in addition to being a very fun game. Mushihime-sama Bug Panic, Cave’s first iOS game, couldn’t meet these standards, failing to be technically impressive, or fun. The controls are dodgy, often missing or dropping movement inputs. The game is boring and repetitive, and gives player very little incentive to continue. But there isn’t anything technically broken with it, so it’s not a bad game. At least the music, provided by longtime Castlevania composer Michiru Yamane, is pretty good. But otherwise, who knows what Cave was trying to accomplish with Mushihime-sama Bug Panic; the game desperately wants to break free from the shmups Cave normally create, but it just can’t due to how specialized the company has become.