Bonk’s second outing is everything a sequel should be – an expansion on the levels from the original along with plenty of improvements and new abilities. The stages are now bigger and more open, allowing for more exploration and secrets. There are now several bonus rounds which you can enter by picking up hidden flowers, challenging you to various tasks for extra smiley faces. Speaking of which, the smiley faces have more of a purpose now – at the end of each level, you can enter an extra area based on how many you’ve collected. If you snag under 10, you don’t get anything. If you grab between 10 and 20, you’ll be rewarded with a life refill and some meat for the next level. You get more stuff as you gain more smileys, and can even potentially find life extenders, which are also hidden in the stages and add an extra heart to your life meter. In addition to his climbing abilities, Bonk can also use his head to bounce off walls, similar to Ninja Gaiden. Certain flowers will allow Bonk to fly, and you can also move the trampoline flowers by hitting them, which is a big key to finding lots of hidden stuff. It’s also a small thing, but the evil flowers – the kind that would jump out and attack instead of giving you a power-up – only take one hit to kill instead of two, which goes a long way to fixing an aggravating part of the original. 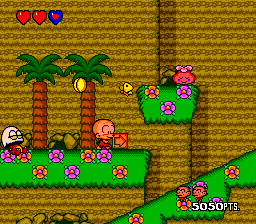 The first stage is a pleasantly peaceful romp up a waterfall, filled with butterflies and fruit. The only enemies are sleeping peacefully on the ground, and lay harmlessly as long as you don’t disturb them. There are a lot more fruit items to be found, but some of them just give you bonus points – it’s a bit strange trying to differentiate between food that will heal you and food that won’t. Generally, junk food will just increase your score, while the fruit actually regenerates life, but even that’s not true 100% of the time. 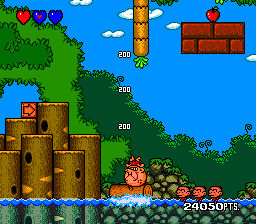 The elevators to the boss battle return, although they look metallic, and they now dramatically drop you right in the center of the arena before the fight begins. Most of the bosses lack the weird personality of its predecessor, mostly because they don’t give any speeches after you kill them, but they each blurt out a unique exclamation (“DRAT!”, “BONEHEAD”, etc) when you defeat them. The graphics are about on the same level, sending you through similar environments as the original, but adding some new stages, like a giant ship floating in the ocean. The music is also exceedingly catchy, and even reuses the excellent boss theme from the first game. Overall, with its added abilities and quality level designs, Bonk’s Revenge is usually regarded as the high point of the series. 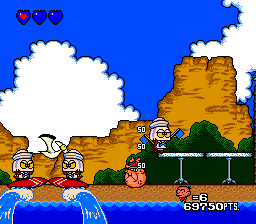 In the Japanese version, PC Genjin 2, Bonk wears make-up in his agitated form, allowing him to blow kisses or show off blinking hearts when he spins.  Instead, in the North American version, he uses the same angered sprite as he did in the original, except he now shoots fireballs, and shows a blinking atomic symbol when he spins. There’s also a sing along karaoke sequence in the ending that was removed from the English release. Bonk’s Revenge is also featured on the 3-in-1 Super CD along with its predecessor. The game development is credited to a company called Myutech rather than Atlus, though much of the staff seems to have come from Hudson. 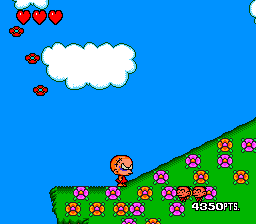 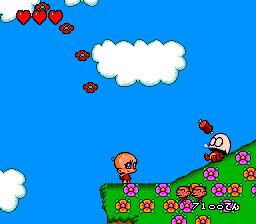