Air Zonk is a futuristic reimagining of the Bonk universe. Bonk – or, technically, his descendant Zonk – has been morphed into a flying cyborg. This new hero looks mostly the same, except for a rad pair of sunglasses and a lightning bolt on his head. His Japanese name is “PC Denjin”, where the “PC” here stands for “Punkic Cyborg” and “denjin” literally means “electric person”, but more closely means “cyborg” in this case. For a short time, Zonk replaced Bonk as the mascot of TTI, the American division in charge of distributing the Turbo Duo. While there was no shortage of shooters for the TurboGrafx-16, Air Zonk actually stands out as one of the best on the platform. 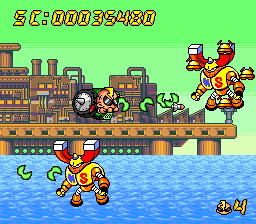 In many ways, it’s a typical side scrolling shooter, but Air Zonk stands out due to the incredible arsenal of weaponry. By himself, Zonk is equipped with a rapid fire gun. He also has flame jets in his feet, allowing him to roast enemies that get too close to his rear. There are over half a dozen standard weapons found in power-up capsules, including punching gloves, boomerangs, alligator teeth, lasers, and homing missiles. One of the most common is one which shrinks Zonk to minuscule sizes and allow you to aim in any of the four directions while moving. The weapons also have the added benefit of allowing you to take an extra hit before you get killed. You can also charge up your attacks with the I button, although not all of the weapons have a super attack. Hold it for a few seconds and you’ll unleash a bomb that will damage almost anything on the screen.

This in itself isn’t overwhelmingly spectacular, but Zonk is accompanied by ten different friends. At the beginning of each stage, you can pick one of these pals to accompany you into combat. When you grab a giant smiley face, you’ll summon your pal into combat, who floats around and acts as an additional satellite of firepower. Some of these guys are pretty weird, like the giant bulbous cow, the enormous scud missiles, or floating bubble gum machine. If you manage to keep your friend around – if it takes too much damage, it flies off – then Zonk will merge them into a completely new form. For example, if you merge with the cow, you turn into a milk bottle firing maniac. When the bottles hit an enemy, the milk acts like explosive residue and does extra splash damage. And when you merge with the baseball, you’ll turn into a pitcher who can toss a flurry of mean curve balls. Once you pick a companion, he’s out for rest for the game, forcing you to pick someone new for the next level. In other words, Air Zonk is the sort of shoot-em-up that keeps you playing, not just to see new stages, but also what kind of crazy thing you turn into and what kind of weapons you’ll wield. 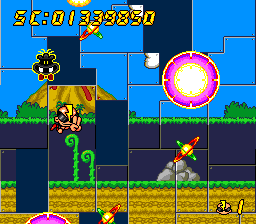 There are only five stages in Air Zonk, although they’re pretty long. Each stage takes place in open air, with no real terrain to navigate, just an onslaught of enemy patterns. It also has some of the best looking parallax scrolling on the system, and looks surprisingly natural compared to most other 16-bit games. All of the levels are artistically gorgeous, with some inventive locales – one takes place in a baseball stadium, another has Bonk flying through a futuristic fortress, with graphics from the first stage of Bonk’s Adventure painted on the background. Most of the enemies are variations on the foes from the Bonk games, including mechanical dinosaurs and such. The soundtrack is fantastic, again boasting one of the best chip generated scores on the system.

Just like its platformer cousins, Air Zonk has a fresh, cartoony feel that’s missing from the cold and sterile outer space backgrounds of most shooters. It’s definitely one of the highlights of the system and a must own. 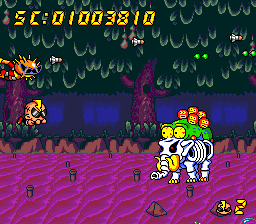 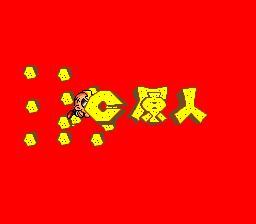 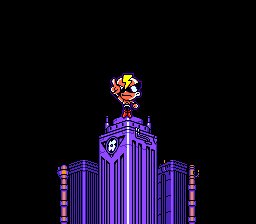 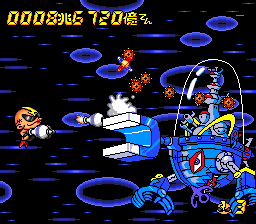 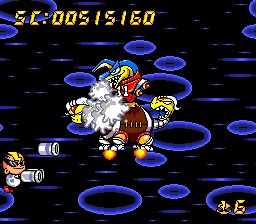 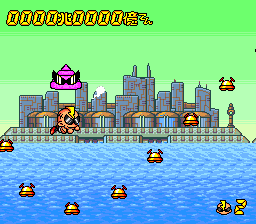 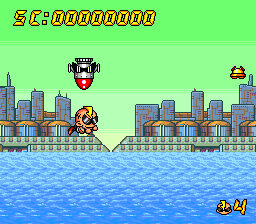